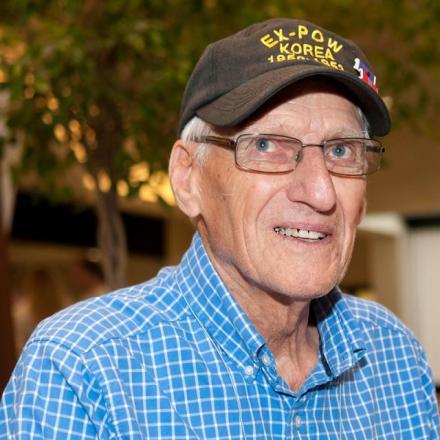 After his release from captivity, Jack Chapman started jotting down names and anything else he could remember about the men at his POW camps. Like so many others, he says he survived because of his fellow prisoners.

“I didn’t want to forget these guys because they helped take care of me,” he says. “I’m really thankful for what  they did.”

After landings at Inchon and Iwon, Chapman’s platoon was assigned to Task Force Drysdale, sent to reinforce the garrison at Hagaru-ri at the southern tip of the Chosin Reservoir. In two days of fighting, he was wounded seven times. A shot to the head knocked him out.

On the evening of Nov. 30, 1950, Chapman regained consciousness. He was in a Korean hut with other troops. They’d been captured by the Chinese.

A U.S. Marine and British Royal Marine half-carried, half-dragged Chapman on a 19-day march to a temporary camp. On the way, he met Charlie Harrison, a Marine who had been a prisoner of the Japanese for 45 months during World War II.

Harrison asked Chapman how many pairs of socks he was wearing. “Two,” he replied. Harrison told him to keep one pair under his arms, switching every time they stopped.
In a frigid Korean winter, “that saved my feet,” he says.

Chapman paid these kindnesses forward. One man lost his sight, and Chapman led him to the latrine and on work details. Another lost his feet to frostbite, and Chapman helped make wooden carts so he could get around.

Postwar life was rough. The Army offered no help, Chapman failed a re-enlistment exam, and he struggled to keep up with his job.

He felt ashamed. He went to a bar with his uncle and a couple of friends, and the bartender asked where Chapman had been lately. “My uncle says, ‘He was a POW in Korea.’ The bartender says, ‘Oh, he was one of those cowards.’ I thought my uncle was going to go across that bar. We had to get him out of there.”

The Air Force took Chapman, and he served 15 years. He was nearly kicked out for fighting, but a doctor persuaded him to turn his life around. He got an education and worked 21 years as a college police chief in Washington state.

In 1964, Chapman finally asked a doctor about his persistent headaches. An X-ray revealed a bullet in his head. Once it was removed, he felt like a new man.