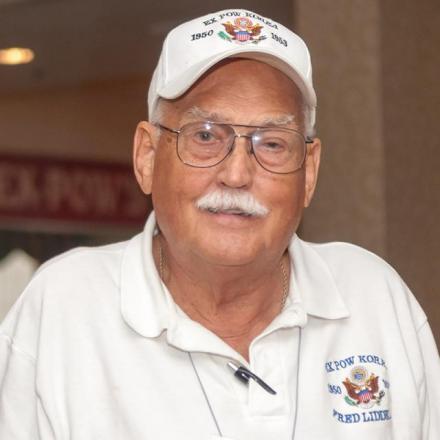 When Fred Liddell was young, he dreamed of a long line of people marching and, off to the side, a man watching them from atop a gray horse.

The day Liddell marched into Ch’ang-Song, that’s exactly what he saw. The man on the horse was the commander of all the POW camps.

The journey had been miserable, and Liddell had seen too much death. At the Suan mining camp, he and another sergeant, Obie Wickersham, had buried 36-year-old Pat Arthur, who earned the Silver Star for gallantry at Guadalcanal and was affectionately known as “Pop.” Malaria and malnutrition took Arthur’s life.

Liddell also saw abuse. For trivial offenses, POWs might be put in wooden cages, forced to sit with their legs straight.

On one occasion, Liddell was punished and made to stand against a wall with his arms out. Suddenly, his friend Clarence Young – a U.S. soldier of Chinese descent – was thrown through a door down the hall.

“They stick him right next to me,” Liddell says. “Now I’ve got somebody where I can put my arm down on his head. Finally the guard goes to sleep and I ask Clarence what he got all mad about. He says, ‘I told them the only smart  thing my grandma ever did was get the hell out of China.’ They were trying to recruit him to join their army, but he wouldn’t do it.”

Liddell left the Army on Oct. 28, 1953, and returned to his wife and 2-year-old daughter. He went to work for the telephone company in Eugene, Ore., on Nov. 5. When the company offered him stock shares, he recalled how his Chinese captors had lectured POWs on how capitalism was cheating the American people.

“I thought if the Chinese hated Wall Street so much, it must be good,” he says. “Now I’ve got all kinds of shares in AT&T that built up and split and all that. In a lot of ways, the Chinese did me some good.”

In 2009, Liddell and Wickersham were notified that Arthur’s remains had been recovered and identified, thanks in part to a dog tag Liddell hid on the body. Five years ago this month, they traveled to Arlington to finally lay their friend to rest in U.S. soil.