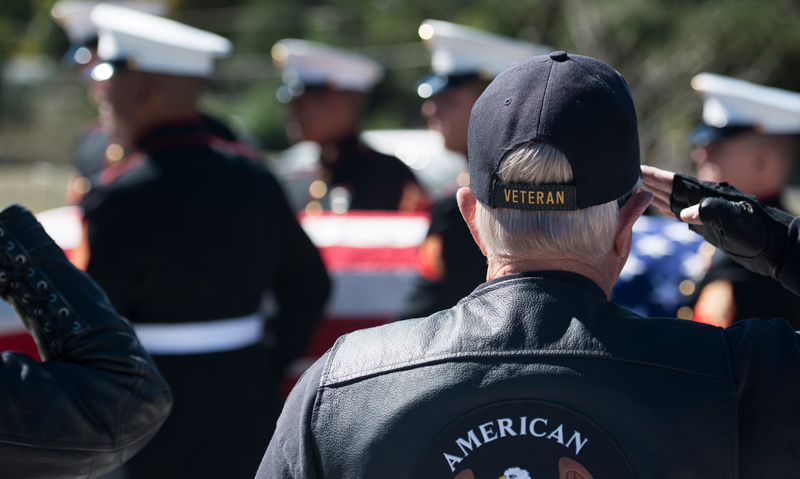 One of the eventualities in life that spouses and families of veterans face is the death of their loved one who served America in uniform. To help ease the burden on loved ones, veterans can make preparations in advance.

The first step is to make certain the family has easy access to important documents such as:

Veterans who die on active duty, or with discharges that are other than dishonorable, are entitled by law to:

Burial in a VA national cemetery

Every eligible veteran who is entitled to burial in a national cemetery as long as space is available and the following conditions are met:

Visit the National Cemetery Administration website at www.cem.va.gov for a listing of all national cemeteries and state veterans cemeteries. Send questions on benefits eligibility to VA at public.inquiry@mail.va.gov.

VA provides headstones and markers anywhere in the world for the unmarked graves of veterans who died before Sept. 11, 2001. For the marked graves of veterans who died on or after Sept. 11, 2001, double marking is authorized. Flat bronze, flat granite, flat marble, upright granite and upright marble type are available to mark the grave in a style consistent with the cemetery. Niche markers are also available for urns.

When burial is in a national cemetery or state veterans cemetery, the headstone is ordered by the cemetery, which will place it on the grave. When burial occurs in a private cemetery, the headstone must be applied for from VA. The headstone is then shipped at government expense. VA does not pay the cost of placing the headstone on the grave. The cost is borne by the veteran’s family or other party. These charges may be included in many prepaid funeral packages. VA Form 40-1330 (application for headstone) can be obtained from most funeral home directors, through veterans service officers, or through VA. This form may also be downloaded and printed out by visiting www.cem.va.gov/hmm/.

VA rules allow for custom inscriptions on headstones. Belief symbols such as Christian Crosses, Stars of David, Islamic Crescents and others are available. However, VA has limited other graphics such as logos, military decorations and fraternal organization marks. The best way to assure that you get the desired stone or plaque is by obtaining and filling out VA Form 40-1330 (Application for Standard Government Headstone or Marker for Installation in a Private or State Veterans Cemetery) and filing it with other documents. When a spouse or child is buried in the same grave as a veteran, VA will have a contractor inscribe the reverse side of the headstone. Twenty-year reservists are eligible for a headstone or marker.

A U.S. flag is provided, at no cost, to drape over the casket or accompany the urn of a deceased veteran who served honorably in the U. S. Armed Forces. It is furnished to honor the memory of a veteran’s military service.

Eligibility for former members of Selected Reserves were added by Section 517 of Public Law 105-261.

The flag will be issued once only for burial purposes and will not be replaced if lost, stolen, damaged or destroyed. National cemeteries with avenues of flags, and many state veterans cemeteries, accept donations of burial flags for mass display on Memorial Day, Veterans Day and other occasions. The standard issue burial flag is made of cotton and will not withstand continuous outdoor display. Burial flags may be obtained at VA regional offices, national cemeteries and most local post offices. Overseas, U.S. flags can be obtained from U.S. embassies or consulates VA will furnish a burial flag for veterans who served during wartime, died on active duty after May 27, 1941, who served after Jan. 31, 1955, peacetime veterans who were discharged or released before June 27, 1950, certain people who served in the organized military forces of the commonwealth of the Philippines while in service of the U.S. Armed Forces, and who died on or after April 25, 1951, and certain former members of the Selected Reserves.

You may be eligible for a VA burial allowance if all of these conditions are met:

How much does VA pay?

For a veteran’s service-related death: If the death was due to his or her service-connected disability, VA will pay up to $2,000 toward burial expenses occurring on or after Sept. 11, 2001.

For a veteran’s non-service related death since Oct. 1, 2011: If the death occurred while hospitalized by VA, it will pay up to $700 toward burial and funeral expenses.

If a veteran’s death was not due to a service-connected disability and the veteran was not hospitalized by VA, the veteran must meet at least one specific condition to receive up to $300 toward burial and funeral expenses and a $300 plot-interment allowance.

Time requirements for filing a claim

Applications for payments must be filed within two years after the burial. If the application is incomplete at the time it is originally submitted, VA is required to notify the applicant of the evidence necessary to complete the form. If such evidence is not received within a year from the date of notification, no allowance may be paid.

The applicant can apply by filling out VA Form 21-530, Application for Burial Benefits and attach a copy of the veteran’s military discharge document (DD 214 or equivalent), death certificate, funeral and burial bills. The applicant must prove the burial expenses have been paid. Downloaded the form at www.va.gov/vaforms

To obtain assistance in filing a claim, find an American Legion Department Service Officer at www.legion.org/serviceofficers or call 202-861-2700.

Payment for transporting veteran remains to a VA national cemetery

Service-related deaths: If the death is related to a veteran service-connected disability, and the veteran is buried in a VA national cemetery, some or all of the cost of transporting the deceased may be reimbursed.

Non-Service Related Deaths: If the death was not related to a veteran’s service-connected disability and the veteran was hospitalized at a VA facility, or at a non-VA facility at VA expense, or under VA contracted nursing home care, some or all of the costs for transporting the veteran’s remains may be reimbursed.

As of Jan. 1, 2000, all eligible veterans, including military retirees, are entitled to military funeral honors. The funeral honors ceremony will include the folding and presentation of the U.S. flag and the playing of Taps. At least two uniformed military personnel, in addition to a bugler, if available, shall perform the ceremony. If a bugler is not available, a high-quality recording may be used. DoD has contracted for a ceremonial bugle that does not require a trained bugler.