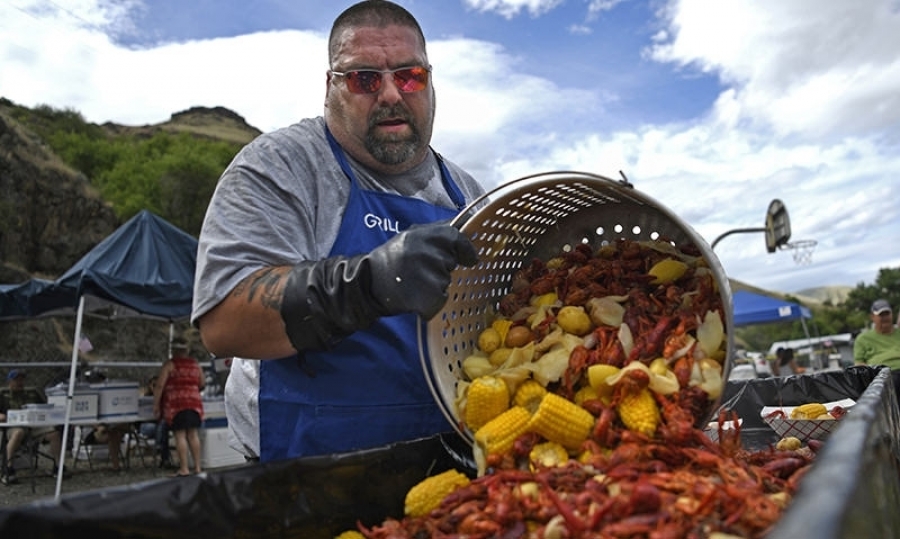 White Bird American Legion Post 152 Commander Walt Lindsey calls for attention inside the Oddfellows Hall. He wants to introduce Karen. He has just met her outside and discovered she is a veteran eligible for membership. She sits down among a group of American Legion Riders from three different states gathered at a table inside and signs her application form. She is member No. 82 of the year-old post in the Salmon River valley of central Idaho.

The entire population of White Bird is 91.

The group inside applauds to welcome Karen into The American Legion.

On the weekend leading up to the Fourth of July, White Bird is whirling with activity. A Friday “mini-romp” Legion Riders journey of about 200 miles over White Bird Hill – site of a historic 1877 battle between the Nez Perce and the U.S. Cavalry – across the undulating green and yellow quilt of grain and rapeseed fields of the Camas Prairie, down to the Clearwater River, through the reservation towns of Kooskia and Stites, and back along one of the river’s sparkling forks – has just been completed.

The Hydrant, a store and patio bar next-door to the Oddfellows Hall, is having its grand opening in White Bird this same weekend. Owned by Post 152 member Homer Brown, who takes veterans on therapeutic Salmon River boat adventures – a formative purpose of the post that also coordinates 4-wheeler trips into the mountains and other activities for those who have served – the Hydrant is home base for Brown’s Hammer Down River Excursions jet-boat business.

On the eve of the post’s biggest fundraising event of the year, the town’s Legionnaires are anxious about the late arrival of live Louisiana crawdads coming by Federal Express. Timing is everything with live crawdads.

Lindsey breathes a sigh of relief when someone whispers to him that the Styrofoam crates have finally arrived at the commander’s home up the river. Now, the question is whether or not the quantity is right, which will have a lot to do with the net performance of the fundraiser. The post has also screened T-shirts that depict a smiling crawdad on a chopper, waving a flag, on his way to White Bird. The shirts say “Annual Crawdad Boil” without indication that it’s the second such feed, so the shirts won’t be outdated and can be sold later if they don’t all sell during the weekend.

Post 152, featured on legion.org last summer and in The American Legion Magazine in September 2017, consists largely of Desert Storm-era and younger veterans. The post has quickly grown – 268 percent over its 2018 membership target – having established an identity in the bottom of a canyon where mobile-phone service is sketchy but community service is essential.

The post has stepped up to work as a team, helping pump water to the town when the supply went dry for two weeks after last Thanksgiving and, on this particular crawdad boil weekend, promoting a Sunday breakfast to raise funds for a new fire hall. “I had a guy talk to me today who said, ‘You guys are helping everybody. How do I get to be a part of that?’ It would be our fatal flaw,” Lindsey says, “… if we went into a veteran vacuum. Our success relies on involving the community, and the businesses.”

The first White Bird mini-romp has drawn riders from as far away as Bellingham, Wash. One couple rode over the Rocky Mountains from Missoula, Mont. Another rider, past Idaho American Legion National Executive Committeeman Tom Mattice, rode six and a half hours from Wendle, Idaho, to be in White Bird for the weekend to help set up tables and awnings, boil and serve Cajun-style crawdads that will help the post raise $40,000 to build a new veterans memorial park at the entrance to town. “They’re from all over the Northwest because they are hearing about what we are doing,” Lindsey says. “They come into this little town and see what we’re doing.”

He said one Legionnaire stopped into White Bird last fall during the water crisis and asked where the Post 152 lodge could be found. “We don’t have one,” Lindsey told the Legionnaire, who had learned about Post 152 in The American Legion Magazine. “At the time, the town was out of water. We were busy pumping water. That’s a glowing example of what we do.”

About an hour into Saturday’s crawdad boil, Post 152 Adjutant Lucky Gallegos tells Lindsey he has already signed up seven new members at the event, which is gradually filling up with visitors and locals. Gallegos is offered a new benchmark: three more, and Post 152’s membership will exceed the entire town’s population. “We’ll get that,” Gallegos says. “The night’s still young.”

To help the cause, Lindsey goes to the microphone and disrupts a play list of country and rock songs and reminds the crowd of more than 150, seated on planks supported by logs, of a breakfast Sunday morning at the Oddfellows Hall to help with the fire hall. And, he adds, “If we sign up two more members tonight, we will match the population of the town of White Bird. We appreciate all the support.”

Among the mini-romp riders were several of Post 152’s new members, including Leroy Longmore of Grangeville, who just joined the organization for the first time a few months ago, as did Army veteran John Sinclair, who has a home in the Salmon River canyon, above Lucille, a town that is actually smaller in population than White Bird. Ken Steinhaus of Parma, Idaho, is there with his wife, having become acquainted with Post 152 – and recruited into membership – when he came as a volunteer to help with the water problem last fall. Army veteran Dan Marion of Culdesac, who fueled tanks of the 3rd Armored Cavalry Division in the southern Iraq battles of Operation Desert Storm, joined Post 152 a few months ago as well; he took part in the Friday mini-romp and stood watch over the crawdads and boiling pots Saturday. Being a member, he said, “was something that I had thought about, but I didn’t have time. I used to work in Boise, six or seven days a week. Now, I have time. I’m liking it so far.”

Already, Marion has assisted Gallegos in transporting one veteran from Orofino to the state veterans home in Boise. “We need to take care of our veterans,” Marion says.

He especially enjoys being a Legion Rider. “Freedom” is why, he explains. “I call it wind therapy.”

Ret. U.S. Marine Corps Lt. Col. Loston Carter and his wife Rosie, also a former Marine and new Legionnaire, took in the weekend at White Bird, having ridden in from northwestern Washington state.

Carter, one of many Post 152 members from beyond Idaho’s borders, fought in Vietnam and rose through the Marine Corps ranks from private to officer, guided by one man and one experience. Carter’s platoon was clearing foxholes after a battle with the North Vietnamese when he found Michael Cutri, Foxtrot 2nd Battalion, 3rd Marines, lying dead, having crawled about 100 yards from the position where he was hit. “I reached down and picked him up in my arms, and I went over and laid him down with his friends. That man did something extremely heroic. He fought his way back, to be with his brothers, to die with his brothers. I spent 30 years in the Marine Corps because of him. I enlisted twice as a private and retired a lieutenant colonel. That wasn’t because of me. That was because of him. For 50 years, that has been the most important thing to me. Everything I did in my life after I turned 18, I didn’t do. He did it. When I picked him up, his soul came into mine.”

Carter wears a silver bracelet engraved with Cutri’s name and rank. He said he has recently passed along the fallen hero’s story “to a young lady. The story is hers now. I’m going to die. She will continue it. He will live on in her. What else can you do for someone like that?”

Post 152 member Paul Turpin is a retired U.S. Army Special Forces master sergeant who came for the mini-romp. Navy veteran Danny Medford of Grangeville (originally from Fort Worth, Texas) serves as a road captain for the post’s Legion Riders chapter.

Asked if there are any Legion-eligible veterans near White Bird who are not members, Lindsey says, “If there are, I don’t know them. And if I find out about them, they will be.”

Lindsey says he would like to get more Legion Riders chapters from Idaho and neighboring states to make White Bird a summer destination – sort of a mini-Sturgis for veterans – during crawdad boil weekend. “Why can’t this be that? We want to make it right, and we want to make it cool,” he says. “We’ve got people from Montana. We’ve got people from Washington. Once we get the word spread, we want to get people from Wyoming and Utah, too, because it’s a cool ride and a beautiful place to come to.”

At 6:07 p.m., Gallegos steps up to American Legion Department of Idaho Membership Chairman Matt Wrobel of Meridian – who is wearing a big, red inflatable crawdad hat – and makes the big announcement. A St. Maries, Idaho, Navy veteran in attendance has just joined Post 152. No. 92.

Lindsey, who is seated near Wrobel and American Legion Department of Idaho Adjutant Abe Abrahamson, is sweating heavily after a day over the hot crawdad pots. He is not sure how many have come, how much the prize drawings made or how many T-shirts sold. But he does know that on June 30, 2018, the post he and his friends started in a tiny town broke a membership mark that deserves a salute. “Hey, maybe we should get some kind of 300 percent membership pin,” he tells Abrahamson, whose department has now broken 100 percent of its membership target three years straight. He says membership acquisition and retention depend on posts like 152, which makes its presence felt whether it’s a water crisis, a fire hall to build, a veterans memorial park to install, a veteran who needs a ride or just a few hours on the river or straddling a motorcycle.