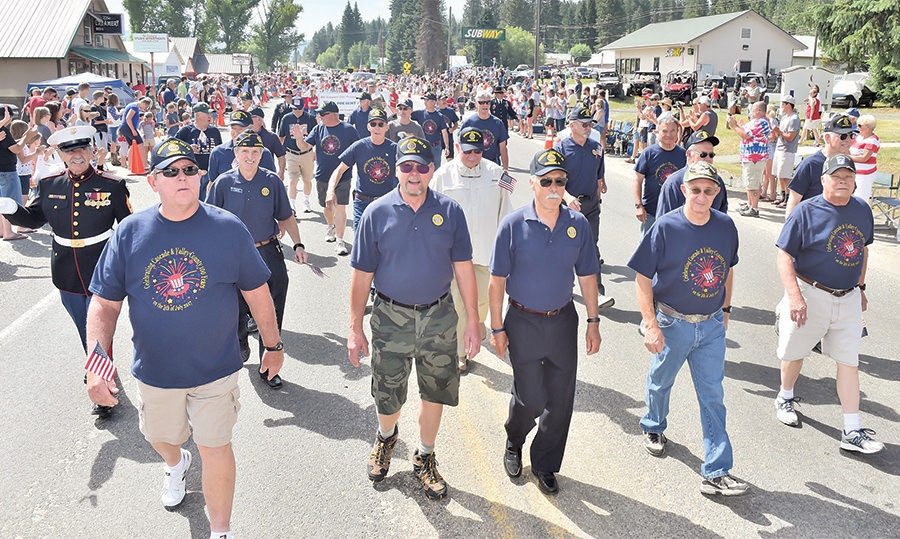 BY TOM GROTE for The American Legion

As the local chamber of commerce representative for American Legion Post 60 in Cascade, Idaho, Jack Knoblock was presented with a challenge. The Cascade Chamber of Commerce had nominated Post 60 to be the Grand Marshall for the town’s massive annual Fourth of July parade, which commonly closes the north-south highway through the town of 1,000.

“We took a poll of our members regarding their thoughts of being selected as the grand marshal, and the overwhelming answer was, ‘What a great honor,’” Knoblock said.

But there was a catch. The chamber wanted 100 American Legion and American Legion Auxiliary members to march in the parade as a symbol of the town’s 100th anniversary in July.

“One-hundred Legionnaires might be a stretch,” Knoblock thought to himself.

The post’s leadership sprang into action and mustered 100 to march on the Fourth of July -- some in their military service uniforms, some in their Legion uniforms and some wearing T-shirts made especially for the occasion.

Knoblock took a head count just before the parade and came up with 67 Legionnaires and 32 Auxiliary members. Ninety-nine. The post was just short of the goal. Then a thought hit him. “I realized I did miss one – the driver of one of the vehicles – so that made it 100.”

Those who were able walked the entire length of Main Street during the parade while others rode in a float decorated by a local family, including an LMT Vehicle provided by the Idaho Army National Guard.

The town of hundreds was filled with thousands, as it usually is for the 4th of July event known as Thunder Mountain Days Parade, who cheered in appreciation of the American Legion and American Legion Auxiliary marchers and all veterans gathered.

Cascade Post 60 supports several events each year including the 4 Summit Challenge bicycle ride each July, a Cinco de Mayo dinner, free Thanksgiving Community Dinners and a Santa Party for kids at Christmas. The post’s Friday Night Dinners are popular in the community, as well.

On Memorial Day each year, post members travel to various cemeteries in the Cascade area for formal ceremonies, rifle volleys and the playing of Taps.

This year was not the first time Post 60 members had marched in the Thunder Mountain Days parade. The parade has traditionally been led by a color guard of Legionnaires but never – until this year – 100 representatives of the organization. To learn more about the post, go to www.post60news.com.