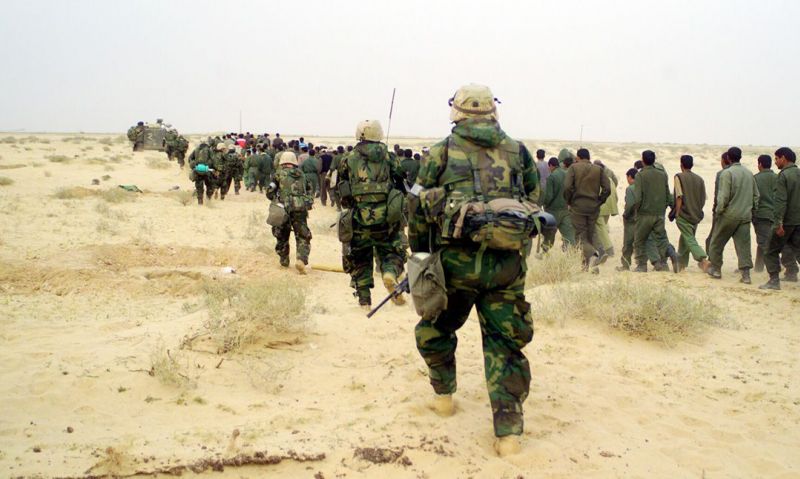 The Special Operations raid that eliminated ISIS leader Abu Bakr al-Baghdadi was codenamed Operation Kayla Mueller, in memory of one of Baghdadi’s many victims. It’s a timely reminder of the overlooked importance of these operational codenames. They tell our enemies – and us – a lot about America.

For the U.S. military, the use of operational codenames didn’t really take hold until World War II. Gregory Sieminski details the evolution of U.S. military codenames in a fascinating essay he wrote for Parameters. “In early 1942,” Sieminski explains, “members of the War Plans Division culled words from an unabridged dictionary to come up with a list of 10,000 common nouns and adjectives that were not suggestive of operational activities or locations.”

The War Department may have been inspired by British Prime Minister Winston Churchill, who “was fascinated with codenames” and “selected them for all major operations,” according to Sieminski. Government Technology adds, “Churchill personally chose Operation Overlord for the Allied invasion of German-occupied France in June 1944.” Churchill reminded military planners to be cognizant of the fact that human beings would carry out these operations. Never should a “widow or mother ... say that her son was killed in an operation called ‘Bunnyhug’ or ‘Ballyhoo,’” Churchill advised.

In addition to Overlord, World War II gave us such memorable codenames as Operation Dynamo, the rescue of 338,000 British and French troops from Dunkirk, which arguably saved Britain from invasion and defeat. Yet amid the jubilation, Churchill shook his countrymen back to reality: “We must be very careful not to assign to this deliverance the attributes of a victory. Wars are not won by evacuations.”

Speaking of operations that were never executed, Operation Downfall was “the grand plan for the invasion of Japan,” as an Army history recounts. Downfall “contemplated a gargantuan blow” against Japan. Indeed, it was so large and so complex that it enfolded two other codenamed operations: Operation Olympic, which would liberate the southern island of Kyushu in December 1945, and Operation Coronet, which would liberate the island of Honshu in March 1946.

Those super-secret weapons, in turn, were birthed by a codenamed war effort known as the Manhattan Project. Also key to the war effort were “Magic” and “Ultra” – codenamed initiatives tasked with breaking the Axis Powers’ codes.

Berlin and babies As world war gave way to the Cold War, the United States and Britain launched a humanitarian operation to rescue the besieged city of West Berlin from Stalin’s blockade. The Americans called it Operation Vittles. The British dubbed their part of the Berlin Airlift Operation Plainfare.

After 15 months, 277,000 missions and 2.3 million tons of supplies delivered, the airlift’s last flight was flown by a British Dakota cargo plane aptly emblazoned with the words “Psalm 21 Verse 11” on the fuselage: “Though they plot evil against you and devise wicked schemes, they cannot succeed.”

The Vietnam War includes several operational codenames that have become part of America’s military-history lexicon and lore: Operation Rolling Thunder (the bombing campaign against North Vietnam from 1965 to 1968), Operation Linebacker I and Operation Linebacker II (an even heavier bombing campaign targeting North Vietnam in 1972), Operation Frequent Wind (the massive helicopter-borne evacuation of 1,373 American civilians, 5,500 Vietnamese nationals and 989 Marines from Saigon at the end of the war), Operation Babylift (the rescue of 2,600 orphaned Vietnamese children), and Operation Homecoming (which brought home 591 American POWs).

Goals After the Vietnam War, the Joint Chiefs of Staff further formalized the process of generating operational codenames and nicknames, as military writer Tim McMillan details, “by unveiling the Code Word Nickname and Exercise Term System, colloquially known as NICKA.” NICKA guidelines bar the use of terms that are “inconsistent with traditional American ideals or current foreign policy, offensive to good taste or derogatory to a particular group, sect or creed, or offensive to U.S. allies or other free world nations,” McMillan explains. Additionally, NICKA prohibits “any two-word combination voice call sign found in the Joint Army Navy Air Force Publication Call Sign Book…words that may be used correctly either as a single word or as two words, such as ‘moonlight’ ... (and) exotic words, trite expressions or well-known commercial trademarks.”

The 1980s gave us codenames such as Eagle Claw (the attempted rescue of American hostages held by Iran in 1980), Urgent Fury (the intervention in Grenada in 1983), El Dorado Canyon (the airstrikes against Libya’s terrorist and military infrastructure in 1986), Earnest Will (the protection of civilian vessels in 1987-1988 from Iranian attacks), and Praying Mantis (a 1988 operation launched in response to Iranian hostilities in the Persian Gulf).

In December 1989, President George H.W. Bush authorized Operation Just Cause in Panama, after an unarmed American serviceman was killed, two servicemen were injured, and an American woman was threatened with sexual assault.

Just Cause and Desert Shield/Desert Storm the following year reflect an effort to use operational codenames as a way to convey mission goals to the public – and inspire the troops, as underscored by Gen. Norman Schwarzkopf’s message to the men and women under his command: “Soldiers, Sailors, Airmen and Marines of the United States Central Command. This morning ... we launched Operation Desert Storm, an offensive campaign that will enforce United Nations resolutions that Iraq must cease its rape and pillage of its weaker neighbor and withdraw its forces from Kuwait ... During my visits with you, I have seen in your eyes a fire of determination to get this job done, and done quickly, so that we may return to the shores of our great nation. My confidence is you is total. Our cause is just. Now, you must be the thunder and lightning of Desert Storm.”

The mission to end a manmade famine in Somalia was dubbed Operation Restore Hope, conveying America’s intent “to enable the starving to be fed,” in Bush’s words. “We must give them hope.”

Signals This trend of using codenames as a way to convey mission goals to the public continued in the early phases of the global war on terrorism. Operation Infinite Reach, for instance, was the codename given to the barrage of missile strikes against Osama bin Laden’s al-Qaida network in response to bombings in Kenya and Tanzania in 1998. Hitting targets in Afghanistan and Sudan simultaneously, Infinite Reach was intended to signal that the United States could reach literally anywhere.

The U.S. military response to the 9/11 attacks was initially called Operation Infinite Justice. However, that codename was replaced with Operation Enduring Freedom in reaction to an outcry from some Muslim groups, which argued that “in the Islamic faith such finality is considered something provided only by God,” as the BBC reported. This foreshadowed the difficulties the Pentagon would encounter naming the campaign against ISIS.

Infinite Justice wouldn’t be the last time the United States changed an operational codename. The initial name for the U.S.-led maritime coalition responding to the latest spate of Iranian attacks in the Persian Gulf was Operation Sentinel. But due to the sensitivities of members of the coalition, the mission was rebranded the “International Maritime Security Construct.”

Twenty-eleven produced a trio of important U.S. military operations and memorable operational codenames: In response to the tsunami in Japan, the U.S. military launched Operation Tomodachi (Japanese for “friend”). Soon thereafter, the United States joined other NATO allies in Operation Odyssey Dawn, which aimed to protect Libyan civilians from their own government. And in May 2011, a team of Navy SEALs conducted operation Neptune Spear, which eliminated bin Laden.

That dovetails nicely with the military campaign against ISIS. It pays to recall that ISIS was an outgrowth of al-Qaida in Iraq. Anti-ISIS operations technically began in the summer of 2014, as the ISIS blitzkrieg bore down on the outskirts of Baghdad, yet it wasn’t until mid-October 2014 that the operation finally got a name.

The world noticed the delay, which serves to underscore the larger point here: The names we give our military operations are important. U.S. News and World Report criticized “Obama’s anonymous war against ISIS.” Deutsche Welle questioned “the operation with no name.” A Washington Post reporter mockingly held a contest to draw attention to the nameless mission. But it was no laughing matter. As The Hill reported at the time, troops involved in the anti-ISIS campaign “are not eligible for certain medals because the U.S. has not officially designated their efforts a military campaign.”

The reason for the delay, as Government Technology would explain, is that the codename required lots of bureaucratic review, approval from two dozen partner nations, and the OK of Joint Chiefs Chairman Gen. Martin Dempsey and Defense Secretary Chuck Hagel. Only then did the campaign against ISIS get a name: Operation Inherent Resolve – a codename so devoid of meaning that it had to be the product of a committee.

Operation Kayla Mueller, on the other hand, is anything but devoid of meaning. Joint Chiefs Chairman Gen. Mark Milley named the operation to honor a young American aid worker who was abducted, brutalized and murdered by Baghdadi and his henchmen. It’s an example of codenaming at its best – a name that gives form and focus to the mission, helps the American people understand why their sons and daughters are in harm’s way, and serves as a powerful signal to our enemies that America’s memory and reach are long.