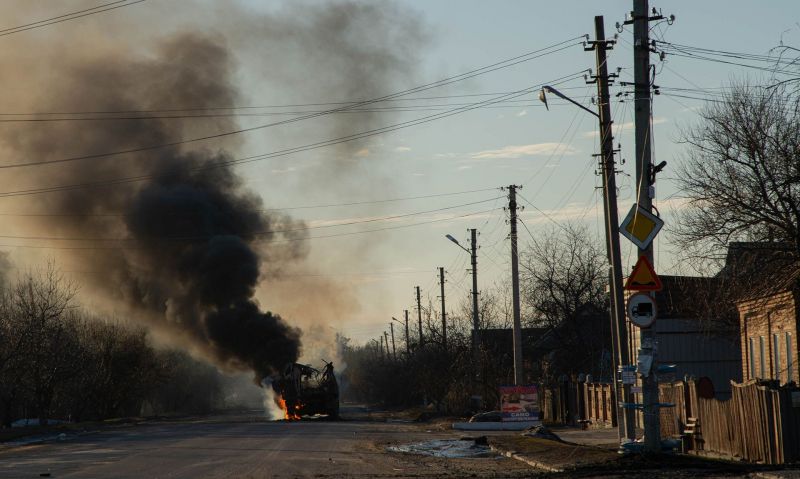 Vladimir Putin’s “unprovoked, unjustified, unconscionable war” has taken thousands of lives, destroyed much of Ukraine’s modern infrastructure and ancient landmarks, and created the largest tidal wave of refugees in Europe since World War II. Yet amidst all these horrors, there’s a flicker of hope: The NATO alliance is more united than at any time since 9/11 – and more important than at any time since 11/9. This is the very opposite of what Putin expected.

Consider how the 30-member alliance swiftly rejected Putin’s December demands that NATO not expand to include Ukraine, cease its deterrence operations in Eastern Europe and grant him veto authority over the decisions of sovereign nations. Then, as Putin massed more than 180,000 troops, hundreds of tanks and dozens of warships on Ukraine’s borders and coasts, the alliance set about the task of bolstering its easternmost members.

The United States deployed B-52s to Britain; F-35s to Germany, Lithuania and Estonia; F-15s to Poland and Estonia; F-16s to Romania; dozens of AH-64 attack helicopters to the Baltics and Poland; Patriot air-defense batteries and thousands of combat troops to Poland; an armored brigade combat team of 7,000 soldiers to Germany; hundreds of troops to Hungary, Bulgaria and Romania; and 800 combat troops to the Baltics. There are now about 100,000 U.S. troops standing guard all across Europe.

In addition, Washington approved a long-delayed sale of 250 M1A2 tanks to Poland, and surged the aircraft carrier USS Harry S. Truman to join carrier strike groups from Italy and France in a show of force in the northern Mediterranean.

Britain has deployed hundreds of troops to Poland, sent warships to the Black Sea and eastern Mediterranean, dispatched Challenger tanks to the Baltics, doubled its troop commitment in Estonia, and based fighter-bombers in Romania and Poland. Canada has deployed hundreds of additional troops to augment its battlegroup in Latvia. Germany has sent troops to reinforce its contingent in Lithuania. France has deployed hundreds of troops to Romania. Germany and the Netherlands sent Patriot batteries to Slovakia. Denmark rushed F-16s to Lithuania and sent a frigate to the Baltic Sea. Dutch F-35s and Spanish Eurofighters deployed to Bulgaria. NATO now has 130 warplanes on “high alert” in Central and Eastern Europe, more than 200 ships forward-deployed in the waters of the Arctic, North Atlantic, Baltic, Aegean, Adriatic and Mediterranean, and tens of thousands of newly deployed or repositioned combat troops in the region, according to NATO Secretary General Jens Stoltenberg.

For the first time in history, NATO activated and deployed its rapid-response force. And for just the second time in history, Turkey – acting under international authorities it was granted by a 1936 treaty – closed the Black Sea to Russian warships.

NATO hasn’t limited its response within its footprint. In a crippling blow to Russia’s economy, NATO members, the EU, Japan and other partners disconnected Russian banks from SWIFT, the global messaging system that enables financial transfers among 11,000 banks in 200 countries. Britain, Canada and the European Union joined the United States and other partners in imposing “unprecedented export control measures” to cut off Russia’s access to high-tech products. The allies closed their airspace to commercial and private Russian aircraft, seized Russian assets, and cut off Putin’s kleptocracy from the most of the world.

Specific to Ukraine, before the invasion, the United States flew reconnaissance flights over eastern and western Ukraine, shared intelligence with Kiev, and formed an airbridge linking NATO bases with Ukraine. This enabled delivery of defensive weapons from North America, Britain and Europe.

Even so, Putin’s war on Ukraine has exposed challenges within NATO. The most glaring of these revolve around Germany – namely, Berlin’s equivocation over the future of the Russia-to-Germany Nord Stream 2 gas pipeline and Berlin’s decision to block delivery of German-built weapons to Ukraine. These policies prompted some observers to ask those eternal questions: “Is NATO broken, and is it worth the trouble?”

The answer to that first question is found in the above paragraphs. It’s impossible to read Putin’s mind, but the rapidity and unity of NATO’s response surely came as a surprise to the Russian strongman. Indeed, NATO’s response the past 70 days represents the very opposite of what happened when Putin mounted his first invasion of Ukraine in 2014.

The fact that NATO didn’t prevent Putin from moving against Ukraine isn’t a NATO failure; it’s a function of the harsh geopolitical reality that Ukraine is not a member of the most important, most enduring security alliance in history. To be sure, Europe will be more stable – and NATO more secure – if Ukraine can somehow remain a sovereign, democratically oriented nation. That explains why the alliance worked so hard on the diplomatic and military front to make Putin think twice about this criminal invasion.

However, the central purpose of NATO is to deter an attack against its members and, if necessary, to defend its members from attack. Indeed, the fact that Putin has attacked Ukraine while keeping his hands off NATO members Estonia, Latvia, Lithuania and Poland underscores that he respects NATO’s all-for-one security guarantee – at least for now.

In these weeks of war, Ukraine has shown itself to be a nation of warriors and a worthy ally. Its Churchillian leader and courageous people have earned NATO’s respect – and if they survive the hell Putin has unleashed, a seat at NATO’s table. But Russia's sheer mass could be enough to overwhelm Ukraine, especially as Putin employs the beastly scorched-earth tactics he perfected in Chechnya and Syria.

As to whether the alliance is worth the headaches and heartburn it causes – especially for the United States – the answer to that question is found in both the historical record and today’s headlines.

To be sure, Germany’s prewar resistance to sending defensive weapons to Ukraine frustrated its NATO allies, and Germany's dependence on Russia’s natural gas has proven to be shortsighted. But it pays to recall that NATO overcame far more worrisome internal challenges in the past. Consider the Anglo-French deceptions during the Suez crisis in 1956, France throwing out NATO’s headquarters and pulling out of NATO’s integrated military command in 1966-1967, open hostilities between Turkey and Greece in the 1970s and 1980s, and France and Germany waging a diplomatic war against the United States and Britain in 2002-2003 over Iraq’s repeated violations of U.N. Security Council resolutions.

In spite of all of that, NATO repeatedly proves its importance to America’s security. Too many Americans forget or simply don’t know that NATO is a force-multiplier for U.S. power, a bridge to global hotspots, a backstop against great-power war in Europe, and a ready-made structure where like-minded nations with shared values and high levels of military interoperability build coalitions to defend their freedom and interests. These alliances within the alliance helped the United States liberate Kuwait, defend Saudi Arabia, wage war and keep peace in the Balkans, avenge 9/11, topple Saddam’s regime and respond to COVID-19.

Moreover, Germany has now suspended Nord Stream 2. As noted, Germany has rushed thousands of weapons systems to Ukraine. And in a truly remarkable about-face, Germany is increasing its annual defense outlays to 2% of GDP (something Washington and NATO have been begging Berlin to do since 2006), creating a $112.7 billion modernization and rearmament fund, and building a strategic LNG reserve and new LNG terminals.

“The world,” German Chancellor Olaf Scholz concludes, “will no longer be the same as the world before.” Or perhaps more accurately, Europe and the world are returning to what they were before 11/9, when the Berlin Wall collapsed.

Throughout the post-Cold War period, the alliance served as an insurance policy, just in case Moscow reverted to its old ways. And here we are.

Insurance is a good way to understand NATO. Insurance, after all, is about providing protection against worst-case scenarios. Prudent people hope they never have to use insurance, but they realize that paying a little each month or each year protects them against having to pay a lot – or losing everything – if disaster strikes. The same is true in the realm of international security.

The deterrent represented by Article V of the North Atlantic Treaty serves as insurance against worst-case scenarios. For America, NATO is a hedge against another European conflict triggering another continentwide or worldwide war. For NATO’s other members, NATO is a security guarantee backed by America. Without that guarantee, there’s no security, as history has a way of reminding those on the outside looking in, from Cold War Hungary to post-Cold War Ukraine.

Like all insurance policies, there are costs associated with NATO. A recent study revealed that U.S. defense expenditures earmarked for Europe amount to $36 billion per year. That’s not a trivial amount of American taxpayers’ money. But consider what America gets in exchange for that insurance premium: a hedge against another Argonne or Normandy, a Europe reinforced against invasion, and economic benefits that exponentially exceed those premium costs.

With Putin trying to reconstitute the Russian Empire and reverse the settled outcomes of Cold War I, NATO is proving its worth yet again. As Gen. James Mattis puts it, “If we did not have NATO today, we would need to create it.”