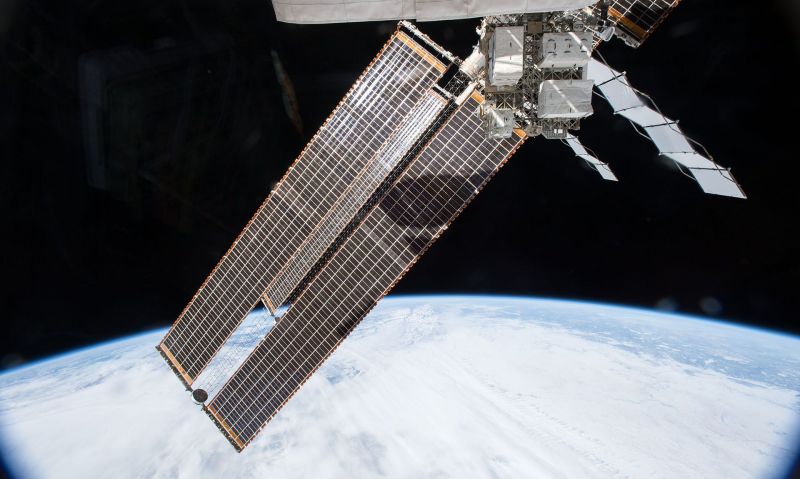 The International Space Station's main solar arrays and radiators are pictured as the orbital laboratory soared 253 miles above the northern United States.

“There are no rules or very few rules,” Gen. John Raymond, first commander of the U.S. Space Force, recently said of the domain his young branch is charged to defend. “It's the wild, wild West.”

To underscore just how chaotic the heavens have become, consider a handful of recent developments and events.

Russia last month threatened to attack Western satellites being used to help Ukraine defend itself. It was no empty threat; Moscow has proven its ability to strike orbiting satellites. In late 2021, for instance, Russia tested a ground-launched antisatellite (ASAT) weapon that “generated more than 1,500 pieces of trackable orbital debris and will likely generate hundreds of thousands of pieces of smaller orbital debris,” U.S. Space Command reports. That debris field threatened the International Space Station.

In July 2020, Russia tested a satellite-borne kill vehicle. This followed a similar test in 2017, when Russia deployed a satellite that “launched a high-speed projectile into space,” as Raymond revealed. In addition, the Russian military has deployed satellites capable of “rendezvous and proximity operations” – military parlance for maneuvering around other satellites to monitor, disrupt and/or disable them. In 2020, Pentagon officials reported that two Russian satellites had shadowed a U.S. Keyhole satellite in “unusual and disturbing” behavior.

Meanwhile, China has launched what space experts describe as “batches” of military-intelligence satellites. China also has tested this year what appears to be a fractional orbital bombardment system, designed to deliver weapons such as hypersonic glide vehicles into low-earth orbit until such time as they are needed to strike ground-based targets. The Pentagon reported in 2021 that Beijing has a robust arsenal of directed-energy weapons, jammers and ASATs designed to target satellites in low-earth orbit. Indeed, China has conducted at least three provocative and reckless ASAT tests. Beijing’s 2007 ASAT test created at least 3,000 pieces of deadly space debris.

Even friendly nations like India have conducted destabilizing and dangerous ASAT tests in recent years.

Kinetic weapons and space debris aren’t the only threat to freedom of navigation in space. Gen. David Thompson, Space Force’s second in command, recently revealed that U.S. space assets are under constant attack from electronic-warfare jamming, computer-based cyberattacks and laser flashes that blind the optic systems of satellites. “The threats are really growing and expanding every single day,” he said. “We’re really at a point now where there’s a whole host of ways that our space systems can be threatened.”

Thompson also has noted that Russian space-based anti-satellite systems have maneuvered close enough to U.S. satellites to raise concerns that the Russian weapons were prepping for kinetic strikes.

All this is bad news for responsible spacefaring nations like the United States. As Lt. Gen. David Buck observes, “Space is critical to the American way of life.” About half of the more than 2,200 operational satellites in orbit are owned and operated by U.S. firms, government agencies or military units. An attack on those satellites would cripple America’s satellite-dependent economy and render America’s citizenry blind, deaf, silenced, hungry and cut off from the world. The Space Force was created to prevent that terrifying possibility.

“Access to space, and the freedom to maneuver in space, can no longer be treated as a given,” Raymond explains.

Freedom of maneuver in space doesn’t happen by magic or accident. As with freedom of the seas, it depends on responsible powers deterring bad actors and enforcing norms of behavior. And that depends on some type of military force. “If you look back in history, every domain of warfare has a service that’s attached to it,” Raymond has observed.

The good news is that the Space Force is developing units, systems, tools, procedures, weapons and practices to transfer and apply the norms of behavior that govern military and commercial activity on the seas into the heavens. The even better news is that America is not alone in this crucial mission.

Several new initiatives, agreements and operations – along with some time-tested alliances – are yielding a growing and overlapping set of partnerships committed to developing and enforcing rules of the road in space.

Operation Olympic Defender, for instance, includes longtime allies Britain, Australia, Canada, New Zealand and the United States. Its mission, according to the Pentagon, is to “optimize space operations … enhance resilience … synchronize U.S. efforts with some of its closest allies … strengthen allies’ abilities to deter hostile acts in space, strengthen deterrence against hostile actors and reduce the spread of debris orbiting the earth.” Spain, France and Italy are expected to join this free-world partnership of spacefaring nations.

Warning that China “strives to subvert the rules-based international order, including in … space” and that “strategic competitors and potential adversaries” such as China and Russia are “investing in technologies that could restrict our access and freedom to operate in space, degrade our space capabilities, target our civilian and military infrastructure, impair our defense and harm our security,” the entire NATO alliance has committed to “maintaining secure use of and unfettered access to space” and “boost the resilience of
the space and cyber capabilities upon which we depend for our collective defense and security.”

These groupings of partner nations and allies are cooperating on space surveillance, intelligence and reconnaissance; data-sharing; detection of hostile space activities; hardening and protection of space assets; resilience of space-based systems; space launches; and quite likely on defensive operations in and through space.

Whatever we label this puzzle-set of partnerships – a space coalition of the willing, guardrails for the final frontier, a long-overdue extension of the rules-based international order into space – it is a vital tool for deterring our enemies on and above the earth.