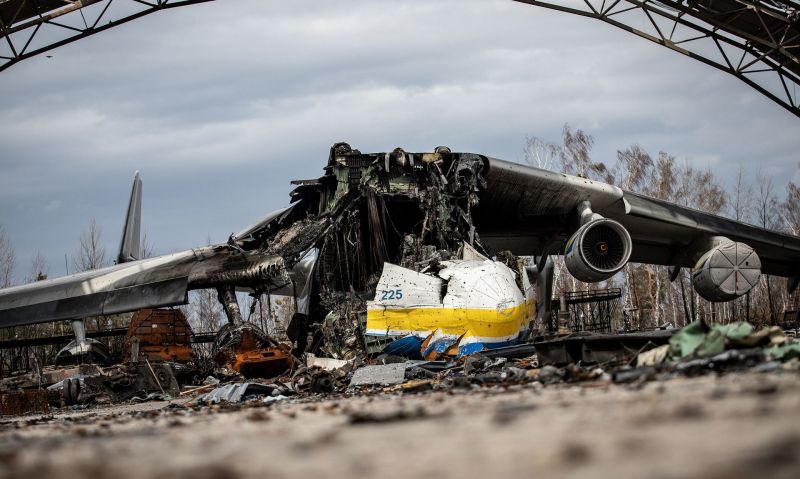 The Antonov An-225 Mriya, the largest aircraft ever built, was destroyed during the Battle of Antonov Airport.

Yet on Sept. 21 – seven months into a war that was supposed to be won in three days – Putin was forced to order 300,000 retired and reserve military personnel back into service. Over the following four weeks, 200,000 Russian men fled to Kazakhstan, 70,000 fled to Georgia, 66,000 fled to European Union countries, and thousands more to Turkey and Mongolia. In addition – or subtraction, in this case – at least two Russian men dragooned into Putin’s war of war crimes fled by boat to Alaska, where they have sought asylum.

As of this writing, more than 400,000 Russians have escaped their country. All the while, an army of citizen-soldiers – a seemingly limitless supply of warriors representing the whole of Ukraine – continues to volunteer, fight and sacrifice for their country.

Even before Putin’s September callup, nearly 4 million Russians had fled. At one point in September, 10,000 Russians were fleeing into Georgia – per day – to avoid Putin’s blood-soaked debacle. Wealthy Russians are paying $27,000 per seat to escape their homeland via private jets.

Those Russian men unable to evade mobilization are, by and large, untrained, unequipped, undisciplined and unmotivated. Some conscripts have been rounded up, dropped off at seemingly abandoned training centers, and left without guidance or gear. Some units don’t have enough water; some don’t have enough trenching equipment. Some units have been ordered (warned) to equip themselves with necessary protective gear and first-aid supplies. Many have been sent into battle on trucks that can’t move due to neglect or lack of fuel. Others have been forced to use 1960s-vintage tanks and rusted rifles. Even a pro-Putin Russian journalist concluded that Russian military units have been “abandoned without communication, without the necessary weapons, without medicines, without the support of artillery.”

Understandably, some of the men fighting Putin’s war are terrified; others are traumatized by what Putin has done and ordered them to do. “They simply decided to shower Ukraine with our corpses in this war,” explains Russian paratrooper Pavel Filatyev, who is now living in exile. “I survived, unlike many others. My conscience tells me that I must try to stop this madness … We did not have the moral right to attack another country … The majority in the army, they are dissatisfied with what is happening there, they are dissatisfied with the government and their command, they are dissatisfied with Putin and his policies.”

In a sign of Ukraine’s humanity and Putin’s cruelty, Ukrainians have set up hotlines to help Russians find out if their loved ones deployed to Ukraine are dead or captured – even as Putin’s henchmen have set up firing lines to prevent conscripts from retreating.

In light of all that – the mental trauma, inadequate training, dilapidated equipment, staggering casualties and terrible leadership – some Russian soldiers are finding a way to avoid the front. Some simply refuse to deploy or redeploy. Some are purposely shooting themselves to be removed from the war zone. Some units have killed their own commanding officers. Some conscripts have attacked recruiting centers; others have turned basic training into fratricidal massacres. Some Russian regiments have rioted or mutinied.

Now, compare the reactions of Russians being coerced into a war of aggression with the reactions of Ukrainians. In the former, those who have the means are fleeing, and those without the means are hiding, shooting themselves to avoid combat, refusing to fight, and killing their commanding officers. In the latter, a people’s army of shopkeepers and artists, young women and old men, students and soldiers, farmers and techies are rushing to the fight, picking up weapons, and crafting their own makeshift weapons to defend their country and cause. From Kiev during those crucial first days of the war, to Kharkiv this past summer, to Kherson today and into Crimea tomorrow, they are winning the war Putin began.

On the ground, against all odds, Ukraine’s army of citizen soldiers blunted and then reversed Russia’s assault. They are holding Kiev and Odessa, liberating the east, and striking deep into Russian-occupied Ukraine. They have reclaimed 46,256 square miles of their land – thanks to a steady stream of weapons from the United States and other NATO nations, as well as their own creativity.

Ukrainians, for example, have developed a smartphone application that enables ground troops to order an artillery strike just like a civilian would order an Uber. “All you have to do is enter the GPS coordinates of the target. The available (artillery) fire in the vicinity is displayed, and all you need to do is order the shot,” a French military official tells Le Monde. The paper reports, “The process has reduced reaction time to one minute, whereas it can take modern armies 30 minutes or longer to obtain support.” Military analysts call Ukraine’s artillery app “the most efficient and effective firing command system currently on the market.”

Another example of the Ukrainian people’s creativity and commitment on the ground – literally at the grassroots. The Ukrainian Volunteer Service (UVS) matches Ukrainians unable to go the frontlines with opportunities to help the war effort. As The Atlantic reports, by connecting to UVS through Instagram, Facebook, Telegram or TikTok, Ukrainians can learn how to make Molotov cocktails, volunteer to pack and distribute food to war refugees, clean up after Russian bombing raids, produce camouflage covering for snipers, rebuild razed houses, harvest crops for farmers deployed at the front and transport refugees.

In the skies, Ukraine has shot down 222 of 330 long-range Iranian-made suicide drones launched by Russia, according to The Wall Street Journal, along with scores of Russian missiles. Defense analyst Sebastien Roblin reports that Ukraine’s crafty defenders have used a mix antiaircraft cannons, heavy machine guns, U.S. and British shoulder-fired missiles, and Russian antiaircraft and anti-missile systems to knock out Russia’s Iranian-made kamikaze drones.

Ukraine is using the skies for offensive operations as well. For instance, the Ukrainians have refashioned their U.S.-supplied air-to-ground anti-radiation missiles to deploy from Russian-built MiG-29s – something that’s never been done. "You can't just hang any kind of rocket off of any kind of plane – there's a whole lot of avionics and other aspects of flying and high-performance aircraft that are involved here," Gen. Frederick Hodges, former commander of U.S. Army Europe, told The New York Times. "And they did it." Technological feats like this have led military experts to use “the MacGyver metaphor,” Hodges adds, to describe Ukraine’s clever warriors.

Then there’s Ukraine’s fleet of unmanned assets. Aerorozvidka is a volunteer drone unit founded by Ukrainian techies that builds and deploys customized killer drones. Aerorozvidka played a key role delaying and then stopping the 40-mile-long Russian column that queued up on the approaches to Kiev early in the war. And Aerorozvidka units continue to surveil and strike Russian formations. Lauren Kahn of the Council on Foreign Relations adds that ordinary Ukrainians “have used 3D printers and cheap fragmentation grenades to turn toy drones … into a platform for carrying out stealthy, short-range precision attacks.”

On the seas, a country essentially with no navy has retrofitted jet skis and Sea-Doos into unmanned water-borne kamikaze drones, which have been used to great effect against Russia’s navy. The late-October attack on Russian naval assets based in Sevastopol, for instance, disabled three warships, including Admiral Makarov (newest flagship of Russia’s Black Sea Fleet). The operation made military history, the Ukrainian government boasts, as the first naval attack carried out entirely by unmanned systems. The sinking of Moskva, first flagship of Russia’s Black Sea Fleet, came courtesy of a modified Soviet-era missile that the Ukrainians mounted onto the bed of a truck. As The New York Times details, Ukraine’s crafty troops have strapped rockets onto speedboats to target Russian assets. Ukraine’s maritime maneuvers have effectively forced Russian vessels to remain tethered in port.

Ukraine is getting lots of assistance from the United States, Britain, Europe, Turkey and Australia. And we cannot overstate the importance of the training and tactics Ukraine’s military has learned from U.S. troops and other NATO militaries since 2014. But even a massive arsenal of high-tech weapons is of little use in the hands of an unmotivated, uncommitted, undisciplined force. Just compare Russia’s invaders with Ukraine’s defenders.

“In war,” as Napoleon observed, “three-quarters turns on personal character and relations; the balance of manpower and materials counts only for the remaining quarter.”