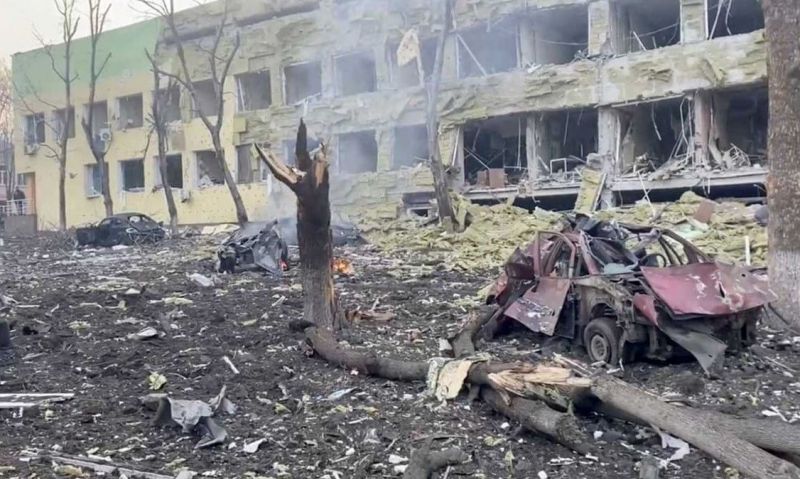 A children's hospital in Mariupol after a Russian airstrike

“Democracy's fight against world conquest is being greatly aided, and must be more greatly aided, by the rearmament of the United States and by sending every ounce and every ton of munitions and supplies that we can possibly spare to help the defenders who are in the frontlines,” President Franklin Roosevelt intoned as tyrant regimes descended on democracies across Asia and Europe. Our enemies “must be out-fought and out-produced,” he said, adding, “We must be the great arsenal of democracy.”

Eight decades later, the valiant Ukrainian people are doing the fighting, while America and its allies are producing the weapons needed to defend the frontlines of freedom.

America’s arsenal Defense Secretary Lloyd Austin cogently explains why America and its free-world allies have reopened their arsenals to support Ukraine. “Putin's war of choice is a direct threat to European security … Russian aggression is a clear challenge to our NATO allies … Russia's deliberate cruelty is an attack on our shared values … And finally, Russia's invasion tears at the rules-based international order that keeps us all secure … Our support for Ukraine's self-defense is an investment in our own security and prosperity.”

The United States has poured some $20 billion in military assistance into Ukraine, with billions more pledged and in the pipeline. The growing list of U.S. military aid to Ukraine includes:

Patriot missile-defense batteries are on the way. Recently-retired M1A1 tanks may soon be added to the list, according to Pentagon officials. And there’s more to come. The White House has requested $38 billion in fresh appropriations for Ukraine, which would raise the total amount appropriated (not spent) for Ukraine above $100 billion.

U.S. assistance is not limited to weapons systems. The United States has shared vast amounts of intelligence with Kiev and conducted high-level joint wargaming to steer Ukraine’s tactics and maximize Ukraine’s resources. Plans are in motion to train thousands of Ukrainian combat troops at facilities in Germany -- an extension of training programs launched after Russia’s initial invasion of Ukraine in 2014.

Allied arsenals America is not alone in this effort. Some 50 nations are sending aid to Ukraine and helping defend democracy.

Ukraine has received more than 1,200 AFVs and APCs from the Czech Republic, Poland, Slovenia, Greece, Canada and Spain.

NATO has engineered delivery of more than a squadron of Su-25 fighter-jets.

Norway, Germany, Denmark and Slovakia are pooling their resources to deliver Slovak-built howitzers, and Slovakia is transferring a squadron of MiG-29 fighter-bombers to Ukraine.

In addition, the EU is finalizing plans to transfer $1.5 billion in economic aid to Kiev per month to sustain Ukrainian government services throughout 2023.

Australia has sent radar systems, mine-resistant trucks and hundreds of kamikaze ground-attack drones to Ukraine, and Australian troops have deployed to Europe to train Ukrainian soldiers.

Russia has even been kind enough to provide Ukraine with arms to defend itself. Abandoned Russian equipment – including 460 main battle tanks, 92 self-propelled howitzers, 448 AFVs, 195 APCs, 44 rocket-launch systems – has doubled Ukraine’s combat capability. These captured Russian weapons make Moscow “the largest supplier of heavy weapons for Ukraine, well ahead of the U.S. or other allies in sheer numbers,” The Wall Street Journal reports.

To coordinate the massive amounts of military assistance flowing into Ukraine, the Pentagon has stood up the Security Assistance Group Ukraine, which is led by a three-star general based in Germany.

Countering those who say the free world is spending too much to help Ukraine, NATO secretary general Jens Stoltenberg soberly explains, “We are all paying a price for Russia’s war against Ukraine. But the price we pay is in money, while the price Ukrainians pay is in blood. And if we let Putin win, all of us will pay a much higher price.”

Reloading “Freedom must be armed better than tyranny,” President Volodymyr Zelensky of Ukraine has observed. That’s true not only for frontline democracies like Ukraine, but also for the rest of the free world, which underscores the urgent challenge of replenishing the arsenals of democracy. NATO militaries, weapons manufacturers and supply chains – unaccustomed to the burn rate of high-intensity combat between two modern near-peer militaries – are scrambling to restock their inventories and maintain their own deterrent capabilities.

Indeed, Washington must ensure, first and foremost, that America’s arsenal has the weapons needed to defend America's democracy and deter America’s enemies – which brings us back to another line from FDR’s “Arsenal of Democracy” address: “the rearmament of the United States.”

With an $857 billion defense budget planned for 2023, it might look like America is well-armed and fully funding its military. But looks can be deceiving. The Army is undersized and overstretched. The Navy is far too small. The Air Force fleet is undermanned, undersized and old. The main reason: The United States invests a little over 3% of GDP in defense. America’s Cold War average was more than twice that.

With Russia on the march, China on the rise, the Middle East on fire, and Russian ASATs, Chinese fighter-bombers, North Korean missiles and Iranian drones setting the free world on edge, a strong argument can be made – and many have – that a new cold war is upon us. To prevent Cold War 2.0 from metastasizing into something far worse, larger and more sustained investments in defense are needed. Former national security adviser Gen. H.R. McMaster suggests 4.5% of GDP for defense. A panel of military experts calls for increases to the defense budget of 3% to 5% above inflation.

Spurred by the assault on Ukraine, congressional leaders are hammering out plans for a new weapons-acquisition fund, multi-year contracting to incentivize arms manufacturers and reforms that will enable the Pentagon to collaborate with NATO partners to procure weapons in large quantities. In addition, Congress is earmarking $8 billion for munitions production – on top of $600 million already authorized to backfill U.S. stocks of 155mm rounds. The Army has awarded LockheedMartin $520.8 million to replenish its inventory of Guided Missile Launch Rocket Systems. LockheedMartin has doubled production of Javelin antitank missiles and expanded production of HIMARS rocket launchers by 60%, The Wall Street Journal reports.

Likewise, NATO members are streamlining purchasing cooperation and mitigating supply-chain constraints. Nearly every NATO member is increasing defense spending. And some European arms manufacturers are even merging to boost production.

Good and bad The bad news is that Putin’s war on Ukraine appears far from over. Ukraine desperately needs more air-defense systems to protect its population centers from Russia’s indiscriminate attacks, more armor to liberate its territory, better aircraft to clear its skies.

The good news is that the arsenals of democracy won’t be shutting down anytime soon.

The better news is that, even as the arsenals of democracy help Ukraine defend itself, they are having an impact far beyond Ukraine.

“This war has imposed terrible costs on Ukraine,” Hal Brands of the Johns Hopkins School of Advanced International Studies concedes. Yet the war “has been a strategic windfall for Washington. Russia’s military is being reduced to rubble. The North Atlantic Treaty Organization is expanding and strengthening its defenses. China is facing greater resistance in the Western Pacific as Japan, Taiwan and Australia hasten their military preparations. European nations that now see the downsides of dependence on one coercive autocracy are reconsidering their ties with another: Beijing. Amid Putin’s serial struggles in Ukraine, assertive authoritarianism no longer looks like the wave of the future.”