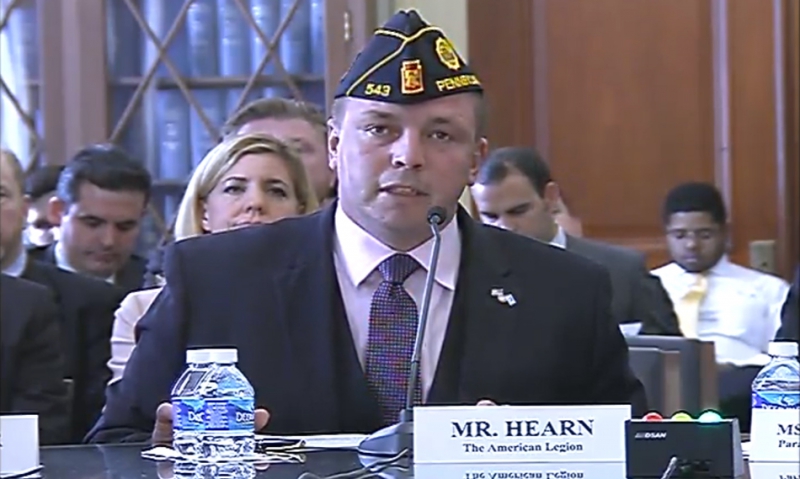 Zachary Hearn, deputy director of benefits for the Legion’s Veterans Affairs & Rehabilitation Division, amplified the Legion's views while testifying before the House Veterans Affairs Subcommittee on Disability Assistance and Memorial Affairs. The hearing focused on the Department of Veterans Affairs' appeals system for veterans’ claims.

Veterans who have appealed their disability claims wait an average of 1,937 days for final decisions, according to numbers listed in VA’s Monday Morning Workload Report of Jan. 5. That time span is about 500 days longer than a standard four-year enlistment in the military.

Hearn told the committee that nearly 75 percent of claims presented at Board of Veterans’ Appeals (BVA) have either been improperly denied at a VA regional office, or inadequately developed and denied prematurely. Many claims were also appealed because their claims adjudicators failed to follow their legally mandated duties to assist veterans.

In reviewing claims appeals, The American Legion often notes that VA claims adjudicators do not consider secondary medical conditions that have been caused or aggravated by previous service-connected conditions. If VA workers were compelled to consider those conditions, Hearn said, many remands for medical examinations would be eliminated. But such additional consideration is time-consuming.

“While VA asserts it does not place a higher priority on the amount of claims adjudicated,” Hearn said, “its current work-credit structure does not address accuracy in its metric, which rewards speed over quality.”

The American Legion represented more than 9,100 veterans at the BVA between October 2013 and last September. About three-fourths of those claims were either granted outright to the veteran (28.1 percent) or sent back to regional offices because of improper work (46.4 percent).

Once a BVA judge remands a claim, instructions are forwarded to VA’s Appeals Management Center for further development. Hearn said these remands, or returned claims, come with clear and distinct instructions from the judges, yet The American Legion consistently sees cases remanded multiple times, despite the instructions.

“This is what is known as the ‘hamster wheel’ of remands, where a veteran remains in adjudication purgatory, waiting for VA to conduct proper development and finally render a decision," Hearn said. "The greatest impact on the appeals process would be eliminating the need to appeal in the first place.”

“This is what veterans face: An adjudication process that rewards the quick and not the accurate, an appellate process that repeatedly notes errors in development, and adjudication that may cause years of hardship for our nation’s veterans," Hearn said.

VA needs to eliminate its current work-credit structure, Hearn said, because it places greater emphasis on the quantity of claims adjudicated, rather than the quality of those adjudications.