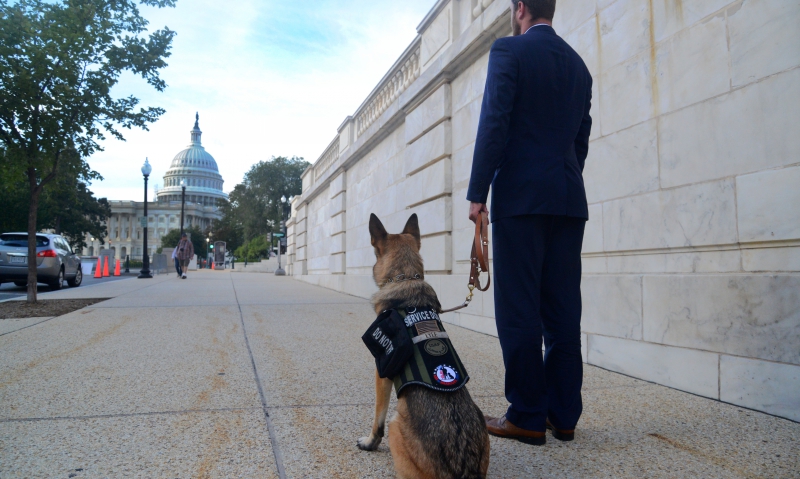 Marine Corps veteran Cole Lyle channeled the inspiration he felt for the brothers and sisters in arms he served with during a deployment to Afghanistan in 2011. While in country, Lyle dedicated the sparse free time he had volunteering at Camp Bastion Field Hospital and Medical Treatment Facility’s Trauma Clinic, which was understaffed at the time.

Little did the Marine know, what he witnessed there would be inextricably linked to his life – even after his separation from the military.

Lyle returned to the states after his deployment and found himself diagnosed with post-traumatic stress disorder (PTSD) during a post-deployment health assessment. He sought help for his PTSD from the Department of Veterans Affairs. To supplement the concoction of prescribed sleep aids and anti-depressants prescribed to treat his symptoms, Lyle also sought counseling at VA Vet Centers.

None of that could stop his world from spiraling downward. Lyle left the Marine Corps in 2014, simultaneously juggling a divorce while additionally experiencing unemployment. “Intra-personal relationships were harder to maintain than necessary, along with not having the familiar support system of my fellow Marines and the chain of command,” he said. “In the same few months, I would experience what most veterans now are all too familiar with: the loss of military friends to preventable suicide.”

That series of events prompted Lyle to take matters into his own hands.

“Life as I’d known it had been ripped away, and one night alone, I decided to end it all," Lyle said during his testimony on personal experiences with PTSD, at a hearing with the House Committee on Oversight and Government Reform Subcommittee on National Security in April. "It is only for the timing of a friend, a fellow Marine, arriving on my doorstep at that exact moment that I’m here right now. Semper Fidelis, indeed,”

The next day, Lyle quit his medications cold turkey. The Marine decided to try a different approach to combat the unwavering residual effects of his PTSD. After spending months on waiting lists to obtain a service dog through various charities, Lyle purchased a German Shepard named Kaya using more than $10,000 of his own money and with the help of his family.

“I found out that service dogs were an option, but they were not provided by the VA,” Lyle said. “I went to the non-profit organizations leading the charge on this issue, but they had long wait times due to their constrained budgets and the high demand. I was incredulous that the VA did not provide dogs. It seems like a very obvious solution.”

Through Assistance Dogs International, Lyle trained Kaya to help him deal with his nightmares and anxiety attacks. Lyle says her presence and assistance helps reduce many of his symptoms. “In a very intangible way, dogs provide a sense of purpose that medications can’t," he said. "They give us a reason to wake up in the morning."

Lyle rappelled into the political arena as a lobbyist after a trip to the nation’s capital. While walking around D.C., a senator stopped Lyle, inquiring about the circumstances that led him to use a service dog. “Everywhere I go, people always ask me why I have a service dog, because I don’t have an injury that they can see,” Lyle said. “The senator said he didn’t think that it was right that the VA doesn’t provide service animals. He called me to his office, and we talked about it for a few minutes.”

The senator urged Lyle to write out a detailed plan that included the importance of how service dogs positively impact veterans and reforms he would like to see made.

Lyle took the senator’s words to heart, drafting what is now known as the Puppies Assisting Wounded Servicemembers (PAWS) Act. Introduced in the House March 16, and passed on to the House Committee on Veterans' Affairs, the proposed legislation would create a five-year, $10-million pilot program mandating the VA to pair veterans suffering from PTSD with service dogs.

“The goal is not to replace pills or therapy with dogs," Lyle said. "Those things work for some people. Give veterans other options if those two don’t work for them.

"I would like to see this legislation benefit veterans from past and current conflicts in order to benefit those that might serve in future wars. I would hate to see future veterans struggle from the same issues as those who served in the past.”

Currently, the House bill sponsored by Rep. Ron DeSantis (R-Fla.) has 124 cosponsors. The Senate version was recently introduced by Sen. Deb Fischer (R-Neb.) and was also referred to the Committee on Veterans Affairs.

A number of notable government officials support the proposed legislation including Tulsi Gabbard (D-Hawaii), Marco Rubio (R-Fla.) and Tim Kaine (D-Va.). “This bill has a wide swath of support in the Senate and House,” Lyle said. “This proposed piece of legislation is great because it provides options for those who have already tried evidence-based treatments and have not seen success.”

At the American Legion’s 98th Convention in Cincinnati, a resolution was passed urging the VA to clearly define regulations and current eligibility requirements for a veteran to receive a referral to agencies providing service dogs for mental and/or physical conditions until Congress passes legislation mandating VA to provide service animals for eligible veterans.

With a glimmer of hope in his eyes, Lyle said he hopes the legislation will be passed soon and bring a sense of relief to veterans struggling to cope with everyday life. “Service dogs provide a positive avenue to regain a small sense of purpose so veterans can get out of post-traumatic stress and into post-traumatic growth," he said.