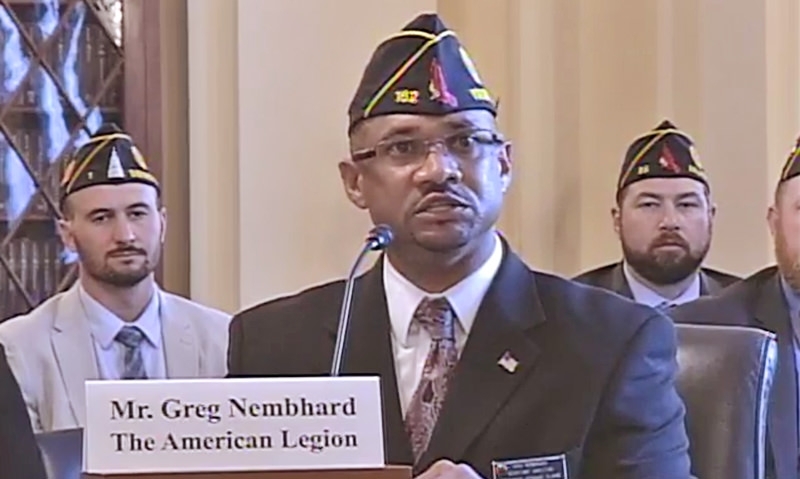 Assistant Director for Discharge Upgrade Claims in the Veterans Affairs and Rehabilitation Division for The American Legion, Greg Nembhard, testified Sept. 5 before the Subcommittee on Disability Assistance and Memorial Affairs on protecting honorable burials, family members and benefits earned by veterans.

The Fallen Warrior Battlefield Cross Memorial is comprised of a helmet, inverted rifle, boots, and dog tags. Currently, the law authorized cemeteries to display the Fallen Warrior Battlefield Cross. However, new guidance from the Department of Veterans Affairs (VA) and National Cemetery Administration (NCA) has led to the removal of memorials featuring actual or realistic replicas of weapons, which has resulted in the removal of some monuments.

“The American Legion seeks to protect these sacred symbols and supports legislation preventing the removal of battlefield crosses in national cemeteries,” said Nembhard.

Through American Legion Resolution No. 11: Support and Defend Veteran and Military Memorials, the Legion supports and defends veteran and military memorials displaying symbols and wording historically associated with religious expression.

H.R. 6409, the Honoring Veterans’ Families Act, will authorize the Secretary to provide inscription for spouses and children on certain headstones and markers furnished by the Department of Veterans Affairs.

“Current law does not allow the VA to add information about spouses and/or children to the gravestone or marker of a veteran buried with a government-furnished headstone or marker in a non-VA cemetery,” Nembhard said. “This practical legislation ensures these family members receive the same honor customarily practiced in modern society.”

The Honoring Veterans’ Families Act will modify current law by allowing VA to add inscriptions on a veteran’s headstone or marker for their spouse and children. The Legion supports this act through American Legion Resolution No. 377: Support for Veterans Quality of Life.

“The research illuminates the life of those buried in NCA cemeteries, honoring their contributions to the country and their communities,” Nembhard testified. “VLP makes information available to the public through informative materials such as interactive maps to educate visitors.

“We support legislation aimed at ensuring the stories of veterans are never forgotten, and the Veterans Legacy Program is a great step forward in that initiative,” he concluded.