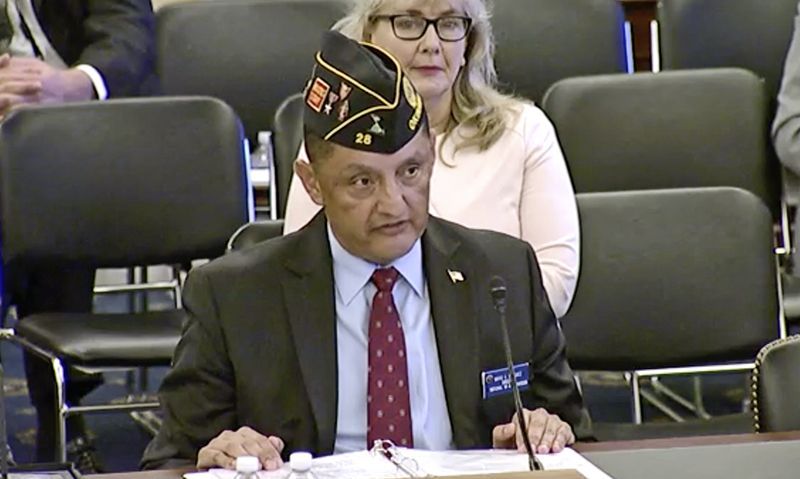 American Legion Director of Veterans Affairs & Rehabilitation, Mario Marquez, testified on June 23 before the Senate Committee on Veterans’ Affairs (SVAC) regarding the organization’s position on pending and draft health-care bills.

In 2020, The American Legion joined forces with a bipartisan group of senators in an effort to pass legislation aimed at combatting veteran suicide. Senate bill S.544 was reintroduced for the 17th Congress and reflects The American Legion’s “Buddy Check National Week of Calling” to connect veterans to better ensure that they receive the care they need.

The legislation will require the Department of Veterans Affairs (VA) to establish a “Buddy Check Week,” as well as provide educational opportunities, materials and references for veterans to learn how to conduct personal wellness checks. Additionally, the bill compels VA to expand resources for the Veterans Crisis Line to handle any potential increased usage during the designated week.

Dedicating a time and additional resources to encourage outreach and peer wellness checks by veterans is even more critical in the wake of the COVID-19 pandemic, as increased isolation has exacerbated mental issues both in and out of the veteran community.

“CDC statistics show that reports of anxiety and depression have tripled, and in some case quadrupled, since 2019,” Marquez told the committee.

The bill would require VA to collaborate with veterans service organizations and mental health experts to provide educational opportunities for veterans which includes a script on how to conduct a buddy check and training on how to transfer a call directed to the Veterans Crisis Line.

“A VA-run National ‘Buddy Check Week’ will reach, support and aid significantly more veterans than The American Legion would otherwise be able to do on its own. Getting this bill signed into law remains one of our top legislative priorities,” Marquez added.

The American Legion supports S.544 through Resolution No. 18: Buddy Check.

“Veterans need outreach in a lot of different ways,” said Sen. Maggie Hassan, D-N.H., who worked with Sen. Joni Ernst, R-Iowa, to introduce the legislation. “The American Legion’s Buddy Check Week volunteer initiative is important because it connects veterans directly with other veterans. I introduced bipartisan legislation with Sen. Ernst to build on The American Legion’s efforts by directing the VA to designate one week per year as Buddy Check Week to organize outreach to veterans to educate veterans on how to conduct peer wellness checks.”

Hassan was appointed at the beginning of the 117th Congress to the SVAC and has already proven to be a passionate ally for the veterans. She has led the fight with Ernst in ushering S.544 through the legislative process and has demonstrated a commitment to addressing the mental health needs of veterans not only by supporting S.544; but also in sponsoring S.1198 the Solid Start Act. This complementary piece of legislation to S.544 would make Solid Start Program — which does outreach to newly separated veterans — permanent.

Hassan asked Marquez to speak to how the Buddy Check Week initiative and having a specific week will help veterans and how we can reach more veterans through VA.

“The Buddy Check bill is complimentary to everything VA already does,” said Marquez. “We are able to count the number of suicides. But what we cannot count … is the number of lives we’ve saved. That is the measure we need to achieve.”

Hassan added that by focusing on a particular week, it increases outreach at a critical time. She thanked The American Legion for taking the lead in this effort.

Honoring our greatest generation is of “urgent significance,” Marquez told the committee. Only a fraction of the 16 million Americans who served in World War II are still alive. The approximately 325,000 who remain face a significant hurdle when seeking care through VA.

S.1040 would extend automatic eligibility to all World War II veterans. With nearly 300 of these veterans passing away every day, there is no more time to wait, Marquez added.

“It is unacceptable that some veterans of our greatest generation do not have access to benefits they earned due to restrictions in eligibility for VA health care. This legislation is vital to for the welfare of our World War II veterans, and we stand ready to assist Secretary (Denis) McDonough in doing what is best for America’s veterans.”

Sen. Jerry Moran, R-Kan., thanked The American Legion for its strong support on the Cmdr. John Scott Hannon Veterans Mental Health Care Improvement Act. Signed into law last year, the legislation is a comprehensive approach to connecting veterans to mental health services. Moran asked Marquez to speak on the importance of peer-to-peer support and how increased support can help veterans stay on the road to recovery.

“The American Legion believes that a peer support approach to mental health and suicide prevention is instrumental to anything we do when it comes to our efforts,” Marquez said. “Something I learned in the military as a sergeant major, was that it was devastating every time I lost a Marine. It was even more difficult with the veterans who had just gotten out and I felt helpless trying to reach and assist them.”

Sen. Tommy Tuberville, R-Ala., noted The American Legion’s support for S.613 – PAWS for Veterans Therapy Act due to it allowing for an alternative form of treatment for veterans suffering from post-traumatic stress disorder (PTSD) and traumatic brain injuries (TBI).

“I believe it’s incumbent upon us to make available every treatment option for veterans available,” Tuberville said. He introduced legislation that would provide veterans struggling with TBI and PTSD access to hyperbaric oxygen therapy.

With The American Legion’s commitment to supporting alternative and non-invasive therapies, Tuberville asked for support in reviewing and working with his staff on a way forward to support the bill.