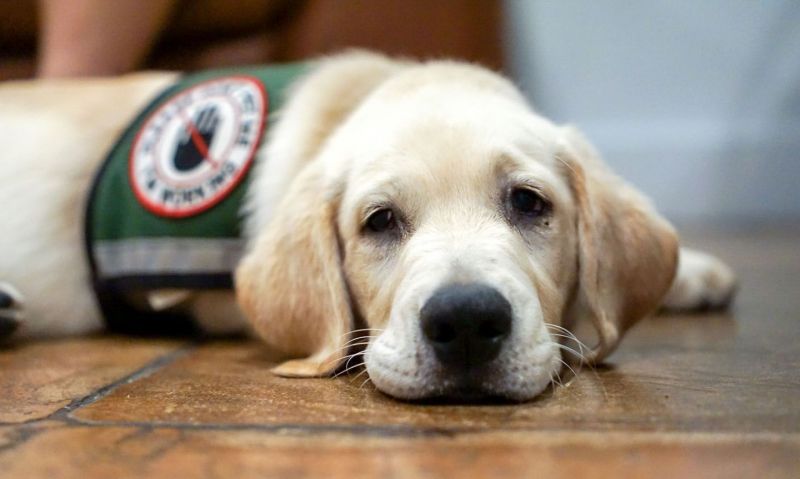 The Puppies Assisting Wounded Servicemembers (PAWS) for Veterans Therapy Act has been passed by both chambers of Congress and will head to the president’s desk to be signed into law. The American Legion-backed PAWS for Veterans Therapy Act allows the Department of Veterans Affairs (VA) to connect service dogs with veterans dealing with post-deployment mental health needs by awarding grants to nonprofit organizations that would provide veterans with puppies to become therapeutic service dogs, as well as cover the cost of training the puppies.

Additionally, the bill will amend title 38, United States Code, and authorize the Secretary of VA to provide service dogs to veterans with mental illnesses who do not have mobility impairments. The American Legion testified in support of a previous version of this bill in 2017.

“Service dogs can act as an effective complementary therapy treatment component, especially for those veterans who suffer on a daily basis from the physical and psychological wounds of war,” wrote The American Legion.

“Today is a win for our nation’s veterans who live with post-deployment mental health conditions. I have made it a priority since being elected to the Senate to do everything possible to combat veteran suicide, and this legislation adds another tool in the toolbox for our men and women who served,” said Tillis. “I am proud we could get this bipartisan legislation across the finish line, and I want to thank former Rep. (Steve) Stivers and my colleagues in Congress for passing this legislation that will enable dog training therapy for our veterans.”

The American Legion supports the PAWS for Veterans Therapy Act through Resolution No. 134: Service Dogs for Injured Service Personnel and Veterans with Mental Health Conditions and Resolution No. 160: Complementary and Alternative Medicine.