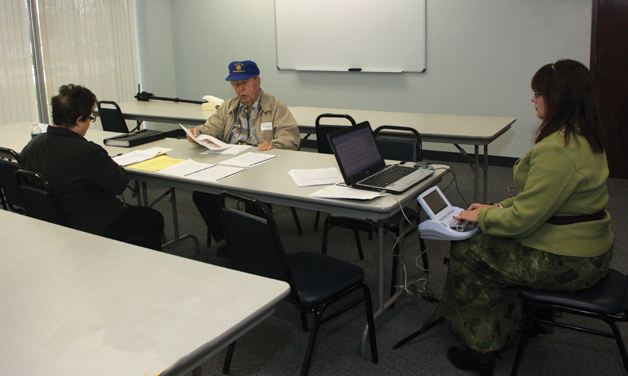 Francis Dawson has told his story before, but he says he’ll keep sharing it to make sure what he saw during World War II isn’t forgotten.

Dawson served with the Army’s 2894th Engineer Technical Intelligence Team, disarming weapons and explosives. In 1945, he and his team were sent to check out a recently liberated concentration camp in southern Germany. Though small, it housed underground munitions factories where prisoners made bombs and rockets for the German military. Production had stopped some time before – “when the fuel went out, it went down,” Dawson says – but he was careful to document the camp’s atrocities in photographs.

A 50-year Legionnaire, Dawson sat down with a group of veterans last fall to recount his wartime experiences for court-reporting students at Prince Institute’s Schaumburg, Ill., campus, as part of the Library of Congress’ ongoing Veterans History Project (VHP). His story joins thousands more in an archive of personal war histories like no other.

The American Legion is a strong supporter of the VHP, which Congress authorized in 2000. U.S. Rep. Ron Kind, D-Wis., introduced legislation to create the project, and when audiotapes began pouring in, his wife, Tawni – a court reporter in Wisconsin – realized how valuable transcription could be to the effort. She encour aged the National Court Reporters Association (NCRA) and the National Court Reporters Foundation (NCRF) to get involved, and in 2003 the organizations became founding partners of the Veterans History Project. To date, court reporters and court-reporting students have transcribed about 2,400 oral histories, volunteering a service that can cost anywhere from $50 to $100 an hour.

Overseen by the Library of Congress’ American Folklife Center, the VHP accepts everything from scrapbooks to letters to photographs, but its focus is collecting veterans’ oral histories in audio and video recordings. Bob Patrick, VHP’s director, says the project’s mission is to “tell the story of war from the bottom up,” from those who actually lived it. The collection currently has 78,000 firsthand accounts, with roughly 100 submitted every week.

“A lot of the stories of Vietnam have not been told,” says Patrick, who as an Army veteran has been both interviewer and interviewee. Many veterans find telling their stories to be a release, and some end up sharing experiences they never talked about with their families, he says.

The NCRF works with court-reporting schools nationwide to host VHP Day on Campus, urging them to invite local veterans to visit and tell their stories.

The NCRF’s commitment to the VHP is long-term, Kilker says. “As long as there are veterans willing to tell their stories, the NCRF will be there.”

Dave Wynne, Prince Institute’s senior vice president for sales and education, says 2011 was the Schaumburg campus’ first year to put on a VHP day for veterans. Participation at other Prince campuses in Westminster, Colo., and Montgomery, Ala., “has grown pretty dramatically as people have heard about them.”

Though Prince recruits VHP transcribers among its students, teachers and staff, many are eager to do interviews themselves, and local veterans help by spreading the word about the project. Wynne remembers a Marine Corps veteran who shared his story, and the next year brought 15 others with him to do the same. Nearly half of the World War II and Korean War veterans he’s met wore their uniforms to their interviews.

Myrna Alexander, who interviewed Dawson, considers the VHP invaluable. “Recording their stories tells them that what they did will always be remembered by future generations,” she says. Court reporter Margie Kruse, who transcribed the interview, agreed. On her blog, Kruse described her time with Dawson as “one of the single most gratifying experiences of my entire career. We all need heroes, and you are mine, Frank!”

Dawson’s VHP interview at Prince wasn’t the first time he’s had his story recorded for posterity; he’s also been interviewed by the Illinois Holocaust Museum & Education Center, to which he donated the valuable photographs he took at the German concentration camp. When he saw a notice about the Prince event in his retirement community’s newsletter, he thought, “Well, I’ll give it one more try.”

Dawson’s determination to tell his story isn’t for his own sake. It’s to correct, forever, anyone who would deny the Holocaust happened, he says. “I can refute it, because I was there. I saw the bodies. I saw the camp.”

Laura Edwards is associate editor for The American Legion Magazine.