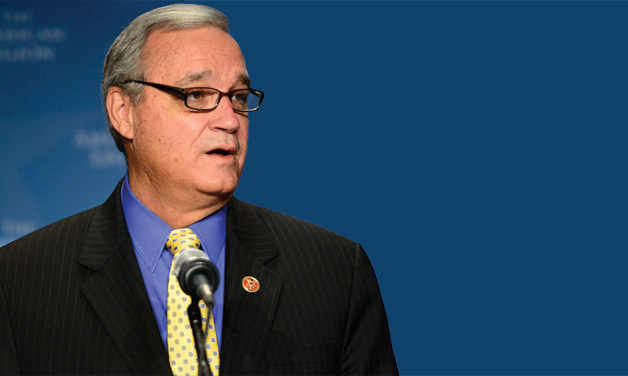 Rep. Jeff Miller, R-Fla., has begun to regard VA’s explanations about its growing backlog of undecided disability claims not so much as explanations but as excuses. He is also irritated that VA has not been able to significantly reduce veteran suicides, despite increased funding and attention to mental health care as more than 25 percent of combat veterans serving in Iraq and Afghanistan come home diagnosed with post-traumatic stress disorder.

The claims backlog and mental health have topped the agenda of the House Committee on Veterans’ Affairs chairman through the first six months of the 113th Congress. And neither issue is close to being scratched off his list.

Nearly 1 million VA benefits claims are now caught in the backlog – undecided 125 days or more after application. The average waiting time is approximately 270 days. Some cases take a year or longer.

Miller also wants to know why a 40 percent increase in staffing for VA mental health care has merely stopped the veteran suicide rate from increasing. “While the number of veterans seeking VA mental health has most certainly grown over the last decade, one number has stayed constant during that time: veteran suicides,” Miller told attendees of the 53rd American Legion Washington Conference in late February. “Any time a veteran who fought our enemies abroad and helped defend America from within our borders dies from their own hand, it’s completely unacceptable. It’s not enough that the veteran suicide problem isn’t getting any worse. It isn’t getting any better.”
To resolve VA’s difficulties keeping up with growing demand for services – whether timely adjudication of claims or the availability of mental health care – “it’s going to take a collective effort,” he said at the conference.

The VA claims backlog has been a problem for years. Why is it getting so much attention now?
America wants to see the issue resolved. It is becoming an extremely hot topic in all media outlets because people don’t understand why the backlog is as big as it is.

Some veterans suspect that the backlog is a deliberate effort to control federal costs. Can you see their point?
It is very easy to see how a veteran who is sick, has earned a disability but has to wait years to receive it, can feel – like they are being slow-walked to a decision. I don’t think that’s the case, but I certainly can understand how someone can feel that way.

What is the primary problem?
If you go back to 1997, you had one caseworker who was handling (something like) 138 cases. Today you’ve got three times the number of people handling half the cases. That makes no sense in anybody’s calculation. Granted, there are more complex claims coming in. But VA knows they are more complex. If I hear one more time that the backlog is because of the Nehmer claims (cases eligible for retroactive compensation due to the recent acceptance of new diseases and conditions as linked to Agent Orange exposure), I’m going to go to the top of the Capitol and scream. They knew this was going to bring additional work into the system. They didn’t plan for it. How can you not understand that there’s going to be an immediate rush for claims from a group of veterans who you know is going to be making a claim? And then not plan ahead for the returning OIF/OEF community as well?

Wasn’t the plan to separate the new Agent Orange claims and fast-track them?
They separated them OK. They started pushing everything to the side and started taking the (new Agent Orange) claims. I feel very certain that’s what they’ve done.
And now the new excuse is the IDES (Integrated Disability Evaluation System, a largely paper-based process). I was in Baltimore and I asked, “What is the problem?”
“Well, we’ve got this IDES system, and that has really caused a backlog.”
Look, it’s been several years – five, six years – and you’re still blaming that? What’s the next excuse going to be? America is tired of excuses for this ever-increasing backlog that is not serving the veterans community.

What is going to solve the problem?
It’s the people. It’s still the people who are going to solve the problem. Not a program. It is individuals who understand their job and execute it in a timely and appropriate fashion, and have an attitude that they really want to help.
We have 300,000 employees in the Department of Veterans Affairs. The vast majority of them are hard-working individuals who are there for the right reasons. We’ve got some people in VA who need to go someplace else. That’s from the highest levels of leadership all the way to the people in the mail room who are inputting documents. If they can’t see why they are part of the problem, then they need to move out of VA. Not the typical VA (approach of) “We’ll move you to some other position,” which is what VA does all the time.

Some VA regional offices around the country operate very efficiently and seem to stay on top of the claims applications they receive. Why are there such differences, one area to the next?
There is a culture within the system: individuals will outwait those who have oversight authority, whether it is leadership in the (VA) central office or oversight from Congress.
A rater at Togus (Maine) should rate the same way somebody rates in Baltimore. That’s not happening. You should be able to pick any single person up out of a claims office and move them all the way across the country and plug them right in. They should be able to pick up a file and rate that claim, and it should be the same way on either end of the country. And it’s not right now.

Can Congress and VA work together on this?
No matter how long someone is in a position, we all ought to work together. That’s why I have pledged to work with the secretary to try to help him in any way we can. I and Mike Michaud, the ranking member (D-Maine, House Committee on Veterans’ Affairs), are doing it in a bipartisan fashion. I have been very careful not to put this specifically on the desk of the secretary because I don’t believe he is fully informed by his team as to the severity of the problem.

Mental health has also been high on your agenda.
Twenty veterans a day commit suicide. That is not acceptable in any part of this world, let alone the United States of America.

But some measurable progress has been made, correct?
The last hearing we had on mental health, VA wanted to talk about how well things were going, and their comparative (analysis) was that the seriousness of the calls coming into the crisis lines was decreasing. While that may seem like a good metric for a bureaucrat, VA is assuming that all suicidal veterans are contacting their hotline. My concern is that they are not contacting the hotline, or they are contacting another hotline, or their church or somebody else.

What if VA simply cannot handle the volume?
VA has got to accept the fact that this issue is larger than they are. If a veteran cannot get timely access to mental health, we have to open the system up to allow them to go somewhere else. That’s only if they can’t get into the VA system ... I’m not trying to dismantle the VA system. I am trying to supplement their network of providers.
My fear is that some veteran is going to need help, and they’re going to be prevented from getting that help because of the bureaucracy. And they’re going to take their life. That is a stain on this country.

What kind of delays are veterans experiencing?
VA will tell you it’s 50 days (to get an evaluation). I would say that number is manipulated. I will say that if (veterans) call and express suicidal tendencies, they will get to see somebody. The person who suffers from depression hears, “We’ll get to you when we get to you.”

Are VA’s processes getting in the way of performance?
VA seems to be more concerned with checking boxes and systems than the number of veterans who are helped. Mental health is an immediate need. And the sheer aggravation of trying to get into the system is probably a trigger for some veterans in accelerating the severity.

You have proposed using TRICARE providers where needs are unmet.
For many years – this includes the veterans service organizations – they have been hesitant to embrace allowing veterans to go outside the system because there was a fear that it was a dismantling of VA. That is not anybody’s intention. I do think VA provides world-class health care. We are just trying to supplement, to catch as many veterans as possible, as quickly as possible, to allow them to get the care they need.