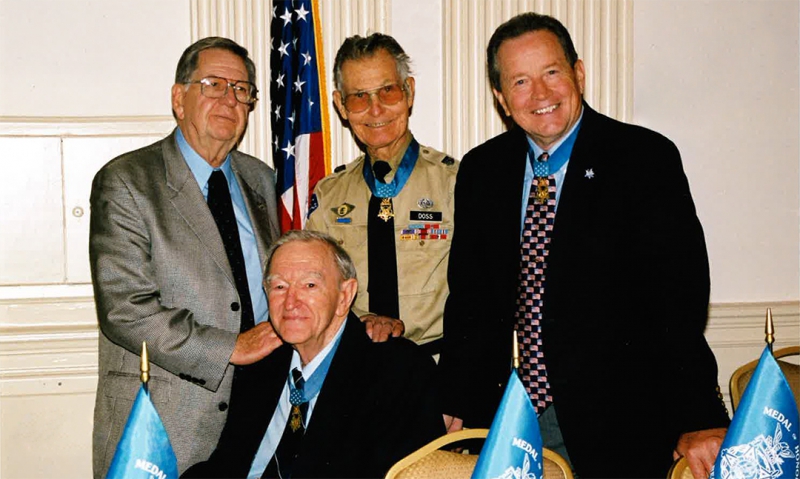 On Nov. 4, the biographical war film “Hacksaw Ridge” opened in U.S. theaters, bringing fresh attention to one of America’s most unique Medal of Honor recipients.

Directed by Mel Gibson, the movie tells the story of Desmond Doss, a self-proclaimed “conscientious cooperator” who refused to carry a rifle yet managed to rescue approximately 75 soldiers during the Battle of Okinawa.

“He was a great guy,” says Carl Levi, a retired brigadier general in the Tennessee Army National Guard and family friend of Doss. “About as big around as your finger, and he could still wear his khaki uniform. Everybody loved him.”

After the Japanese attacked Pearl Harbor, Doss volunteered for service, but his religious convictions prevented him from carrying a gun or killing anyone. Instead of taking a deferment, he registered as a conscientious objector – though he expressed that he was willing to go onto the battlefield, wear a uniform and salute the U.S. flag. He was assigned to serve as a company medic for the 307th Regiment, 77th Infantry Division.

At the Maeda Escarpment, known as “Hacksaw Ridge,” Doss was wounded in the legs by a grenade and shot in the arm by a sniper’s bullet. He later developed tuberculosis and lost one lung. When President Harry Truman awarded Doss the Medal of Honor on October 12, 1945, he said, “I’m proud of you. You really deserve this. I consider this a greater honor than being president.”

Doss, who died in 2006, was a member of Chattanooga American Legion Post 14 for more than 60 years. That’s where he first met Levi, a young Army veteran who studied at the University of Chattanooga and was commissioned as an officer. Their friendship spanned decades.

Levi spoke with The American Legion about his memories of Doss.

You’re a 62-year member of Post 14 in Chattanooga. How did you end up joining the Legion?

When I came back, I went to school on the GI Bill and played in a little dance band here at the college. One of the guys said, “Why don’t you join The American Legion? They have a drum and bugle corps.” I said, “Sure, I’d love to do that. I owe them for the GI Bill.” I’ve been the commander of our post for 25 years, and I serve on the National Finance Commission. The Legion’s been good to me. I enjoy it and I enjoy what I’m doing. I’ve made a lot of friends and acquaintances through the Legion.

One of them was Desmond Doss. Tell us about him.

I met Desmond in the mid-’50s. I joined Post 14 in 1954, and he was already a member then. Chattanooga has the second oldest Armed Forces Day parade in the United States, and our post was sponsoring a luncheon. Desmond was there, and we got to talking. After that we’d go different places together. I knew him and his first wife, Dorothy, who died, and Frances, his second wife.

I was county treasurer for a while, and Desmond used to come down to the courthouse to visit with me. He was a gentle individual, a devout Christian. He lived just across the line in Georgia, in a little place called Rising Fawn. After the war, he cashed in a life insurance policy and bought four or five acres. Desmond was not able to work because he wasn’t healthy enough, so he and Dorothy raised vegetables and sold them. In his last three years, I guess, he moved down to Piedmont, Ala., and that’s where he went to meet the Lord.

He lost his hearing because of too much antibiotics, so Frances would carry a pad, and when he would talk to you she’d write down what you said. Desmond would read it and answer back. He went out to Loma Linda, to an Adventist medical school out in northern California, and they put a device in so Desmond could hear a little bit.

He requested that at his death that I wear my dress blues, and I was honored to greet the crowd and present the flag to his son, Desmond Jr. He was buried at Chattanooga National Cemetery. The cemetery has seven Medal of Honor recipients, including four of the Andrews Raiders from the Civil War.

Why was the Legion important to Doss?

Being a Medal of Honor recipient, Desmond was awarded a lifetime membership. He never held an office, but he always said the Legion is good for veterans because it takes care of veterans, along with wives, widows and orphans. That was his nature. He believed in looking after and taking care of others.

Desmond was a devout Seventh-day Adventist, and there’s a very large community here in Collegedale, Tenn. I started an American Legion post up there several years ago, and after Desmond’s death they named it Desmond T. Doss American Legion Post 257. There’s a park there, too, with a life-size statue of Desmond.

Did he speak much about his war experiences?

No, he never did. Frances wrote a little book and he gave me a copy. When I was at the courthouse, he brought it down and autographed it for me. It was pretty much about his life but didn’t have a lot about his war service. He was a private person. He never talked about it.

I finally asked him, “Tell me a little bit about your life, Desmond.” He said, “My mother had a copy of the Ten Commandments, and when I was little I’d get on a chair and read it. When I left to go to the service, I remember looking at it again, and what stood out to me was, ‘Thou shalt not kill.’” He wouldn’t touch a rifle. His father was a veteran of World War I, and Desmond didn’t tell me this, but one day his father and his uncle got into an argument. They were drinking, and he had a pistol. His mother told Desmond, “Get this gun and hide it.” He said that’s the only time he ever touched a weapon.

How did Doss feel about the fame and respect that came with wearing the Medal of Honor?

Desmond never really talked much about himself. He might if you asked him a question, but other than that, no. Our post sponsored the Army Field Band in Collegedale one Sunday, and I asked Desmond to come up. We had 3,300 people attend that concert and Desmond was our showpiece. He would go around and meet people, and everybody wanted to meet him.

What is your opinion of “Hacksaw Ridge”?

They had a special showing here in Chattanooga and I thought it was a good movie. It shows how he met Dorothy, who was a nurse, and how they eventually married. When the war started, he said he had to join, but he didn’t like the term “conscientious objector.” He said, “I’m here not to take lives. I’m here to save lives.” It also shows how he was ridiculed when he went through basic training. Some of his fellows didn’t like him; they thought he was a coward. But after he saved 75 people on Hacksaw Ridge, everybody thought the world of him. In fact, he saved a lot of those who ridiculed him.

What would he think of the movie?

I think he would like the movie because it really doesn’t glorify war. It shows the human side of Desmond – how he saved lives and what he did. He could have picked up a rifle and killed several Japanese, but he didn’t.

Why is it important for his story to be told now?

A lot of people really don’t know what the military does and how important it is to protect this country, and how everybody can fit in. There’s a place for everybody in the military. Desmond was human. He wanted to save his fellow man and he wanted to obey God’s Word, and he had very strong beliefs. I think young people, if they see that, will realize not everybody in the military is a John Wayne. He was a conscientious objector and refused to handle a weapon, but he also wanted to be a part of the war effort to help save lives. That’s what he did.

Very highly. So is Charles Coolidge, our other Medal of Honor recipient. He got the Medal of Honor for his actions in France during World War II. He’s 95 and is a native of Signal Mountain, which is part of Hamilton County here in Chattanooga. I knew Charlie real well and still do. They were both friends, and we feel honored to have had both of them as members.