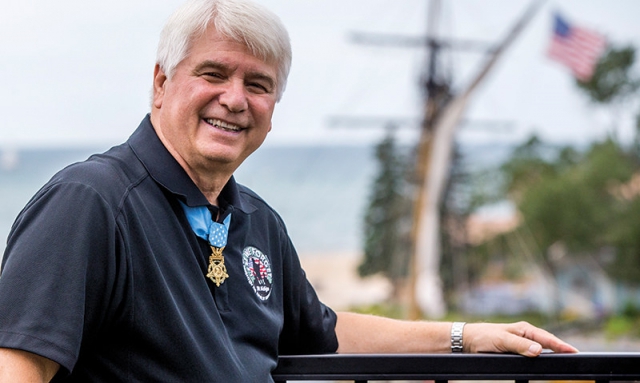 James McCloughan was wounded by the North Vietnam army early in a two-day battle near Tam Ky where U.S. forces were outnumbered 2,000 to 89. “I should have been killed or captured five times in that battle,” says the former Army medic.

After a helicopter crashed 100 meters from his position, McCloughan sprinted through heavy gunfire to rescue a severely wounded comrade and bring him to safety. As the enemy continued its assault, McCloughan rescued four other men in similar fashion. After reaching safety each time, he attended to their wounds and others in need of urgent medical care.

“A great burden was thrust upon me,” he says. He refused to be evacuated due to his own injuries. “I would rather be dead than hear that one of those men died in combat because they didn’t have a medic.”

For his actions in the May 13-15, 1969, battle, McCloughan received the Medal of Honor earlier this year. McCloughan, a 24-year member of American Legion Post 49 in South Haven, Mich., joins Korean War veteran Duane Dewey as post members who have received the award.

“I wear the medal for the 89 who went into this battle, whether they came out or not,” McCloughan says. “And, of course, my family and the extended members of my family.”

Among the soldiers he saved during the battle was Kent Nielsen. A machine gunner, Nielsen was shot in the right shoulder. The bullet missed the bone but tore apart the nerves, leaving his arm and shoulder useless.

McCloughan ran over to Nielsen, scooped him up – no easy task since they were about the same size – and carried him to safety, then began patching him up. “Without his assistance, I would have bled to death and wouldn’t be here today,” Nielsen says. “I owe him all kinds of debt and gratitude.”

When the two men reconnected 40 years after the battle, Nielsen learned that McCloughan continued his life of service.

“It’s hard to say anything other than he is a truly remarkable fellow,” Nielsen says. “He’s obviously heroic, but he also has a warm and generous heart. He really does look out for people. He has helped some other veterans with their PTSD issues. That’s Jim. That’s the kind of guy he is.”

McCloughan credits many people as early influences for his battlefield heroism, as well as the leadership he displayed after the war. “I had great parents, great mentors, great schoolmates, great teammates – great people who built my character into the person you see before you today.”

At Bangor High School in Bangor, Mich., McCloughan played four varsity sports, earning 11 letters. He later went on to Olivet College, where he competed in three sports, including wrestling, which he did not participate in during high school. “The first day when I walked in, I asked, ‘Where are the ropes? I’ve seen this on TV.’”

Not only did McCloughan learn the ropes of collegiate wrestling, but he ended up winning two conference titles. “Don’t tell me you can’t do something,” he says. “If you put your mind to it and use the skills God gave you, you can do it.”

What he learned on the mat and field gave him a mental toughness for when things went sour in combat. “That sport, along with football, not only saved my life in Vietnam, it allowed me to save a lot of other lives. Was I scared? Of course. I’m not going to lie to you. But I had some brothers to take care of.”

As an adult, he took care of young men in a different way. “When I came home, I said my first job for (the Legion) would be running its American Legion Baseball program, which I did for 35 summers,” says McCloughan, who became the post’s second vice commander a few years ago. “That will be my service to you.”

Inside the post is a large collection of trophies won by McCloughan’s South Haven teams.

“My fondest memory is that I did it the way it was supposed to be done,” he says. “It’s not about those trophies, it’s about the events those young men got to participate in and the character that was built.”

Several of McCloughan’s players attended the Medal of Honor ceremonies in the nation’s capital earlier this year, including twins Joe and Ryan Hager. They played hundreds of games of high school and Legion Baseball for McCloughan in the late 1990s, following in the footsteps of their father, Joe, who played for him in the 1970s.

According to the Hagers, McCloughan preached confidence, urged players to play hard throughout the entire game and taught them to never be intimidated by anyone. Ryan had heard McCloughan served in Vietnam, but he knew little more than that. Rather than boasting of his heroics, the coach drew on his experience to teach players about life.

“Jim used to say that he dealt with a lot of kids our age in Vietnam and that they were in a lot worse circumstances than we are in right now,” Ryan says, recalling a speech after a tough loss. “He would say, ‘You guys can thank your lucky stars for the freedom you have and shake off this loss. Trust me, there are worse things you can be facing in life right now.’”

McCloughan also taught his players to be consistent and treat others with respect.

“He treated everything he coached as a way to teach a life lesson,” Joe says, recalling McCoughlan’s demands to never give up, regardless of opponent or the score. “He always believed in all of us. Everybody who played for him, he fought for tooth and nail.”

During a game in which the team batted around one inning, Joe ended up making two outs. When McCloughan asked Joe how he could let that happen, he responded, “Coach, we’re up by eight runs.” That didn’t matter to McCloughan – he wanted all of his players to play their best, no matter the score, no matter the opponent.

That was the motivation Joe needed. He hit a home run on his next at-bat.

McCloughan built a winning tradition in the high school. The baseball team was regularly ranked in the top 10 in the state and set various records while the Hagers played. Off the field, he worked on statistics into the early morning hours. He also advocated on behalf of his players for all-star recognitions and college opportunities. The twins went to Elmhurst College in Illinois to play for Clark Jones, another McCloughan protégé.

“He’s not bashful or shy,” Joe says. “But he always shied away from his own personal
accolades and attention. Instead, he focused on what everybody else did. He worked hard for all of us. It doesn’t matter what he gets his hands into, he’s a winner.”

Henry Howard is deputy director of media and communications for The American Legion.