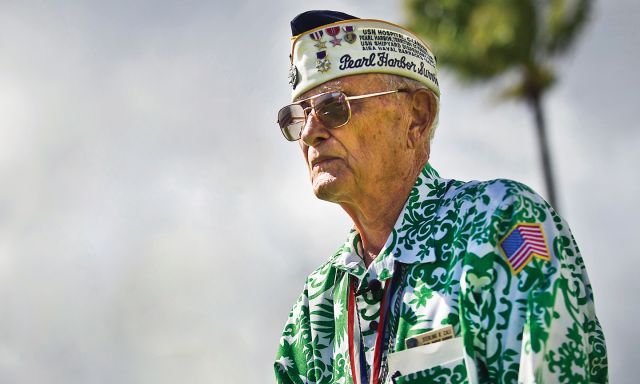 A rising sun was the first sign to Sterling R. Cale that something was off. But rather than the sun, it was Mars, the god of war, that became his uninvited and all-too-frequent companion in a military career that spanned from World War II through the Vietnam War.

On the morning of Dec. 7, 1941, Cale was a 20-year-old Navy hospital pharmacist’s mate stationed at Pearl Harbor. He’d just eaten breakfast and was walking to the receiving station when he noticed something happening on Battleship Row.

“‘How come they’re bombing the battle wagons?’” he thought at the time. “‘We don’t train on Sunday! Must be some sort of National Guard or reserve activity’ .... But then, as I was watching, a plane came by with the Rising Sun on the fuselage, and I said, ‘My God, those are Japanese planes!’”

In that moment Cale’s life, and the world, changed. Though he wasn’t a strong swimmer, Cale walked into shallow harbor waters to retrieve wounded and dead bodies over the next two hours.

“I only picked up 46 people,” he told The American Legion in 2019. “Some of those people were dead already. Some were badly burned, and I would try to pick them up and the skin would come right off their hands. Some of them were just tired because they were blown off the ship or jumped and had to get ashore.”

A life member of John R. Rowe American Legion Post 17 in Honolulu, Cale, 98, has told the story of his Pearl Harbor experience hundreds of times –often with tourists to the Pearl Harbor National Memorial, and the handful of living survivors who visit. “In the last 10 years we talked to 25,000 students from fourth grade up to college. We told them all about it. Japan didn’t like to let anybody in their country know how they attacked our country and our ships.”

Like most people in his generation, Pearl Harbor was Cale’s first exposure to combat. A farm boy from Macomb, Ill., Cale enlisted in the Navy with the intention of serving in the dirigible airship program at Lakehurst, N.J. But the 1937 Hindenburg disaster led to the program’s cancellation and a change in Cale’s plans. After the attack on Pearl Harbor, he was attached to the 1st Marine Division, where he would serve as a corpsman at Guadalcanal.

“I actually treated the wounds of Japanese prisoners, the same as our Marines,” Cale said.

Having had the full experience of Navy and Marine Corps life, he transferred to the Army in 1948. Two years later, his captain at the 5th Regimental Combat Team asked, “Are you ready, Cale? You’re going to Korea.”

There, he was entrenched in the north, where the fighting was fierce. “We kept mowing down people coming across the Chinese river. I said, ‘What’s wrong with people?’ They didn’t know when to stop. The Japanese didn’t know when to stop .... Only thing different with the Chinese is when they came across the river, only one guy would have a weapon. The rest would have farm implements – scythe, sickle, machete, hoe – waiting for the first guy to get killed so they could get a weapon.”

The enemy’s tenacity wasn’t the only threat. Explosive booby traps set by North Koreans and subzero temperatures added to what Cale described as a hell on earth. “I slept at night with a grenade in each hand because the North Koreans were coming down and slitting throats. If anybody like that came near me, I’d just have to open one hand and we’d both be gone.”

In 1955, Cale was sent to Vietnam as part of a 19-member U.S. team assigned to observe the French presence there. In total, he spent nine years in Vietnam as a soldier and later a State Department official. His duties ranged from military intelligence to medical support.

Lt. Col. John Gilbertson, an infantry adviser with the Cay Mai intelligence school, spoke highly of Cale’s service in South Vietnam in a letter of commendation.

“By teaching English to officers, soldiers and their families, by his knowledge of the people, their language, customs and taboos, MSgt. Cale was able to realize the real, intimate trust that is so often illusive in an advisory function,” Gilbertson wrote. “His model behavior and appearance, his friendly but businesslike manner with all Vietnamese peoples, has produced outstanding results from an academic standpoint, but more importantly it has meant untiring efforts to cement the bond of friendship between the Vietnamese people and the U.S. advisers representing the government of the United States, and is in keeping with the current policy of U.S. military participation in Civic Action Programs which benefit the people of an underdeveloped country.”

Cale retired from the Army as a command sergeant major, and continued to work for the U.S. government until his final assignment at the officers’ club at Hawaii’s Schofield Barracks. At 83, his 57-year government career came to a close.

In the afterword of the book “Sterling Cale: A True American,” Cale’s son, Sterling V. Cale, writes, “May we take the life of one man and his family to heart, and emulate it to continue our country’s great legacy and remember the sacrifices that were made for our freedom.”

Today, Cale is believed to be the last living military Pearl Harbor survivor still residing in Hawaii. His home is just a few miles from where the attack occurred.

“It’s always on my mind,” he said. “I know what happened, how it happened, (but) I can never understand why it happened.”

John Raughter is deputy director of media relations for The American Legion.