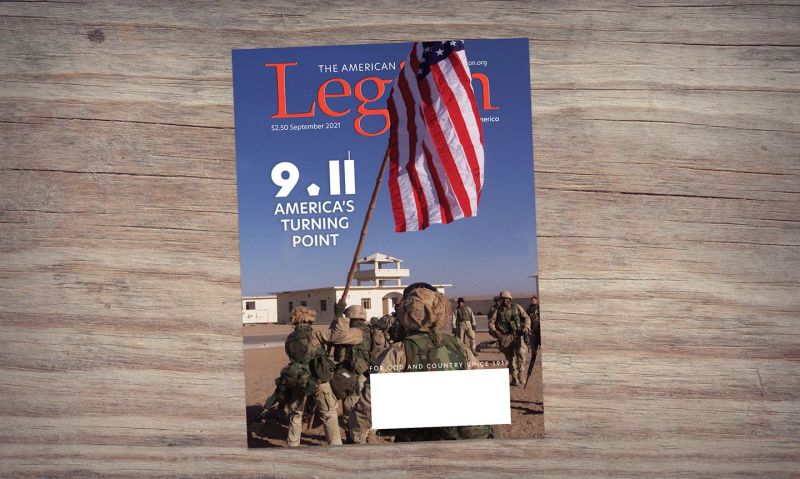 The September 2021 American Legion Magazine digital edition commemorates the 20th anniversary of 9/11 with  tributes to the all-volunteer force that served in an extended war, a profile of an American Legion family forever changed by the attacks, a capsule history of the war on terrorism and more. The clickable digi-mag is available through MyLegion.org.

• Col. Matthew Amidon, director of the Military Service Initiative at the George W. Bush Institute, describes the “distinctive legacy and unique set of ongoing challenges” for post-9/11 veterans and their families. They are who we want “on our campuses, in our communities and businesses, and at the forefront of our society, leading through the issues we face as a nation,” he writes.

• In “The McGowans and Sept. 11,” Henry Howard tells the story of an American Legion family whose lives were directly affected by the terrorist attacks. Vince McGowan, a Vietnam War Marine Corps veteran and member of Sgt. Carl G. Tos American Legion Post 1396 in Manhattan, played a key role in rescue efforts. His wife, Brenda, is a flight attendant who flies the routes one of the hijacked planes was supposed to take. And their son, Doug, was at the Marine Corps’ Basic School on the morning of Sept. 11. “The commanding officer said, ‘We’re at war now, gentlemen,’” Doug recalls.

• Jared Lyon, president and CEO of Student Veterans of America, says today’s veterans are uniquely positioned to lead in the post-COVID economy. With 68 percent attending college after service, post-9/11 veterans are the most educated and successful in the country’s history, he writes.

• National Commander James W. “Bill” Oxford calls on all American Legion posts to roll out the red carpet to the millions of men and women who deployed in the 20-year global war on terrorism. “We embrace this ‘multigeneration’ of warriors as patriots whose talent, service and character equal that of any group of veterans who preceded them,” he says. “They should have no doubt they’ll find brotherhood and sisterhood in The American Legion.”

• Starting Aug. 16, The American Legion’s Tango Alpha Lima podcast began releasing episodes of a special series commemorating the 20th anniversary of 9/11, one each weekday. Guests include Past National Commander Ric Santos, who was on Capitol Hill that morning to present The American Legion’s priorities to Congress; Jimmy Brown, a New York City firefighter who escaped one of the towers; and Army veteran Jessica Lynch, who discusses her nine days in captivity, her rescue and more. Click here to download each episode in audio or watch on YouTube.

• Sgt. Edward Younger, a World War I veteran and member of Van Buren American Legion Post 421 in Chicago, had the distinct honor of selecting the Unknown Soldier from four unmarked caskets at Chalons-sur-Marne in 1921.