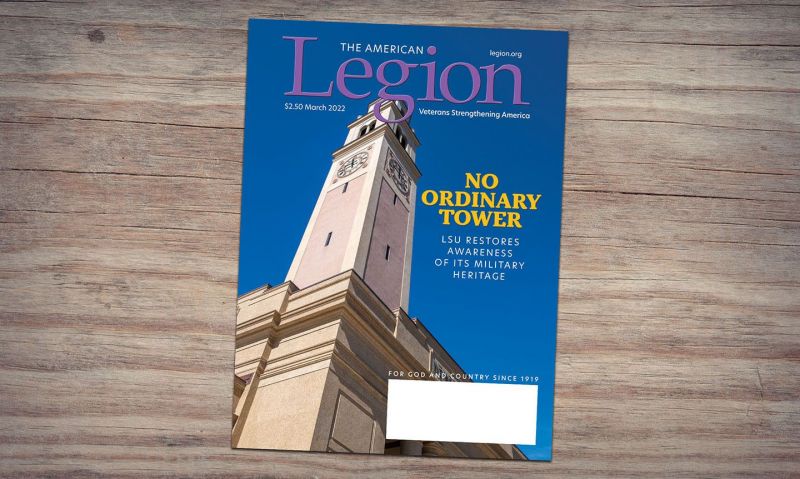 Don’t miss the March 2022 American Legion Magazine digital edition, which includes feature articles on the restoration of LSU’s iconic American Legion-funded bell tower, efforts to add more states to the union, the “angels” of Con Thien, and more. The clickable digi-mag is available through MyLegion.org.

• Built largely from funds raised by the American Legion of Louisiana in the early 1920s, LSU’s Memorial Tower honors alumni and Louisianans who died in the Great War. Now, a $15 million restoration is reviving awareness of the university’s military heritage.

• In “New State of Mind,” Alan W. Dowd looks at current efforts to add more stars to Old Glory, from Puerto Rico to Washington, D.C., to Guam. “There is no limit on the number of states, no geographic boundary, no timeline,” he writes, “just a constitutional invitation to expand.”

• In “Hill of Angels,” retired Army colonel and Vietnam War combat veteran Keith Nightingale describes how the firebase at Con Thien modeled the simplicity of the battlefield – “its complications, casualties and, above all, brotherhood.”

• As Medal of Honor Day (March 25) nears, National Commander Paul E. Dillard encourages Americans to read the stories of our nation’s real-life superheroes at the Congressional Medal of Honor website – including that of Telesforo de la Cruz Trinidad, the first Filipino in the Navy to be awarded the nation’s highest military award for valor. Last fall, the Legion’s National Executive Committee passed a resolution calling on the secretary of the Navy to name the next guided-missile destroyer for Trinidad.