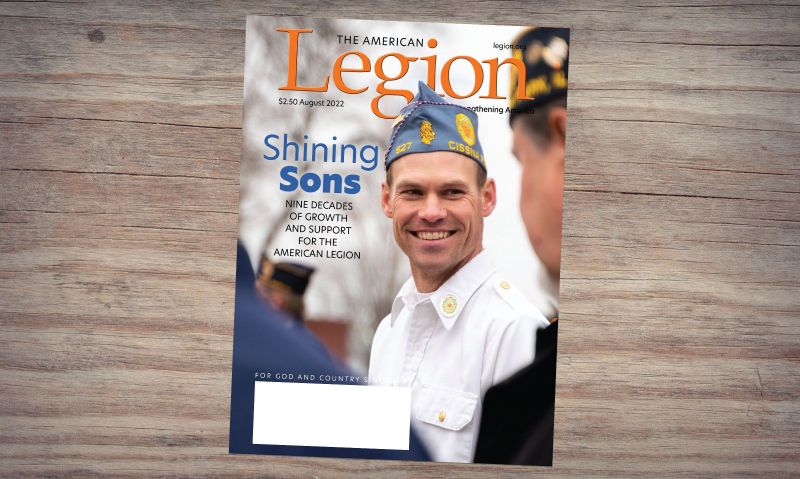 Don’t miss the August issue of The American Legion Magazine, with stories on the 90th anniversary of Sons of The American Legion, the Legion’s support for foreign-born U.S. veterans seeking citizenship, a model to end GI Bill abuse and more. The clickable digi-mag is available through MyLegion.org.

• As Sons of The American Legion celebrates 90 years of service, the program is on the cusp of an all-time high in membership. “The amount of fundraising the Sons have done to support programs of the Legion has been monumental,” says Michael Fox, the Sons’ 2021-2022 national commander. “It’s something the Sons take a lot of pride in – that and sponsoring so many Boys Staters, American Legion Baseball teams, Scouting troops ... the Sons take an active role.”

• In “Broken Promises,” Ken Olsen describes the obstacles faced by foreign-born servicemembers and veterans trying to obtain U.S. citizenship, despite long-standing laws and favorable court rulings. A bill before Congress – the Veteran Service Recognition Act – would assist immigrants in obtaining citizenship through military service, provide a military advocate to servicemembers and veterans facing deportation, and help bring deported veterans home. “We owe it to them to fix this injustice,” says Mario Marquez, director of The American Legion’s National Security Division.

• A six-state pilot program will test an American-Legion supported model to weed out bad actors among schools that accept GI Bill benefits. “Risk-based reviews are a game-changer,” says Joseph Wescott, The American Legion’s higher education consultant and former president of the National Association of State Approving Agencies. “This new model allows staff to focus on protecting (veteran) students from schools that leave them worse off or are likely to suddenly shut down.”

• On the 78th anniversary of D-Day, hundreds gathered in Sainte-Mère-Église to dedicate the first of two “Statues of Liberation,” honoring Brig. Gen. Theodore Roosevelt Jr., son of the 26th U.S. president and American Legion founding leader.

• High prices and lack of availability have helped create a car rental crisis. Travel writer Lyn Mettler offers some tips to how to save when renting vehicles, including price tracking, booking in advance and loyalty program perks.

• Passage of the PACT Act is the latest example of what a strong, audible American Legion membership can do to help veterans in need, National Commander Paul E. Dillard writes. “Like everything else we accomplish, success happens only through membership retention, growth and voice.”