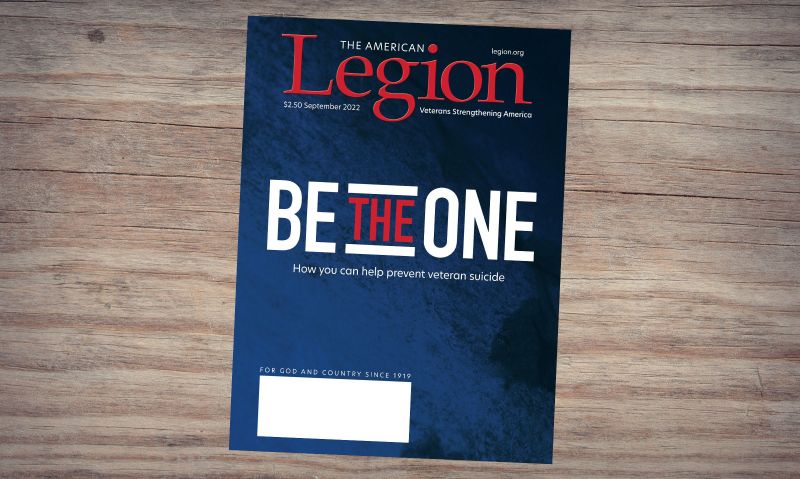 The September issue of The American Legion Magazine highlights the organization’s Be The One campaign to reduce the rate of veterans suicide, as well as resources, education and promising therapies to treat PTSD. The clickable digi-mag is available through MyLegion.org.

• In the first of a two-part series, David Rudd – former president of the University of Memphis, Gulf War Army veteran and American Legion life member – discusses how his research is opening the door to further exploration for solutions to the veteran suicide epidemic. Plus, learn how you can “Be the One,” through an American Legion campaign that is educating and empowering veterans, spouses, caregivers, family, friends and others how to recognize when a veteran is at risk.

• In “Threatcasters,” Alan W. Dowd describes how fiction writers’ gift for imagining the unimaginable offers the military a tool for predicting and planning for future wars. “Like latter-day Cassandras,” he writes, “novelists continue to offer a glimpse of what lies ahead if our leaders continue to think unimaginatively about our enemies.”

• Legionnaires join hundreds of others in Missoula, Mont., to commemorate the 125th anniversary of the 25th Infantry Bicycle Corps’ historic 1,900-mile ride to St. Louis. The Iron Riders’ journey “is considered the greatest cycling experiment ever undertaken by men in the military,” says Ron Jones, a member of American Legion Post 46 in Culver City, Calif. Watch Buffalo Soldiers re-enactors kick off a week-long celebration with a ride to downtown Missoula.

• In “Calm in Chaos,” Keith Nightingale tells the story of Army medic Dennis Fujii, who treated South Vietnamese troops on the ground in Laos – and 52 years later, received the Medal of Honor for his bravery and heroism under fire.

• American Legion posts and programs learned to do their work through video conferencing and other online platforms during the pandemic. National Commander Paul E. Dillard calls on Legionnaires to continue to embrace technology to grow our ranks, by encouraging veterans to join, renew or auto-renew at legion.org and MyLegion.org.