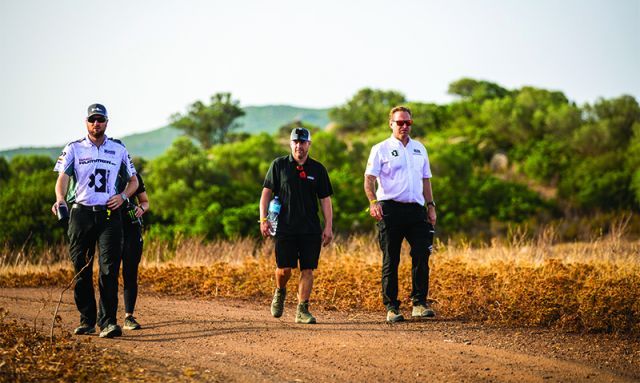 “All you need to do is save one life, and that’s it,” the retired Navy SEAL said, zeroing in on a single word to brand and describe The American Legion’s campaign to reduce the veteran suicide rate.

Berkenfield understands why Be the One is important. He’s lost a brother and fellow SEAL to suicide. Anyone can “Be the One,” he says. Veterans, spouses, friends, civilians and caregivers all have the opportunity to save the life of one veteran.

At its core, the campaign aims to increase awareness of the veteran suicide epidemic, destigmatize mental health counseling and develop solutions.

Be the One also encourages veterans to ask for help when they need it.

Berkenfield’s advice to family members, caregivers and friends is to not wait until the veteran says things like, “I’m selling everything in my house,” “I’m drinking myself under the table” or “All my relationships are failing.” Instead, pursue a connection early on to build trust. “Once you start getting in front of that, veterans know they have a support system.”

There’s no one-size-fits-all guideline for creating one’s own support system, though. Berkenfield found his working for Chip Ganassi Racing (CGR), running its Extreme E program. He travels worldwide with the all-electric, off-road program, which promotes awareness of electrification as well as women in motorsports. While he’s still part of a team, he says the stakes were higher when he was serving in uniform.

“There are levels of accountability in the special operations community and in the whole military that are higher than most other organizations,” he says. “Life-or-death moments are there. If I’m a parachute rigger in charge of packing my team’s parachutes, their lives are in my hands. There’s a million versions of that throughout the military. But for someone, say a hedge fund manager, It’s not life or death.”

Both the racing team and SEALs, though, require every member to prioritize the group over the individual. Berkenfield is on a mission to further solidify that teamwork at CGR. He’s developing a wellness program to help forge bonds among teammates while easing their stress and improving their performance.

The American Legion is also a way for veterans to find the camaraderie they often miss after separating from the service.

“Being part of The American Legion is an instantaneous fix,” he says. “An important part of the Be the One conversation is having an organization you have a natural fit with. The younger generation of veterans understands that and relishes it.”