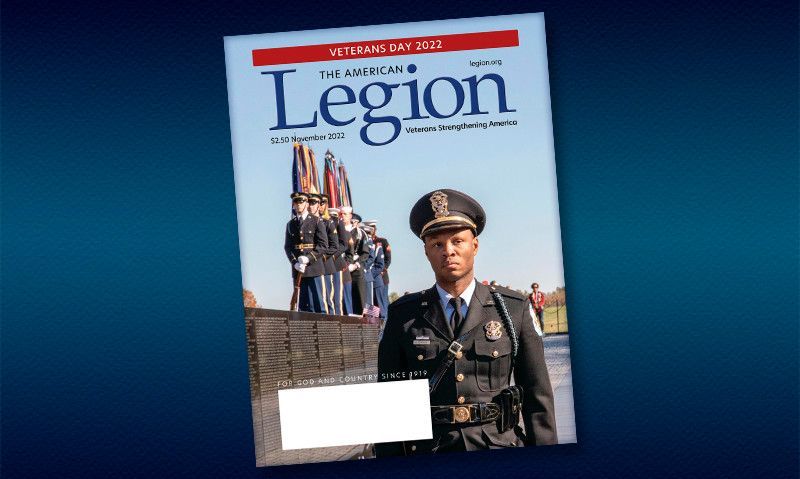 Don’t miss the November issue of The American Legion Magazine, featuring articles on the history of criminal responsibility in warfare, the 40th anniversary of the Vietnam Wall and a new veterans lifetime pass to national parks, along with full coverage of the Legion’s 103rd National Convention in Milwaukee. The clickable digi-mag is available through MyLegion.org.

• In “War & Reckoning,” Michael Bryant traces the evolution of the concept of “war crimes,” and discusses the likelihood of achieving international justice for crimes by Russian forces. “Rarely in history have the heads of powerful states been prosecuted for international crimes,” he writes. “Putin’s position at the center of a nuclear state would seem to be unassailable …. (Yet) the world community might best do what it has been doing the past several months: gathering evidence of Russian crimes and holding it in reserve for the day, should it arrive, when the wheel of fortune turns.”

• On the 40th anniversary of the dedication of the Vietnam Veterans Memorial, The American Legion reflects on its leading role in raising funds and supporting the Wall’s construction. As more than 15,000 Vietnam veterans marched down Constitution Avenue that day, the Legion “was very visibly represented, with blue caps in every contingent and department colors in most.”

• National Park Service Director Chuck Sams unveils a new lifetime pass that gives veterans and Gold Star families free entrance to more than 2,000 federal recreation areas, including national parks, wildlife refuges, forests and other sites. “I’m proud that we’re able to offer this pass to convey our immense gratitude and respect for those who have selflessly served and defended our country,” he writes.

• In a new section called “On Point,” The American Legion Magazine spotlights its legislative efforts on Capitol Hill. This issue looks at H.R. 6411, the STRONG Veterans Act, which aligns with the Legion’s Be the One campaign to prevent veteran suicide and includes dozens of provisions the Legion has supported as stand-alone bills to improve mental health care for veterans.

• Legionnaires join military officials in calling on Congress to award the Medal of Honor to retired Navy Lt. Royce Williams, who downed four Russian MiGs in a single dogfight off Korea 70 years ago this month.