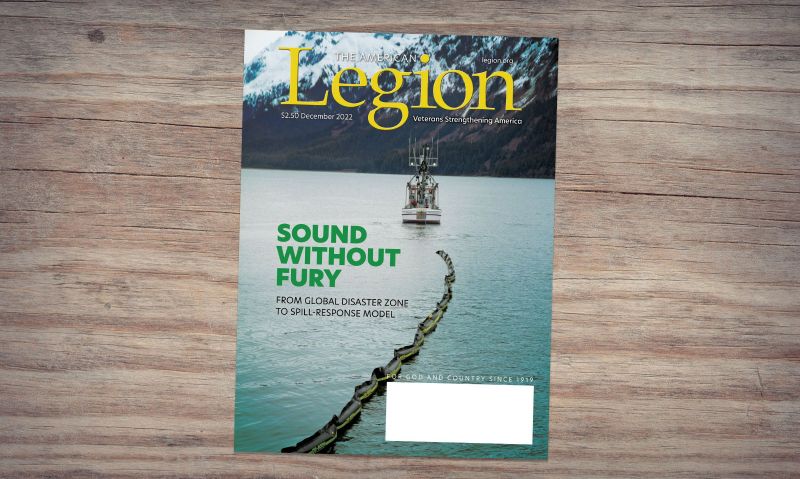 Check out the December issue of The American Legion Magazine, with articles on lessons learned from one of history’s worst oil spills, a memorial to “living legend” Dust Off pilot Maj. Charles Kelly, the Pennsylvania Legion Riders’ heroic role in the story of a girl battling cancer and more. The clickable digi-mag is available through MyLegion.org.

• In this month’s cover story, Jeff Stoffer describes how the Coast Guard, the oil and fishing industries, and an Alaskan community work together to avoid a repeat of the 1989 Exxon Valdez disaster. “An ounce of prevention is worth a billion dollars for a spill of that size,” says Joe Lally, director of programs for the Prince William Sound Regional Citizens’ Advisory Council and former commanding officer of Coast Guard Marine Safety Unit Valdez. “It’s our job now to keep complacency from creeping back in.”

• What may be the first and only memorial to an American soldier in Vietnam honors Army Maj. Charles Kelly, killed during a helicopter medevac July 1, 1964. “His last words still shine brightly and are an inspiration,” writes retired Maj. Gen. Patrick H. Brady, “the combat standard of all medical resources to this day: ‘When I have your wounded.’”

• In her courageous battle against cancer, a 6-year-old girl is getting support from the Pennsylvania American Legion Riders – or, as they’re known in a children’s book based on her story, “Princess Ariella’s Knights of Leather and Steel.”

• Thanks to relentless American Legion grassroots advocacy, there’s bipartisan support for legislation that would expand eligibility for concurrent receipt of military retirement pay and VA disability compensation to qualified military retirees. This month’s On Point spotlights the Major Richard Star Act (H.R. 1282/S. 344), which would end the “disabled veterans tax” that has at times been mischaracterized as “double dipping.”

• Learn about the many ways you can support American Legion programs and services for generations to come, through planned giving. Opportunities for charitable gifts include the Legion’s Veterans & Children Foundation, the Legacy Scholarship Fund, Operation Comfort Warriors, the National Emergency Fund, youth programs, flag education, troop support and more.

• National Commander Vincent J. “Jim” Troiola says everyone can play a part in reducing veteran suicide through the Legion’s Be the One campaign. “Very few of us are trained counselors or mental health professionals. But we are capable of listening, referring and following up …. Ask and encourage veterans to seek help before they pass a point of no return.”