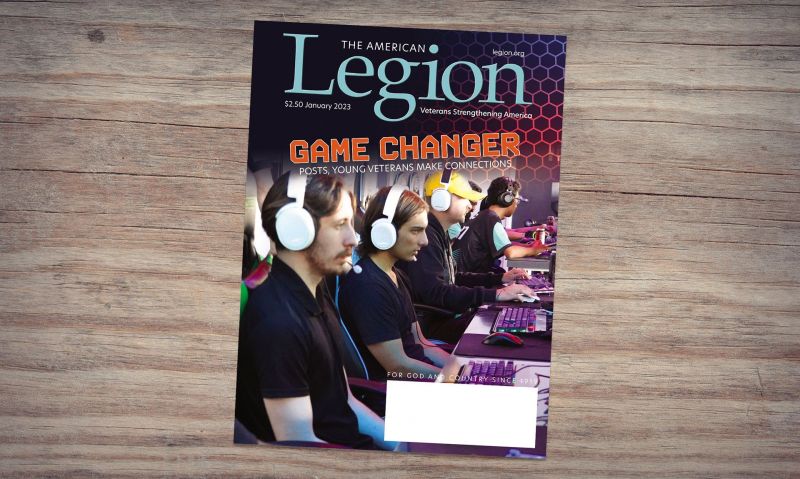 Don’t miss the January issue of The American Legion Magazine, which includes articles on the rise of veteran online gaming, an Oregon post’s apology to Japanese American World War II veterans, cancers and illnesses covered under the PACT Act and more. The clickable digi-mag is available through MyLegion.org.

• As the veteran gaming community grows, American Legion posts have an opportunity to reach a younger demographic. “We’d like to have … gaming stations in posts across the country,” says Chris Earl, founder of Regiment Gaming and a California Legionnaire. “With all the peripherals and gaming equipment, (a four-PC setup) costs less than $10,000. It’s easy to monetize gaming and make this money back. A lot of post-9/11 veterans are definitely going to come into these posts.” Watch a video about Regiment Gaming’s four-PC gaming station at the 103rd American Legion National Convention in Milwaukee.

• In “The High Road,” Ken Olsen describes how the Nisei Veterans World War II Memorial Highway is helping promote healing between Oregon’s Japanese American community and American Legion Post 22 in Hood River. On Veterans Day, Post 22 leaders publicly acknowledged and apologized for its hostility toward Japanese immigrant families in the 1940s, including removing the names of 16 Nisei soldiers from a local honor roll in late 1944. “I’m thankful that The American Legion has stepped up to correct a historical wrong,” said Eric Ballinger, a fourth-generation Japanese American who first proposed the designation. “It sets a good example moving forward.”

• American Legion Post 359 in Carrizo Springs, Texas, is committed to collecting and publicizing veterans’ stories – including oral histories of the Mexican airmen of Squadron 201, known as the Aztec Eagles.

• The American Legion looks back on two years of high-speed performance with Chip Ganassi Racing, from NASCAR legend Jimmie Johnson kicking off a record-breaking Giving Tuesday for the Veterans & Children Foundation in 2020 to Tony Kanaan driving the Legion’s Be the One car to a third-place finish in the Indianapolis 500 last May.

• With 11 Florida posts damaged by Hurricane Ian and six counted as total losses or inoperable, as well as many more American Legion and Sons of The American Legion members needing help, National Commander Vincent J. “Jim” Troiola encourages donations to the National Emergency Fund, which provides direct, immediate cash grants in the wake of natural disasters.