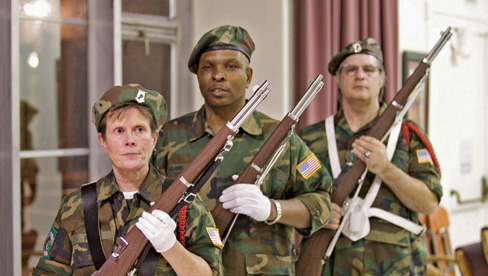 When Robert L. Miller Sr. of South Bend, Ind., saw a photo in a local newspaper of a homeless person sleeping in a wooden crate, he couldn’t help but wonder if the man was a veteran.

A conversation with his granddaughter, who works at the city’s Center for the Homeless, confirmed that a large number of the center’s clients served in the military at one time. Nationally, VA surveys estimate that one-third of all homeless adults are veterans.

A former Navy officer, Miller wanted to develop esprit de corps among veterans living at the center, using a military motif. He bought some fatigues and recruited others to help build a drill team. In January 2009, 10 men showed up at the first meeting of “Miller’s Vets.”

The group had an inauspicious start.

“Somebody yelled, ‘Forward, march!’ and they started around the room, no semblance of anybody in step,” Miller says. “I looked over at Danny carrying the flag. I saw his shoulders start to come back. Then I saw his head go up. When he completed that first turn, he was never the same.”

That flagbearer was Danny Forrester, a 56-year-old Army veteran. He was a well-paid autoworker with a house and a 401(k), but he was laid off and eventually lost his home to foreclosure. He ended up living on the street for two years, sleeping under a bridge.

He came to the Center for the Homeless one night to escape the cold, and found more than a warm bed. The center offered a path to help him get back on his feet, and soon he joined Miller’s Vets.

“It saved my life,” Forrester says.

The drill team’s first public event was a Memorial Day parade, where it won first place for marching units.

“At the end of that parade, they weren’t the same guys,” Miller says. “Their self-esteem started to return.” Since then, the group has participated in more than 50 events, including parades, veterans funerals and a dinner honoring Sen. Richard Lugar, R-Ind.

When a building went up for sale near the Center for the Homeless, Camilleri said he thought it would be a great place to house a center specifically for veterans. Miller didn’t hesitate; he bought the building and gave it to the center. Private funds and government grants will pay for renovations and ongoing program support.

The Robert L. Miller Veterans Center is scheduled to open on Veterans Day.

“Judge Miller has made an enormous impact,” Camilleri says. “He’ll always be remembered for reaching out and saying he wanted to do something for the veterans.”

Luanne Radecki Blackburn is a freelance writer in Indianapolis.