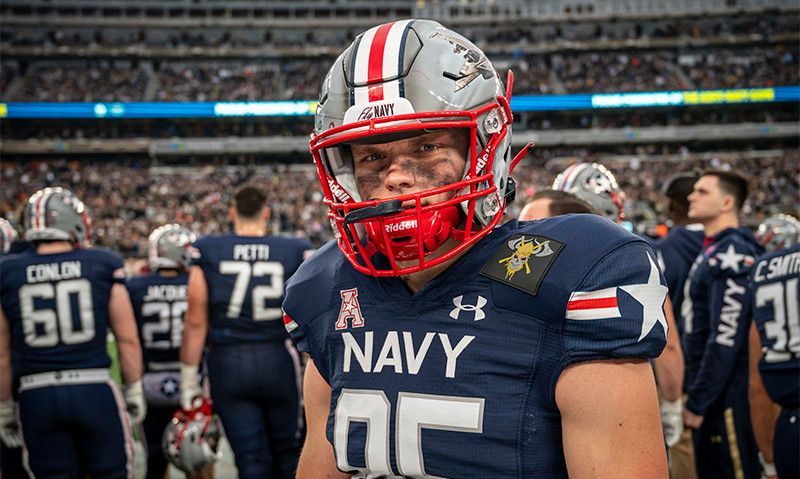 If you need proof that won-loss records mean nothing in the Army-Navy game, just watch a recording of Saturday’s 122nd edition of “America’s Game.”

Navy carried a 3-8 record into the contest at MetLife Stadium in the shadow of New York City. Army had amassed an 8-3 record that seemed to foretell a blowout. Indeed, Army quarterback Christian Anderson blasted through a hole in the line on fourth play from scrimmage and raced 56 yards for a touchdown. A pair of field goals lead the Black Knights to a 13-7 advantage at halftime.

But Navy thoroughly shut down the Army attack in the second half, limiting the Black Knights to just four possessions, 21 plays, 57 offensive yards and zero points. After intermission, the Midshipmen scored 10 points and triumphantly “sang last” after claiming a 17-13 victory.

In Navy’s 12 games this year, the Midshipmen faced 11 opponents who are going to post-season bowl games. By any accepted standard, Navy had one of the three toughest football schedules in the nation. Those eight losses were not reflections on the team’s. athletic failures; they were demonstrations of the greatness of their opposition. Navy might have suffered eight defeats, but the Midshipmen felt they were never beaten.

Saturday’s battle was a contest that showcased a variety of military leadership attributes: patience, teamwork, desire, determination, resourcefulness and execution. The combination of group coordination with individual great efforts came together to give Navy a victory against its greatest rival. Coach Ken Niumatalolo recognized that, despite the losing record, this Navy team was special.

“I have been coaching 31 years, 24 at the Naval Academy,” Niumatalolo said. “I don’t know if I saw a better display of leadership than I saw from our seniors. We had a lot of close losses to tough teams. A lot of people (were) saying (critical) things. But they kept our team together. Every week they came to battle, they kept leading. I just told them I know they are going to make great officers, but more important, they are going to make great husbands and fathers.

“That has always been my mantra – when things get tough, don’t run out on your family, keep fighting for your family. When things get tough at work, keep leading with your sailors and Marines. That (Army team) was a really good team. But we had played (other) tough teams, so I knew we would be ready.”

This was a game of great plays that didn’t make the box score. None were more important than a stunning fourth-quarter effort by arguably Navy’s best athlete – 6-foot-3, 240-pound senior linebacker Diego Fagot, who entered the game as the team leader with 85 tackles this season.

With 13:30 left and Navy holding a 14-13 lead in a fourth-and-1 situation on its own 34-yard line, the Midshipmen set up for a punt. Army faced them with an unbalanced line, six players right of center, just two to the left. Fagot was unexpectedly an up back on the left. When the punter called for the ball, the center hiked it to his left, nearly hitting Fagot in the helmet. Fagot’s quick reflexes enabled him to grab the ball and dash to his left, pushing past one defender and crashing over another before he was brought down after gaining four yards and earning Navy a key first down.

“In the game plan, we had talked about a possible fake,” said Fagot, who led Navy with nine tackles. “I guess our snapper just assumed that I called it and he just snapped it to me. It was a reaction play – I wasn’t really expecting it. It didn’t know it was coming. I just reacted to it. When I caught it, I just started running straight.

“To be honest, I don’t think the ball has bounced our way all year, but (today), for once it did. We faced a lot of adversity this year, but we kept getting up and coming back. We’re going to keep playing as hard as we can and we pride ourselves on that. They (Army) call themselves ‘the last of the hard,’ but they’re not – they’re our little brothers.”

Fagot’s effort – the first time he had ever carried a ball in either a high school or college game – sparked a methodical Navy march. They moved the ball 36 more yards and chewed off a whopping 7:20 from the clock before kicker Bijon Nichols nailed a 43-yard field goal to pad the Navy lead, 17-13.

Afterward, it didn’t take long for another underappreciated play to make a huge difference in the outcome. In a third-and-1 situation with less than six minutes in the game, the Black Knights gave the ball to their version of a freight train – 6-foot, 260-pound junior running back Jakobi Buchanan, who entered the game as Army’s leader in rushing touchdowns with 11 and the go-to runner in short yardage situations.

Buchanan blasted through a hole in the line and advanced 10 yards before any Navy defender could grasp him. Finally, Navy’s smallest player on the field – 5-foot-7, 173-pound senior safety Mikey McMorris – dove and grabbed hold of Buchanan’s left leg and foot. Despite being almost 100 pounds lighter than the Army starter, his efforts delayed Buchanan enough until teammate Jamal Glenn could bring him down and limit the gain to just 13 yards instead of a breakaway touchdown. Army never again gained more than nine yards on any single play.

“I know I’m not going to bring him down high, so I went straight for his legs,” McMorris said.  “I was just holding on for dear life, waiting for my teammates to come. I knew I had our brotherhood in my hands so I wasn’t letting go. Luckily, it was enough to slow him down.”

Niumatalolo knows that the discipline and tenacity of his players could help them off the field very soon.

“A lot of my seniors will be serving overseas and protecting our country in a couple of months,” he said. “The reality of that is never lost on me. This is what everything in our program is all about. After this, we will serve together, but on this day we have one goal – to crush Army. My locker room is filled with such great, great people and I couldn’t be happier for them. To end this way … it doesn’t get better than this.”