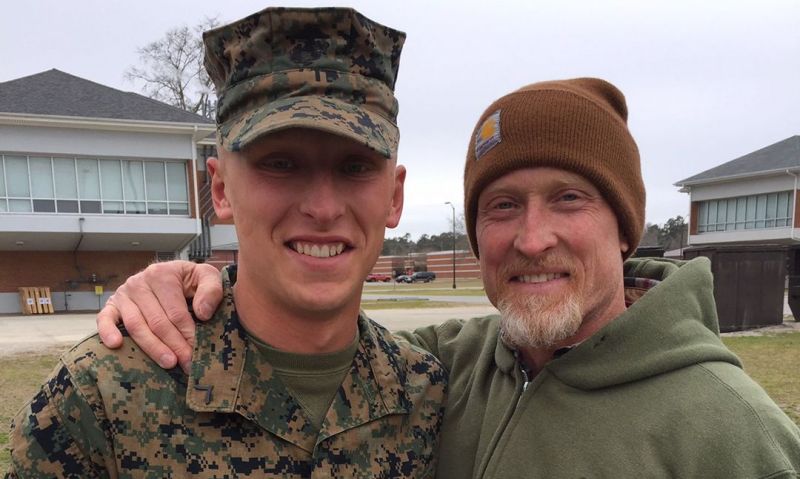 Eric Bartlett (right) served in the Marine Corps from August of 1985 to June of 1989. He’s now eligible for American Legion membership and has joined the Michigan Department Headquarters post and plans to join a local post soon.

When President Trump signed the LEGION Act into law Tuesday afternoon it ushered in a new era for The American Legion. The LEGION Act, formally titled “Let Everyone Get Involved in Opportunities for National Service” recognized all veterans since World War II as being “wartime veterans” and opened Legion membership for all those who served during periods that were previously not considered eligible.

Eric Bartlett of Plymouth, Mich. has been waiting over 30 years to finally be eligible for membership, and was the first member to join under the LEGION Act.

"I'm proud that the U.S. government now recognized that the years I served in the Marine Corps was really war-time service” Bartlett said. “We trained for war and were always ready for war. There were many times we were ready to go at a moment’s notice.”

Bartlett served in the Marine Corps from August of 1985 to June of 1989, sandwiched between the Lebanon/Grenada era, which ended in July of 1984 and the Panama era, which began in December of 1989. An infantry rifleman for over three years Bartlett served with the 3rd Battalion, 6th Marines of the 2nd Marine Division. He would also earn the MOS of Marine Scout Sniper.

Bartlett, who already is a member of the Sons of The American Legion, will become a member of Post 32 in Livonia, Mich., the same post that his step-father is in. Bartlett’s son, Will, also will be transferring to Post 32; he was signed up for a Legion membership when he left for Marine boot camp by Bartlett’s brother, Kevin Bartlett, who is the national judge advocate of The American Legion.

“I am very proud of my son, who is currently serving as a US Marine as an 0311 with 3/6 India Co., 2nd MarDiv.” said Eric Bartlett, a professional fitness trainer specializing in kettlebell and original strength training and a former No. 3-ranked competitor in the Senior World Cross-Fit games. He’s married to his high school sweetheart, Michele.

The LEGION Act extends the ongoing declared period of war was extended back to Dec. 7, 1941, while redefining The American Legion’s membership eligibility dates. The eligibility now span from Dec. 7, 1941, until a time when the U.S. is no longer at war, as determined by Congress.