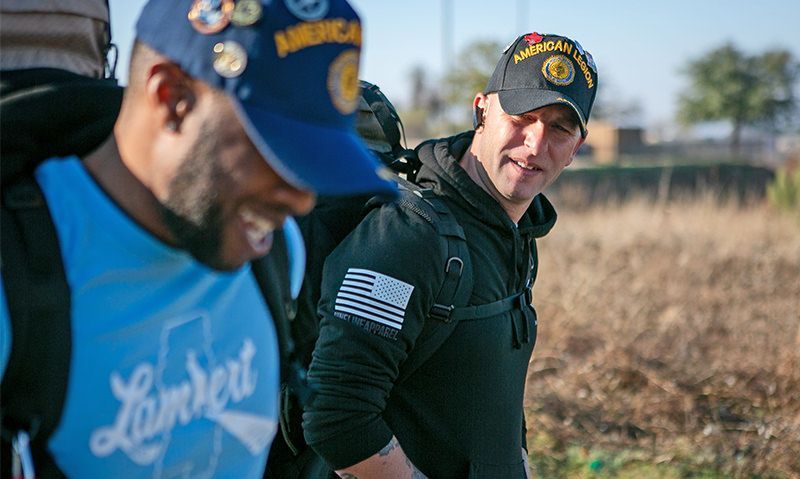 John Ring and Jimmy Mathews head out of Weatherford, Texas, on Jan. 27, 2020, for the Buddy Watch Walk. Photo by Schelley Stone

John Ring drew inspiration from a woman veteran who reached out in her time of need.

She had lost her children before leaving the Army. After her service, she was dealing with the aftermath of military sexual trauma (MST), injuries and an addiction to Oxycontin. Ring tried to get her help from the Vet Court system in Chatham County, Ga. “There are veterans who are going to treatment facilities, where there's nobody that understands what it's like to serve.”

Ring successfully persuaded VA to assist the woman. Now, he says, she’s back on her feet, receiving treatment and has a job.

“She’s doing good,” he says. “But it made me dig deeper. This is one veteran. What about more veterans?”

That experience was the catalyst for Ring’s Buddy Watch Walk Pier to Pier mission, a 2,462-mile walk from the Tybee Island Pier in Georgia to the Santa Monica Pier in California. His goal is to raise awareness about veterans issues such as post-traumatic stress disorder, MST, homelessness and suicide.

“It basically started with one person's struggles,” he points out. “Now we're just trying to help as many veterans as possible. And not just veterans, family members too. Spouses of veterans who are dealing with PTSD because of their spouse. Not only are we creating epidemics of veterans suffering, now we're even going into the family members, and the children.”

Ring, a specialist in the Georgia Army National Guard’s 48th Infantry Brigade, started walking Oct. 1. From when he conceived the idea, he envisioned it as a solo effort. But seven weeks into his journey, he picked up a buddy who will finish with him on May 8 in Santa Monica.

Jimmy Mathews, a recently retired master sergeant in the U.S. Army, heard of the Buddy Walk on social media and reached out to Ring.

“I told him I was inspired by what he was doing and I would like to walk with him,” says Mathews, who joined the walk Nov. 18 in Pearl, Miss., four days after his retirement. “Then he also inspired me to try and do my own walk. Once I joined up with him and started walking, I just decided to go all the way. It was really personal to me and I wanted to help all the others who are dealing with the stigma of not really wanting to talk about having PTSD and all of the other symptoms that drive them to commit suicide.”

For Mathews, his “why” was personal.

He remembers the soldiers he lost to suicide. He thinks about the families they left behind. And he wages his own battle with PTSD.

“It's difficult to talk about but it's needed because that's what leads veterans and others to commit suicide,” he says. “Once you hold all that trauma inside, it just builds up pressure and then you feel like you're alone and you get in a dark place. Others reach out to us and say how much we've helped them through their struggles. A trauma is very serious so we just want them to know they're not alone.”

Hundreds of miles into the walk with Ring, Mathews has already felt a difference in his PTSD. “The walk is helping me cope. My anxiety's a lot lower than it was when I got out of the military.”

When James Gillespie met Ring, he knew immediately that he wanted to help.

After their initial conversation lasted for at least three hours, Gillespie booked Ring a hotel room and brought him to Post 133 in Millbrook for a steak dinner. “He was very well received,” Gillespie says.

For Gillespie, his experience with PTSD is related to jobs after his time in the Air Force. “PTSD situations are not the same,” he says. “I never deployed so I don’t know exactly what others are going through. The only thing I can tell a vet with PTSD is that I will listen to you and I understand. And I want to help you. I’ve lost friends. I’ve lost brothers to this and it hurts.”

Gillespie’s assistance didn’t stop in Millbrook, or even at the state line.

“I wanted to make sure we could help him from here all the way to California,” Gillespie says. “We’re paying it forward for him. We’re doing it because that is what we do.”

Gillespie, a Gulf War era veteran, served at roughly the same time as Ring. Gillespie checks in from time to time on Ring and Mathews, giving them a call or scrolling through their Facebook page. “I do it to make sure they are OK and to see the progress of how the Legion and other cities and towns are spreading the word as they head further west.”

It was a sense of duty for Gillespie.

“Never in my wildest dreams would I have imagined that it would have gotten out there as much as it has,” he says. “I’m absolutely ecstatic that it has. The cities and the news media that have picked up on it and are doing what they are doing.”

It’s at the core of the Legion’s mission.

“This is exactly what The American Legion is and stands for,” Gillespie explains. “We are veterans serving veterans. We are helping them all the way on their journey. You are always going to be there for your brothers and sisters, whether it is in peacetime or combat time. It’s just what we do.”

James Till didn’t hesitate when passed the baton from Gillespie. Till, commander of the American Legion Department of Mississippi, arranged for law enforcement officials to greet Ring at the state line.

The support from Mississippi Legionnaires didn’t stop there.

Throughout the state — from Meridian to Till’s hometown of Pelahatchi to Jackson to Vicksburg— Ring did not have to camp outside or pay for a hotel room, thanks to The American Legion.

“That’s what we do — we work for veterans,” Till says. “We assist them where we can. Sometimes it was rainy and cold when he was here. He’s a pretty tough guy but we would put him up in a hotel room. He came to rely on The American Legion.”

Learning about the Legion

As Ring and Mathews made their way across Texas, posts and Legion Family members continued to support them.

“There is no doubt that The American Legion supports all veterans because we believe a veteran is a veteran,” said former Department of Texas Commander Paul Dillard. “It’s nice to see that the American Legion Family is stepping up and helping these young men on their journey.”

Dillard praised the pair for their efforts to raise awareness about PTSD, homelessness and other issues related to veterans.

“It’s great to see these next-generation veterans who are coming home and doing things like this,” he says. “With these efforts, maybe we can get the attention of the congressional leaders and then maybe they can do a little bit more for veterans. What they are doing is part of our mission for our veterans. So I feel that any posts, units or squadrons should get involved with them. They can always use a helping hand, whether it is a good warm meal or a good warm bed.”

Thanks to Gillespie, Till and other American Legion Family members along the route, Ring and Mathews have only slept outside twice since Montgomery, Ala. “The American Legion has been amazing with their support,” says Ring, a member of American Legion Post 135 in Savanah, Ga.

“In an American Legion post, you have a story of our country,” he says. “World War II veterans, Korean veterans, Vietnam and Desert Storm and younger veterans. I'm really trying to encourage our younger veterans to get involved with organizations like The American Legion. There's no better place that you can get help with PTSD. You can build that camaraderie all over again that you lost in the military by walking into an American Legion and speaking with a Vietnam veteran who's probably had the worst experience serving our country. That's really what I've taken out of this, we all have the same story but it's just so different depending on the time and where we are, where we were in our country.”

Among the takeaways for Mathews, who is also a member of the Legion, is how the organization’s accredited service officers provide free benefits claims assistance to veterans.

“To see them helping us do this has just been mind-blowing to me because I wasn't educated enough on the Legion,” he says. “I blame that on myself. For 25 years, I was just moving back and forth and not really getting involved with the community. And that's something I have time to do now that I'm out, so it's been great and really appreciate their help.”