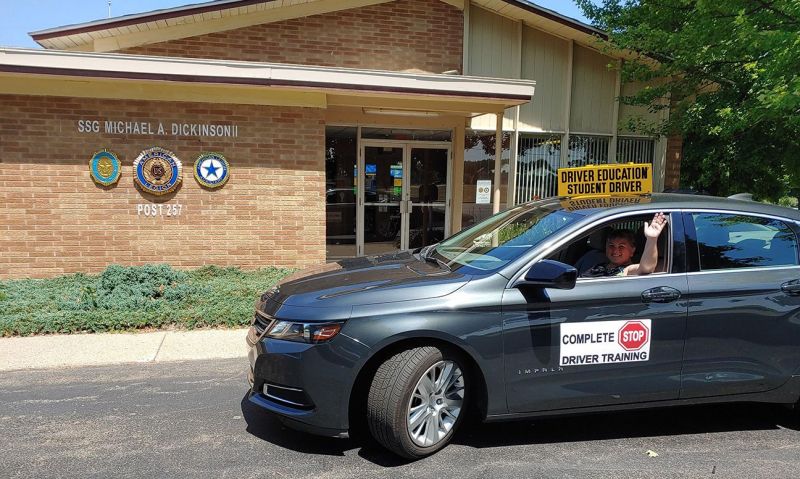 SSG Michael A. Dickinson, II Post 257 in Battle Creek, Mich., has grown its membership by almost 200 percent since 2017. For Post 257 Commander Brian Mohlman, that growth has been in direct relation to the post’s focus on programs and community support.

While the coronavirus has altered the way Post 257 conducts business, it hasn’t altered the focus on community involvement. Since the pandemic hit Michigan, which included more than a 90-day shut-down of non-essential activities, the post has hosted blood drives, provided relief for mounting returnable cans and bottles in local residents’ homes, and hosted an Amateur Radio Nationwide Field Day.

Most recently, local driving school Complete Stop Driver Training reached out to Post 257 looking for an alternate location to house their summer driving classes. For years the classes took place at Harper Creek High School, which is located directly across the street from Post 257 and is where the post’s namesake graduated from high school. Because of Michigan’s coronavirus restrictions, no classes can take place on school grounds.

“Our post recognized the need to provide this much-needed educational program to local youth as a vital part of their overall educational experience,” Mohlman said. “With class size restrictions of only eight students, three two-hour sessions are being conducted daily at our post home and continuing over the next three weeks.”

But the students aren’t only learning how to drive. “These (grades) 10-12 students will receive information about American Legion programs, to include Boys State, Student Trooper, the Oratorical competition, and several national and department scholarships,” Mohlman said.

In the most trying time in the nation in more than 100 years, American Legion Post 257 has managed to actually grow its membership. “We, along with a number of other program-driven posts in our department, have actually seen substantial growth in spite of this pandemic event,” Mohlman said. “When times change, you have to be ready to adapt and overcome, or you’ll be left in someone else’s dust. Programs drive membership … no doubt about it.”

Another week, another round-up of our American Legion Family’s efforts across the country during the pandemic.

• A $25,000 grant from Southern California Gas Co. to Imperial County will be administered by American Legion Post 25 in El Centro to provide 1,400 senior citizens in the area with food baskets over the next 12 to 13 weeks. The baskets will include milk, bread, eggs and chicken; Post 25 will provide the baskets to the Area Agency on Aging for distribution to those in need. Around 27 seniors will be served daily through the effort. Post 25 was previously working with Imperial County on food relief efforts. “The American Legion is extremely gracious to be the recipient of this extremely valuable grant from SoCalGas,” Post 25 Legionnaire Tracy Rascoe told The Desert Review. “For more than a 100 years, our organization has been a part of the communities, and it is an honor to be collaborating with the Imperial County Area Agency on Aging to assist in providing aid to those seniors in need within Imperial County – especially during this extremely challenging pandemic.”

• In Vallego, Manuel L. Quezon Post 603 has been teaming up with Rebuilding Together Solano County to provide 70 veterans, seniors, disabled residents and others with fresh and frozen groceries twice a week. On Wednesdays and Thursdays, food is picked up at Costco and then placed in ready-to-go boxes to be distributed to a line of cars. The project has been assisted by grants from Costco, Wells Fargo and Phillips 66.

American Legion Riders from Dearborn (Chapter 364), Wyandotte (Chapter 217), Trenton (Chapter 426) and Southgate (Chapter 478) have scheduled a run for July 18 that will travel through multiple cities and pay tribute to all essential workers who have continued doing their jobs during the COVID-19 pandemic and to the establishments that have remained open during the pandemic.

The Riders will travel through Trenton, Southgate, Wyandotte, Dearborn, Dearborn Heights, Taylor and Inkster, and are asking area residents to stand along the route to wave at the procession. The ride will pass police and fire stations, grocery stores, convenience stores, restaurants and schools. The Riders also will provide sub sandwiches to the Southgate fire station.

American Legion Auxiliary Unit 594 of Eagan had to halt their “Purses with Purpose” project due to the coronavirus but still wanted to do something for area veterans. A Zoom meeting resulted in the idea to send thank-you cards to veterans in the Eagan area and the Hastings Veterans Home.

The packets, which included a card and a poppy, were left on the veterans’ front porches. Each of the more than 250 cards, which were dropped off at the Hastings Veterans Home and five senior living facilities in the Eagan area, contained a personal note.

“Our aim was to have the cards all delivered by July 4 to thank the veterans for their service in maintaining our country's independence,” Unit 594 President Susan Flynn said via Legiontown. “This time of distancing has been hard on everyone, but especially our veterans with little social contact outside their apartments or rooms."

More than 40 donors came to Wilbur J. Price Post 273 in Keansburg’s blood drive, which came at a time when the blood supply is at a very low level because New Jersey Blood Services is unable to run bus drives.

When U.S. Army and Air Force veteran Emmett “Bud” Barnes turned 102 recently, those in Lebanon made sure it was a special day – including members of American Legion Riders Chapter 10 in Albany.

A small parade passed by Barnes’ home and included Chapter 10 Riders, and a Lebanon police car and fire truck. Barnes was able to watch the procession from his porch.

“He’s a fellow veteran,” Post 10 Legionnaire Charlie McCarthy told the Albany Democrat-Herald. “He earned it through his service and the fact he has made it to 102. He deserves all the recognition we can give him.”

Members of Robert H. Hoke Post 272’s American Legion Family in Linglestown organized a drive-by motorcycle parade to show their appreciation and support for eighth grader Becca Noll, who already was battling a serious illness before the pandemic hit.

Using social distancing, the Legion Family members fired a 21-gun salute, presented flowers to Becca and planted a few flags to help cheer her up.