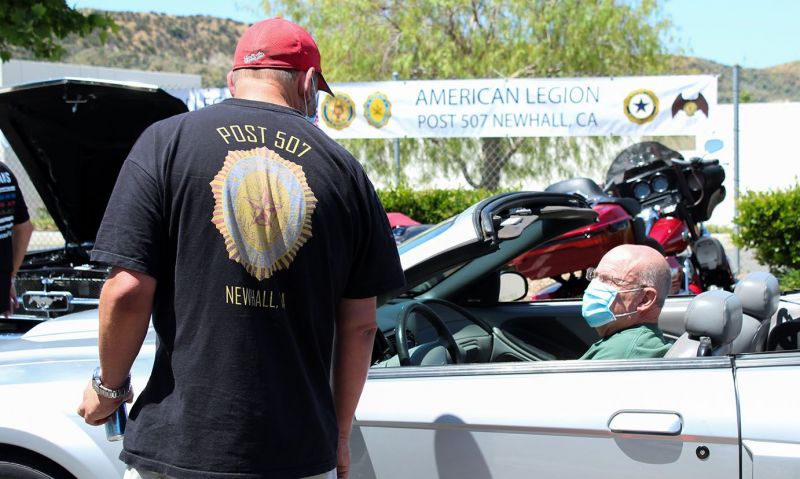 American Legion Post 507 in Newhall, Calif., Sons of The American Legion Squadron 507 and Auxiliary members give away hot dog lunches to veterans in the area during the pandemic.

The American Legion's Consolidated Post Report (CPR) for the 2019-2020 membership year was due to National Headquarters by July 1. To date, over 8,480 of the more than 12,600 American Legion posts submitted a CPR – an average completion rate of 67 percent.

The CPR was established for posts to document external activities, such as volunteer and fundraising efforts, funeral honors and youth program support, from the reporting period of June 1-May 31. This data is collected by National Headquarters to help quantify – for Congress, American Legion media and national leadership – the good that American Legion posts do in their communities every year.

Department of Maryland Commander Philip Dorsey gave Second Vice Commander Ronald Holcombe the role of calling all post commanders and adjutants to remind them that June 30 was the cutoff date to have CPRs in to the department. “We started early,” Dorsey said. “Thanks to my second vice commander, he stayed on top of it. He didn’t let it rest (until all CPRs were in).

“And we learned a lot by calling and communicating with posts.”

Through the phone calls, department leadership learned that several posts didn’t have access to or knowledge of using online technology – everything was done by paperwork. “We had to reach out and assist them,” Dorsey said. This led to the department creating plans to host an online workshop about using Mylegion.org with all post adjutants, as well as finding volunteers within the post that can help post leadership complete CPRs.

“We feel (completing the CPR) is something very important, and we let the post know that,” Dorsey said. Leadership reiterated to posts the importance of having the data for the national commander to share with Congress, “plus, we get to know a lot about what our posts are doing within our department.”

When outgoing Department of Oklahoma Commander Ron Gott sent out weekly reminders on membership renewal and recruiting, he added the status of completed and non-completed CPRs. “I tried to turn it into somewhat of a contest just like membership,” he said. For example, he communicated district membership numbers that named posts in each district that had not recruited any new members; he too “boasted on those that were recruiting. District and post officers took it as a challenge … trying to outdo the other posts and districts.”

Gott said Oklahoma's key to achieving 100 percent reporting was “constant communication with senior officers by myself (department commander) and it worked. And keeping everyone advised of how you are doing number wise across the board is also a key factor.”