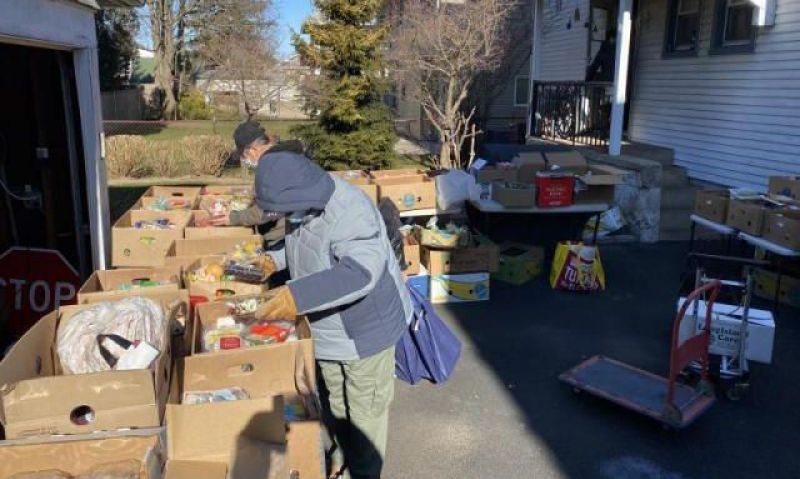 When the coronavirus pandemic hit the Village of Cedarhurst on New York’s Long Island, Lawrence-Cedarhurst Post 339 Commander and longtime activist Syd Mandelbaum began to notice something that troubled him: many of the older – and higher risk – members of Post 339 were having to go to the grocery story to purchase food.

That didn’t sit well with Mandelbaum, whose think tank Rock and Wrap It Up! has for 30 years collaborated with musicians, professional sports teams, corporations, the entertainment industry and others to provide food to millions of hungry Americans.

So Mandelbaum and Nassau County American Legion Adjutant Pat Alesia, a retired brigadier general, came up with the concept of the Veteran Farmers Market. Set up in Mandelbaum’s backyard, the market provides an outdoor, socially distanced setting for veterans to pick up, at no charge, organic fruits and vegetables, salads, meat and fish.

“I was seeing a lot of my senior vets in stores in April, May, June (and) July,” Mandelbaum said. “We realized they should not be in stores. They all had risk factors. So with the cooperation of a half-dozen volunteers – most of them in my post – and people active in Rock and Wrap It Up!, we reached out to Trader Joe’s and Costco, who I already had a relationship with.”

Both stores offered to donate food to the market, which had a pilot run in June. “It worked well, so we launched it July 1,” said Mandelbaum, a former U.S. Air Force Reserves medic. “We have now about 20 families that come Tuesday, Thursday and Saturday for an hour, hour and half, wearing masks, socially distanced, and they take what they need for the week.”

“Most of the group that comes are over 75,” Mandelbaum said. “I have three men who are Korean War vets: two in their late 80s and one 91. They’re not of need financially. I don’t know how much money they have or they don’t have. I don’t want them to be exposed to the virus.”

Alesia helps pick up donated items from Trader Joe’s and helps run and work at the market with other volunteers, one of whom is Mandelbaum’s wife Diane. A portion of the food from Trader Joe’s goes to the Veteran Farmers Market, while the remainder is taken immediately to the Five Towns Community Center to be available to those in need through the center’s Gammy’s Pantry, a community food bank. Any leftover food also is donated to the community center that same day.

“It’s complicated, but if it’s done correctly you can help a lot of people,” Alesia said. “And that’s what we’re in the business of: helping veterans and helping community members.

A member of American Legion Post 44 in Malverne, Alesia said what the Veteran Farmers Market has been able to do through a collaborative effort is “get a group of veterans who are over 70 years of age … out. It’s in Sid’s backyard, and they’re masked and social distancing, and they have an opportunity to shop without crowds of people around them.”

But Alesia said the market is providing another respite to the veterans during the pandemic. “They get out and have an opportunity to talk to people,” he said. “They’re (normally isolated), but they come out, they do their shopping, and they hang around a little bit and talk a little bit. I think it helps them in the long run. It’s really a nice experience.”

Rock and Wrap It Up! also has created the Andy Parise Veterans Toolkit to provide veterans with resources such as listing of best colleges for veterans and information on benefits. The toolkit is named for longtime Cedarhurst Mayor Andy Parise, a former Post 338 member and World War II veteran who was part of the force that liberated the Buchenwald concentration camp. Mandelbaum called the toolkit the “one-stop shop online for veterans.”

Mandelbaum makes it a point to regularly praise both the donors who contribute to his efforts and the volunteers who carry out the mission. He hopes to expand the program nationally and calls assisting veterans through both the market and the toolkit “a labor of love, obviously. And we’re going to keep doing it until the need changes. (The veterans) spent their lives giving back so much to so many, that we don’t want them in any kind of jeopardy. That’s why this is so important to us.”