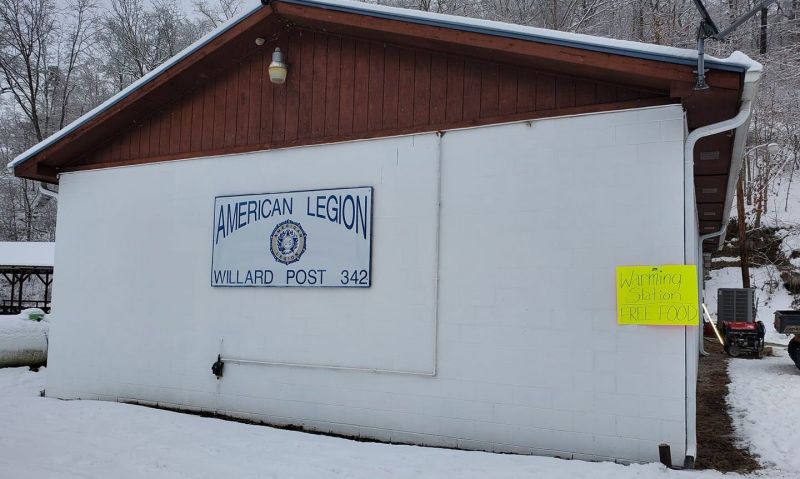 As a member of the Webbville Volunteer Fire Department, Legionnaire Richard Dallaire spent a long mid-February night helping move vehicles from out of the road and performing wellness checks after freezing rain and snow hit Eastern Kentucky multiple times. And when he got home, the commander of American Legion Post 342 in Willard, Ky., knew the need for assistance to residents of the community was far from over.

“He took a bath, woke back up and said ‘this is affecting too many people. We’ve got to do something,” said Whittney Dallaire, Richard’s wife and the treasurer for Auxiliary Unit 342, the first vice commander in her district and the department Education chairman. “He talked (with other members of the post’s Legion Family) and told them he wanted to open (Post 342) as a warming station.”

What started as a warming station morphed into much more for Post 342’s American Legion Family. For around two weeks the post opened its doors to members of the community impacted by the winter storm and the flooding that followed. Thousands of meals were served during that span, prepared by Legionnaires, Sons of The American Legion and Auxiliary members, as well as other community members.

Shortly after the decision was made to convert Post 342 to a warming station the Dallaires themselves lost power. Rather than running their own personal generator at their home, they took it to use at the post, where they stayed from Feb. 11 to Feb. 25.

Members of the community were at the post every day during that stretch, to stay warm and to get a hot meal. With communications hampered because of the power loss, the post relied on word of mouth to advertise what it was offering.

“People that were able to drive would stop by and be like ‘wait a minute. We didn’t know the Legion was open,’ because we’ve been closed (since November due to the pandemic)," Whittney said. “They helped us to spread the word.”

County and state officials helped get pallets of water delivered to Post 342, which in turn served as a distribution center for the region. “And we had countless neighbors and community members and church members and even our Legion Family members that would come in, load up their vehicles and drive up and down the hollows delivering water and meals, going to the pharmacy for people, just getting people what they needed.”

Once the phone and internet were restored, the post was able to share with a bigger audience what it was doing. “Before that … there were six of us staying overnight,” Whittney said. “Once we got communications back, we had other community members that were coming in and helping cook. We had people that were bringing in truckloads of food, drinks, to-go trays and general supplies that are needed to run a kitchen. It was amazing.”

The first few days, Whittney estimated the post was serving around 150 meals a day throughout breakfast, lunch and dinner. But once the word spread, that number grew to 300-600 dinners alone each night.

“We had community members that would call me and (say) ‘hey, I need this many.' They would go and deliver to all of the roads in their area,” Whittney said. “Richard was taking several boxes full of trays and taking them out there and delivering them, and there were two or three other people that were doing the same thing. And we opened it up to if you wanted to come in and get a to-go tray, you were more than welcome. But if you wanted to come in, sit down and get warm, play a game of pool or just sit and relax for a minute, we had that there as well.

“We have a couple awesome cooks in our membership. Once they heard about it, they were more than happy to come down. We’d spend sometimes eight, 10, 12 hours a day cooking and prepping and serving.”

The post also served meals to workers from utility companies and tree-trimming services. “I tried to have hot coffee on,” Whittney said. “And if someone came in and I didn’t have a meal ready, I’d heat them up leftovers or make them something."

It would have been easier for Post 342 to remain closed after the storms hit. But that never was really an option for its commander.

“My husband has a very big heart, and he thinks of other people more than he does himself,” Whittney said. “It would have been very easy for us to plug up the generator to our house and be perfectly cozy. But there would have been so many people that didn’t have that opportunity because there were no generators to buy. Or there was no propane to buy. Or there was a shortage of kerosene. It was one thing after another.

“It’s been a very humbling experience for our entire community to see how well everybody can pull together, no matter what your differences may be. We’ve been all along saying that community involvement is what it’s going to take to get people to want to be a member (of the post). In a time of need, that’s when we need to be there. We need to be showing what we are and what we stand for.”