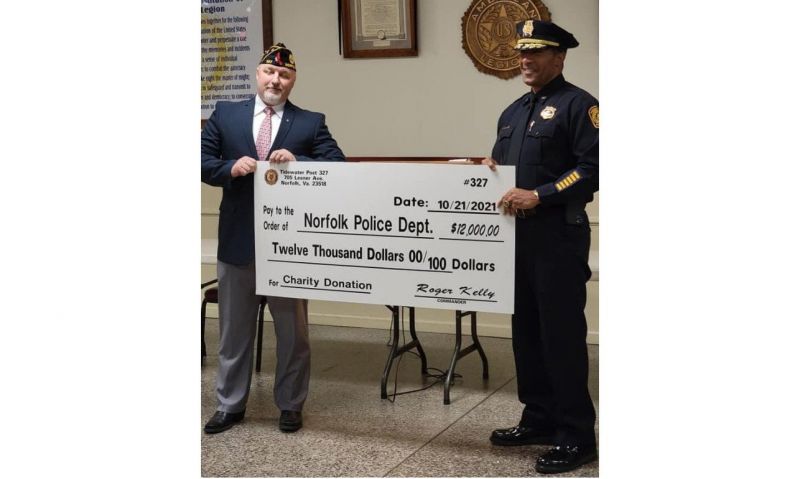 Chartered in 1946, Tidewater American Legion Post 327 in Norfolk, Va., has built a strong community presence, one that proves to be mutually beneficial for both the post and the city.

On Oct. 4, Post 327 Commander Roger Kelly presented the Norfolk County Sheriff’s Department with a donation of $12,000. Less than three weeks later, the post opened up its doors to members of the Norfolk Police Department, who also were presented with a check for $12,000.

“We started up with our blood drive program again. This year we’re doing four, and next year we already have six scheduled. And a decent amount of the people that donate blood are actually non-members. So when we do stuff, we get a lot of support from the community. So when we (make donations), it helps get our name out there to promote The American Legion.”

The post is able to make the donations through its charitable gambling operation, as well as through additional fundraising efforts. It’s the third year the post has made the donations to the two law-enforcement agencies, the first time donating around $10,000. “A need arose, and we were able to fill that need,” said Kelly.

The money donated to the Norfolk County Sheriff’s Department was divided evenly among three of the department’s programs: to train and hire veterans, a camp for troubled youth, and to provide armor vests that are otherwise only issued for personnel serving warrants.

The donations go “to spreading that Americanism from outside of the four walls of the post,” Kelly said. “We’re really trying to get to our community with that. And the whole law and order (aspect). And a big thing with a lot of this money is children and youth. A lot of their programs are directed toward youth. And also with getting veterans hired with the Sheriff’s Department.”

Making the donations is an opportunity to show support for the community, both Kelly and Glendinning said. And the blood donation drives and other events at the post have an additional benefit.

“Every time we host an event at the post, whether it’s for Toys for Tots or the blood drives, whatever we do, we always have a membership table,” Glendinning said. “For people that don’t really know what we do, they can come to our membership table and ask questions, and potentially (join the American Legion Family). They’re not necessarily a veteran, but they’re a son or daughter of a veteran, or married to a veteran. And that’s a big thing.”