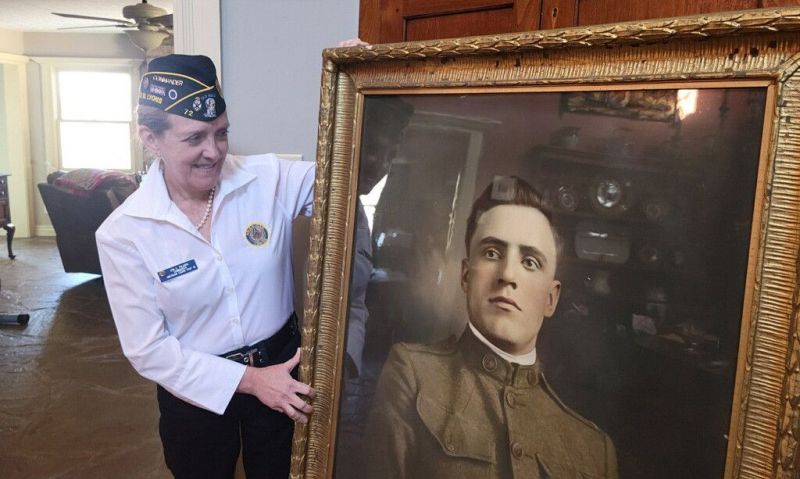 Lisa Polarek already had a deep commitment to her work as the commander of American Legion Post 72 in Dover, Tenn., because of what she feels the organization represents.

But that commitment is even stronger because for her, being a member of Post 72 carries a responsibility to live up to the service of its namesake, Douglas Milford Lyons, who died in combat during World War I – and happens to be Polarek’s cousin twice-removed.

Polarek, who retired from the U.S. Air Force, knew Lyons was a relative but said she didn’t have time to join Post 72 while still raising children. She joined around four years ago, but her relationship to Lyons didn’t become general knowledge until after she was asked to serve as post commander.

“I took some time to think about it because one, it means a lot to me to do what we do,” she said. “And it just took on more of a personal meaning to me because I wanted to do the best for our post and our veterans, but also, because I did have that relation to (Lyons).”

Polarek said she may had said something about being related to Lyons in passing to Post 72 Adjutant Don Bailey years ago, but no one at the post really found out until after she was elected commander.

“It wasn’t like I was ashamed of it. I’m very honored (to be related to Lyons),” she said. “I just wanted to make sure I was prepared to do this and do the best job I possibly can.”

Lyons was killed in Verdun, France, on Oct. 12, 1918. He was awarded the Distinguished Service Cross posthumously for his actions while serving in the 114th Infantry Regiment, 29th Division, A.E.F. He was cited for “extraordinary heroism” while leading an attack against a strongly fortified enemy position, costing him his life.

But Polarek said Lyons’ legacy was defined by more than the day of his death. “He had a higher moral standard,” she said. “If you read letters he wrote to his parents, he wanted to conduct himself in a way that was honorable. He wanted to be a great leader.”

And living up to that legacy matters to Polarek. “Being from a small town, I grew up with the understanding that your family name meant everything,” she said. “You have to respect that, and you have to do your part to not cause any kind of negativity toward that. It was always important to me. It’s my upbringing and pride in my family. You think about that, about the actions you take.

“When I’m no longer (Post 72) commander… I want it said that I tried to do the very best I could, and it meant a lot to me. The things we do for veterans, I feel Douglas Milford Lyons would have wanted this.”