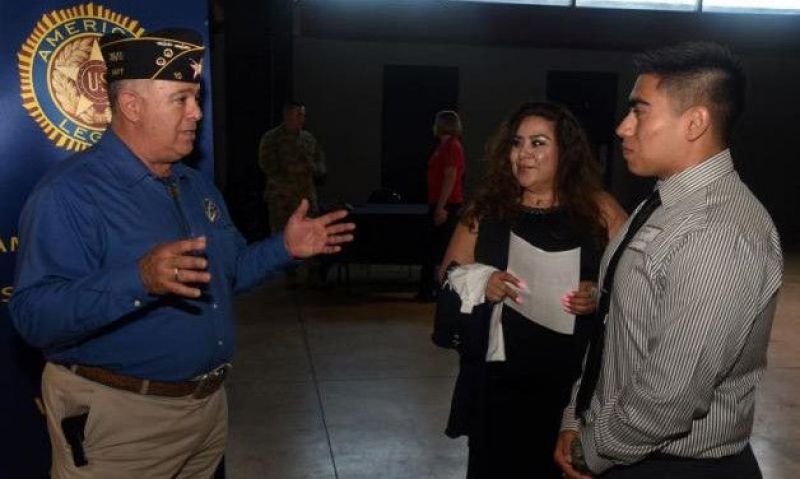 American Legion Department of Texas District 20 members were part of a special celebration that recognized 230 high school graduating seniors who are enlisting in the U.S. military. The 11th annual “A Night in Your Honor” was hosted by Our Community Salutes San Antonio at Pedrotti’s Ranch in Helotes, Texas, May 18. The American Legion was there to provide the future servicemembers, and their parents and/or guardians, with information about how The American Legion can be of support and service to them.

“We had a great time speaking with the young men and women and giving them information about what The American Legion is and letting them know that when they come back on leave from boot camp that they can join their local post,” said Burrell Parmer, commander of Fred Brock American Legion Post 828 in San Antonio. “We let (the families) know that your son or your daughter is entering another family. And with The American Legion, you can be a part of this family too. That’s the kind of information we wanted to pass to all attendees.”

Our Community Salutes San Antonio is a nonprofit created in 2012 to recognize and honor high school seniors who plan to enlist in the military after high school graduation. During the recognition ceremony, they have a community resource fair that connects the future servicemembers and their families with military support groups. This was the first year that The American Legion participated. The idea to be a part of the event was introduced to District 20 by Parmer, a retired Marine who has been involved with “A Night in Your Honor” since it started.

“I brought it up that this is something that The American Legion needs to be a part of. We have an opportunity to be face-to-face with not just the future servicemember but also their parents,” he said.

Parmer said some of the family members were veterans and didn’t know they were eligible for Legion membership or the resources that The American Legion provides.

“It was good to have the visibility for people to come up and ask us those kinds of questions,” he said. “I think it’s important for the families to know that we care. It’s not just about recruiting but letting them know that you’re part of a family. You can be a part of an extended family, The American Legion. We told some of the parents that wherever your son or daughter go, across this world and overseas, you can find an American Legion post. If you’re a member that’s your home. So you’ll always have a home away from wherever you go.”

The graduating seniors recognized during the “Night in Your Honor” represent high schools in Bexar County and the surrounding area. They enjoyed a dinner and received a “Thank you for your service” certificate, a challenge coin, a stole of their respective branch of service and a gift bag. They also had the opportunity to shake hands with senior leaders from their military branch of service and hear from keynote speaker U.S. Air Force Maj. Gen. Tom Wilcox.

“It’s a great program,” Parmer said. “These people are special. They are part of the one percent of Americans that want to come into the military and serve so we should recognize them.”