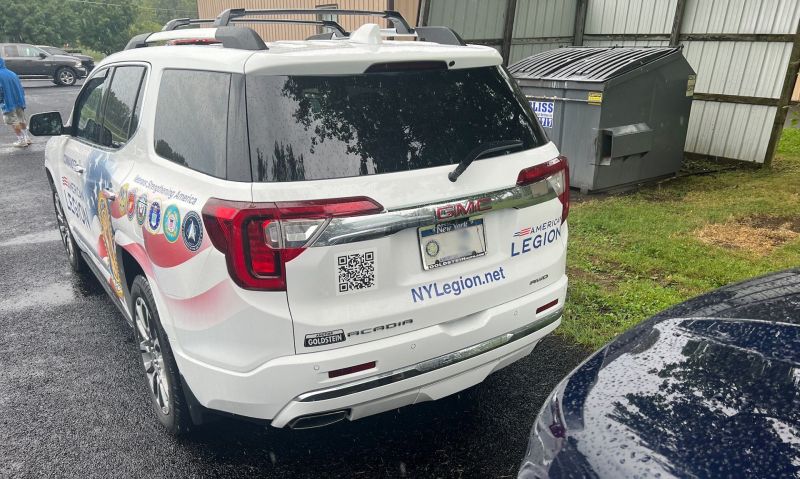 When 2022-23 American Legion Department of New York Commander Dave Riley had his personal vehicle wrapped with the Legion emblem, brandmark and six branches of service to include Space Force, Riley added an additional feature – a membership QR code.

The membership QR code is on the back of his vehicle. When someone scans it, they are taken to the Department of New York’s join page.

“All the younger veterans, everything is by their phones,” Riley said. “They are going to scan it just to see what it is. It’s the curiosity. Now, they can just scan the back of my car and join.”

No verbiage such as “Join now!” appears on the QR code. Riley did that for a reason.

When veterans “see The American Legion vehicle (QR code), I wanted them to be curious to scan it. I wanted the curiosity of the QR code to get them to scan it and see what it was. They are going to scan it just to see what it is. They scan everything for the information.”

The QR code was created at no cost by Department of New York Media and Communications Chairman Bob Stronach, who made it black and white so it can be sized to fit on a variety of membership marketing tools – email, pamphlets and business cards. Riley currently has the Legion application on the back of his business card but is looking forward to having the membership QR code there one day.

“The QR code is a lot easier and more efficient,” Riley said. “They can fill out an application online while you’re talking to them.” Once veterans are directed to the join page through the QR code, “they can put their credit card in right then and there. I don’t have to worry about (asking for or handling) any money. They can join then and there.”  Once a new member joins, they are placed in the department’s holding post.

Riley said holding post members will be contacted for renewal purposes and to place them in a local post.

“Only time will tell to see what we get from membership off of it,” Riley said. “If I get one person to sign up through the QR code, I’m 100 percent ahead of myself. It’s just another membership tool in the toolbox.”