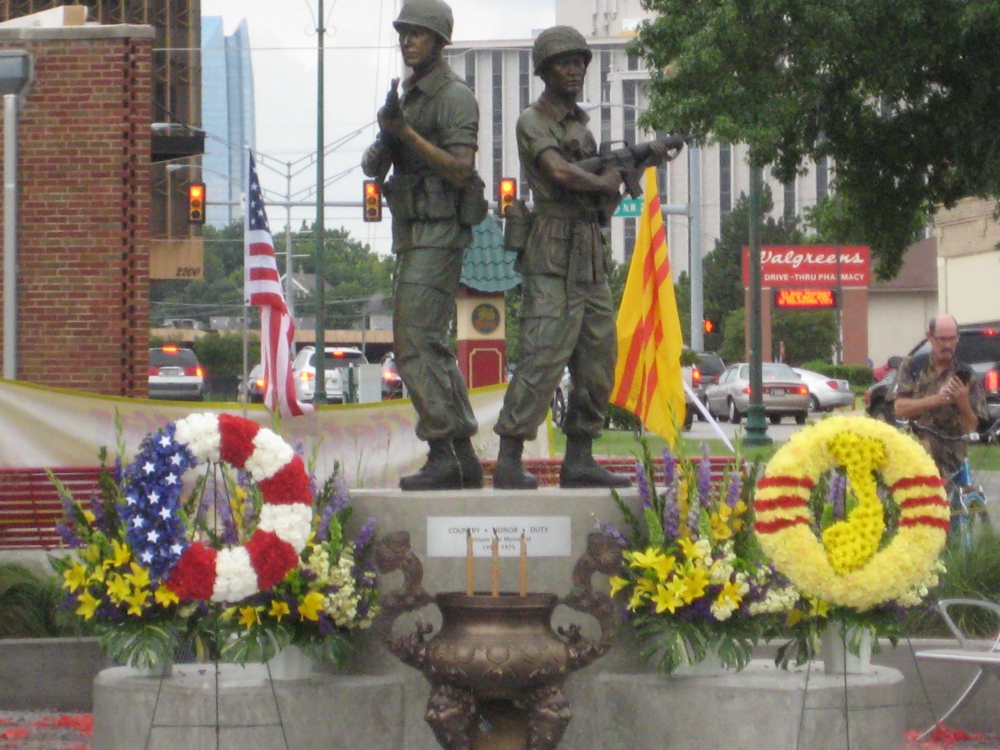 The Monument is a bronze statue depicting an armed American and South Vietnamese soldier, standing back-to-back, in combat uniform, and representing the unity of brother warriors in battle. It is the centerpiece on the Plaza of Flags, and rests on a raised concrete pedestal base, surrounded by flowers, wreathes, and a large ceremonial urn. Etched on the base is: COUNTRY HONOR DUTY Vietnam War Memorial 1955- 1975 The Monument is the work of Thomas Jay Warren, and the vision of Vinh Nguyen, the Chairperson of the Oklahoma City Vietnamese-American Community. Mr. Nguyen served as a Lieutenant Colonel in the South Vietnamese Army during the war, and led a fundraising campaign to raise $250,000 for the Monument and flag plaza. In 2014, the OKC City Council passed a resolution supporting a memorial at Military Park. The Monument was installed on July 6, 2017 and a dedication ceremony was held on July 8, 2017. The public unveiling ceremony featured a presentation of the U.S and South Vietnam Flags, a live performance of the National Anthem, and other patriotic and Vietnamese music. Following remarks by the Chairman of the Vietnam War Memorial Committee, the Sculpture was unveiled and an official ribbon-cutting ceremony, laying of ceremonial wreaths, and incense-burning ritual took place. A spirited Dragon Dance, complete with fireworks, introduced a unique and colorful aspect of the Vietnamese culture. The official transfer of the Memorial to Mayor Mick Cornett, and the City of Oklahoma City was followed by remarks by the Mayor, Vietnamese-American leaders, local government, civic, and religious officials, a representative of the Vietnam Veterans of America organization, and the youth of the Vietnamese-American community. Many of the South Vietnamese veterans of the war wore their war service uniforms, and many of the ladies wore traditional Ao Dai apparel. The Monument is dedicated to the memory of American and South Vietnamese military personnel who served and died during the Vietnam War. It is a tribute to the sacrifices of the some 3.4 million Americans who served in Southeast Asia between 1965-1975, and most particularly to the over 58,200 military personnel who died, including some 989 Oklahoma veterans, and the over 153,300 wounded and hospitalized, during the War. It is equally a tribute to the sacrifices of some 254,000 Army of the Republic of Vietnam (ARVN) who were killed, and the estimated 355,000 South Vietnamese civilians who were killed in a two-decade conflict against the North Vietnamese communist regime and insurgent communist forces in South Vietnam. The South Vietnamese military and civilian populations were in a struggle for their freedom a decade before the entry of the United States into the War.

City of Oklahoma City (OKC), OK. Responsible for establishment of the Memorial were: Mr. Vinh Nguyen, representing the Vietnamese-American Community of the OKC Metropolitan area , and the OKC Office of Arts and Cultural Affairs, and the OKC City Council. 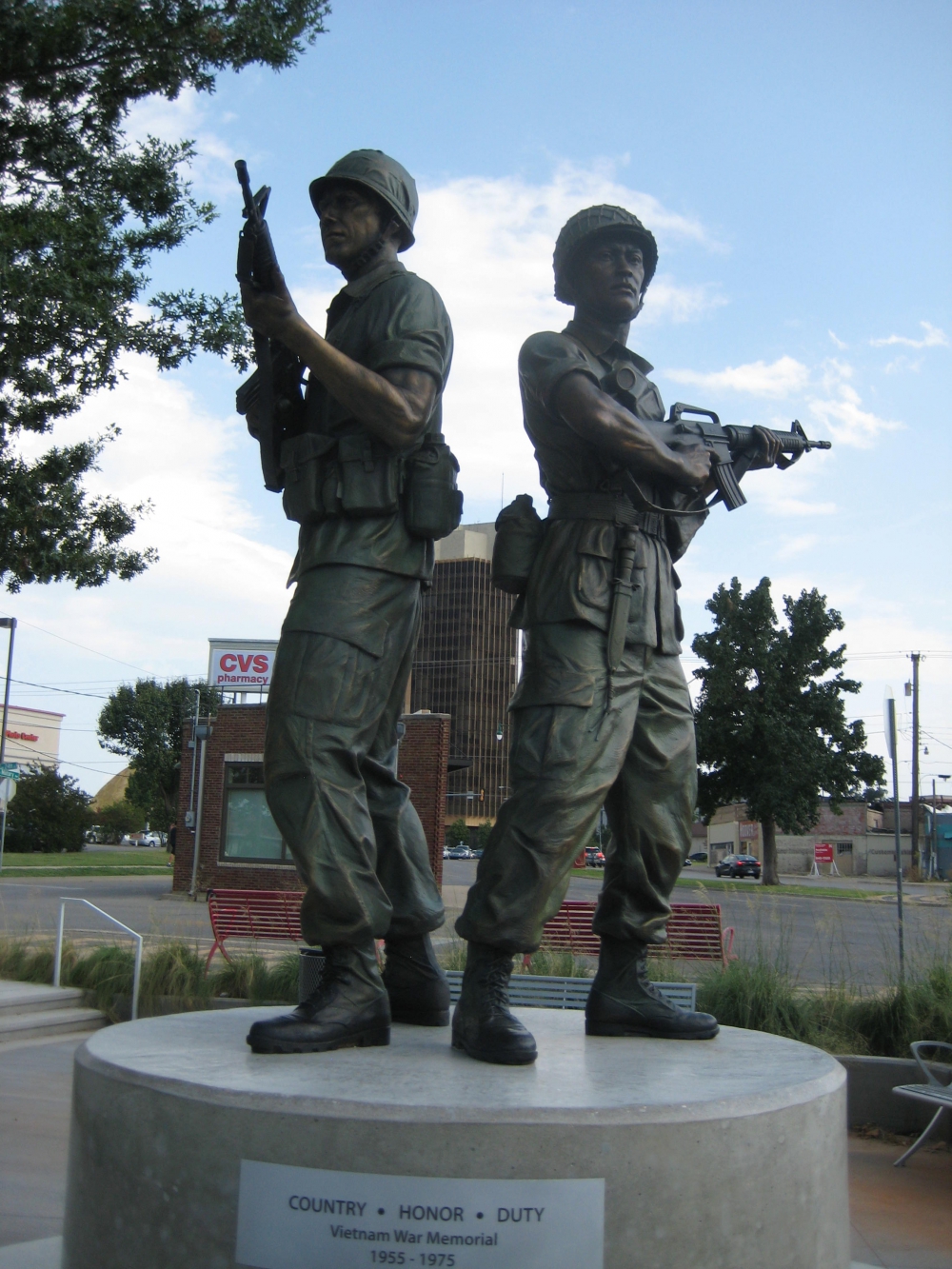 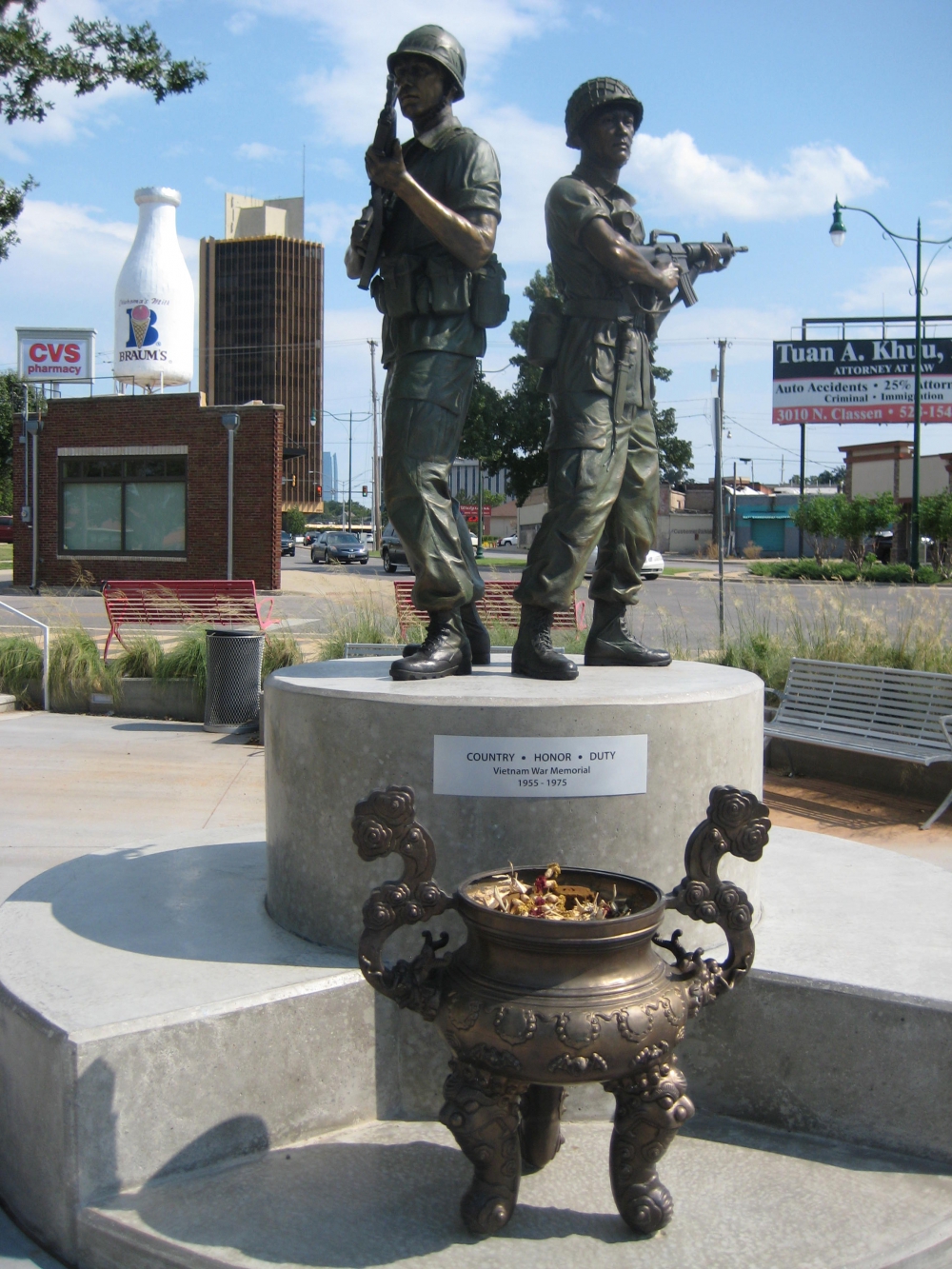 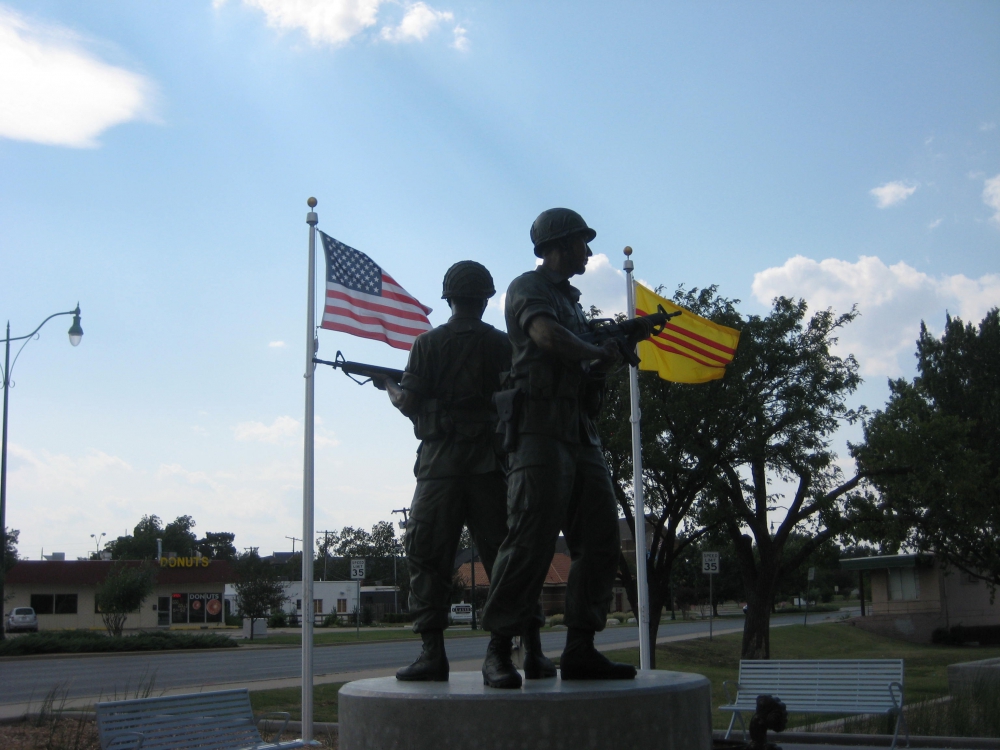 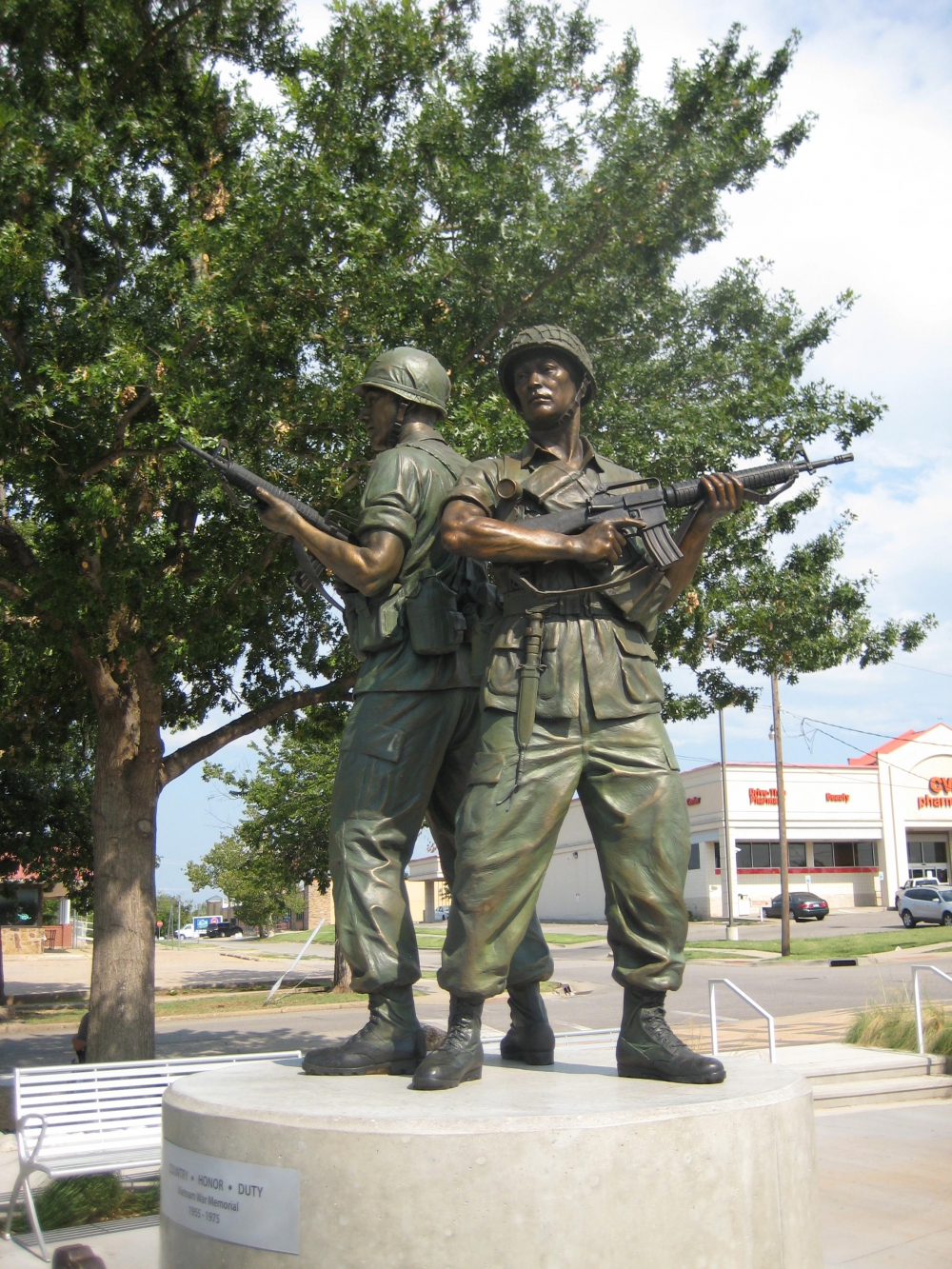 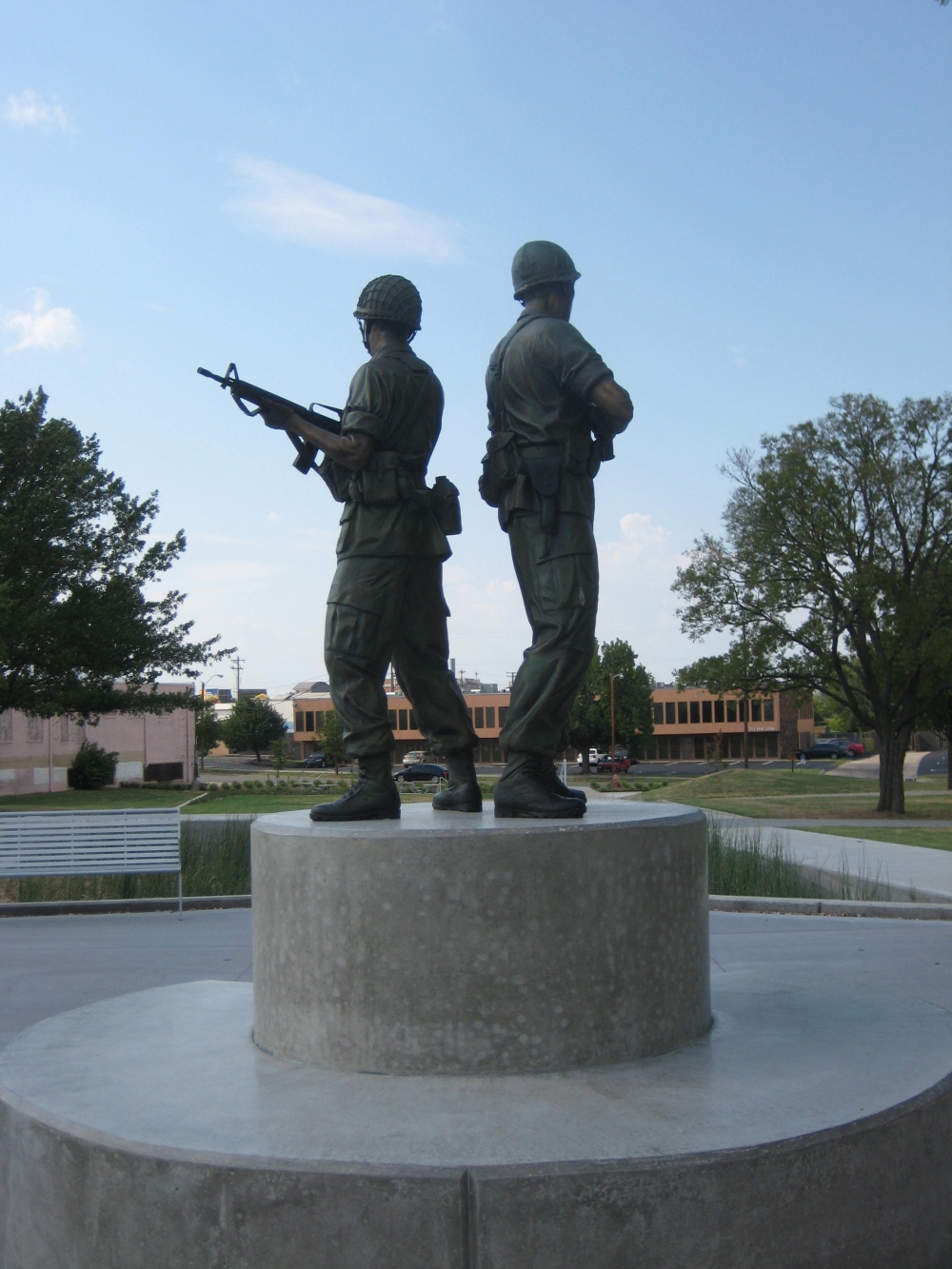 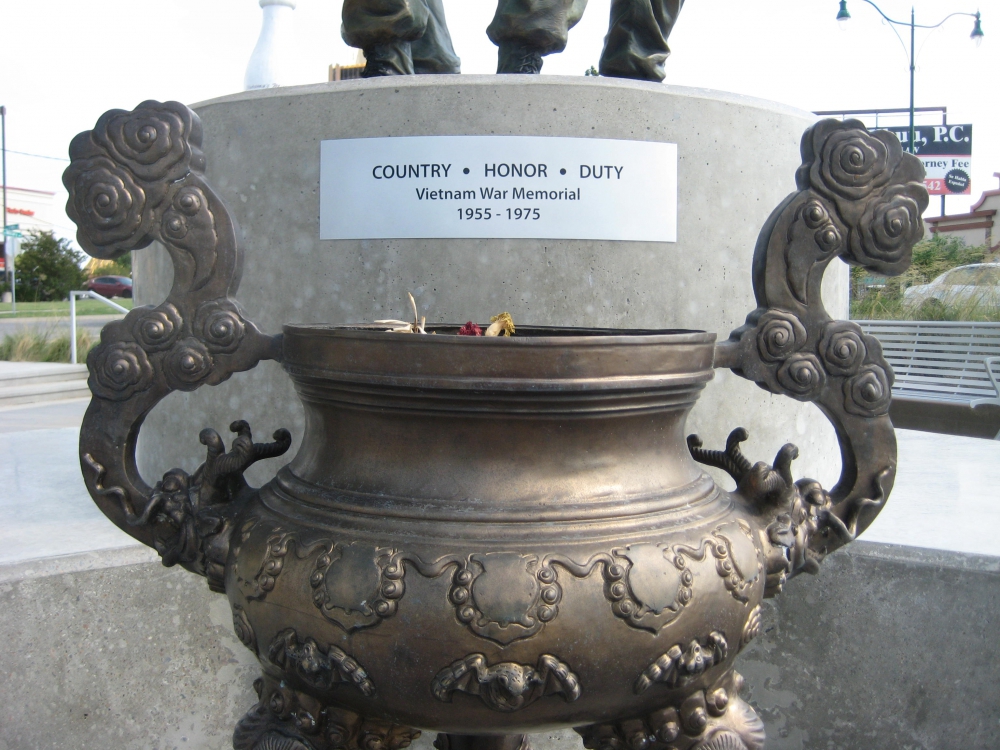 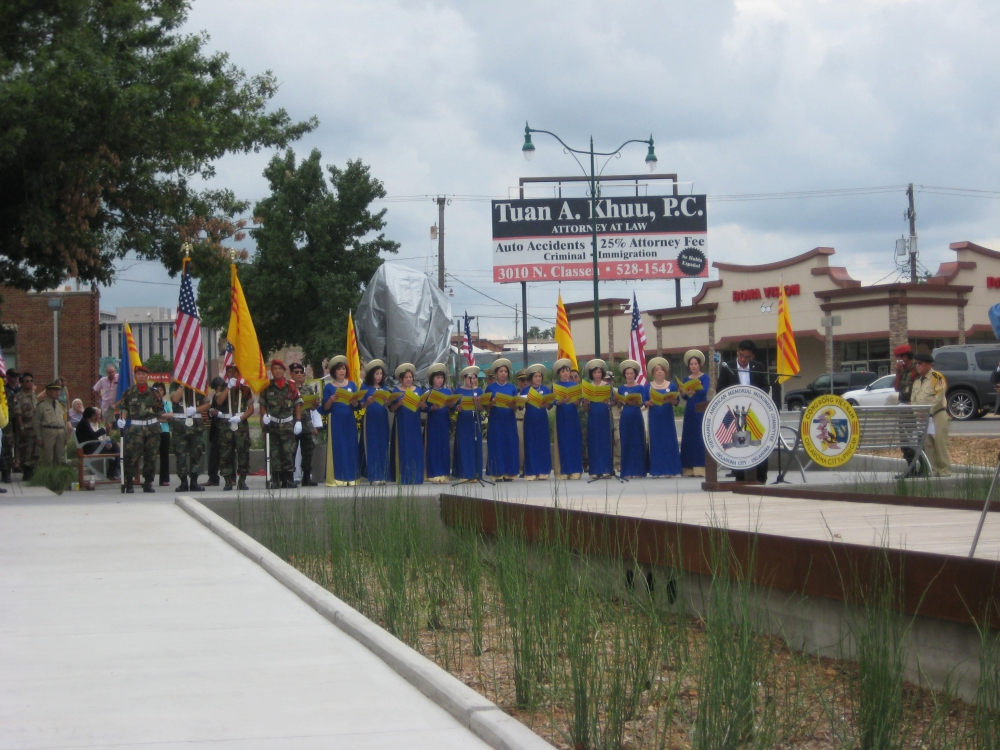 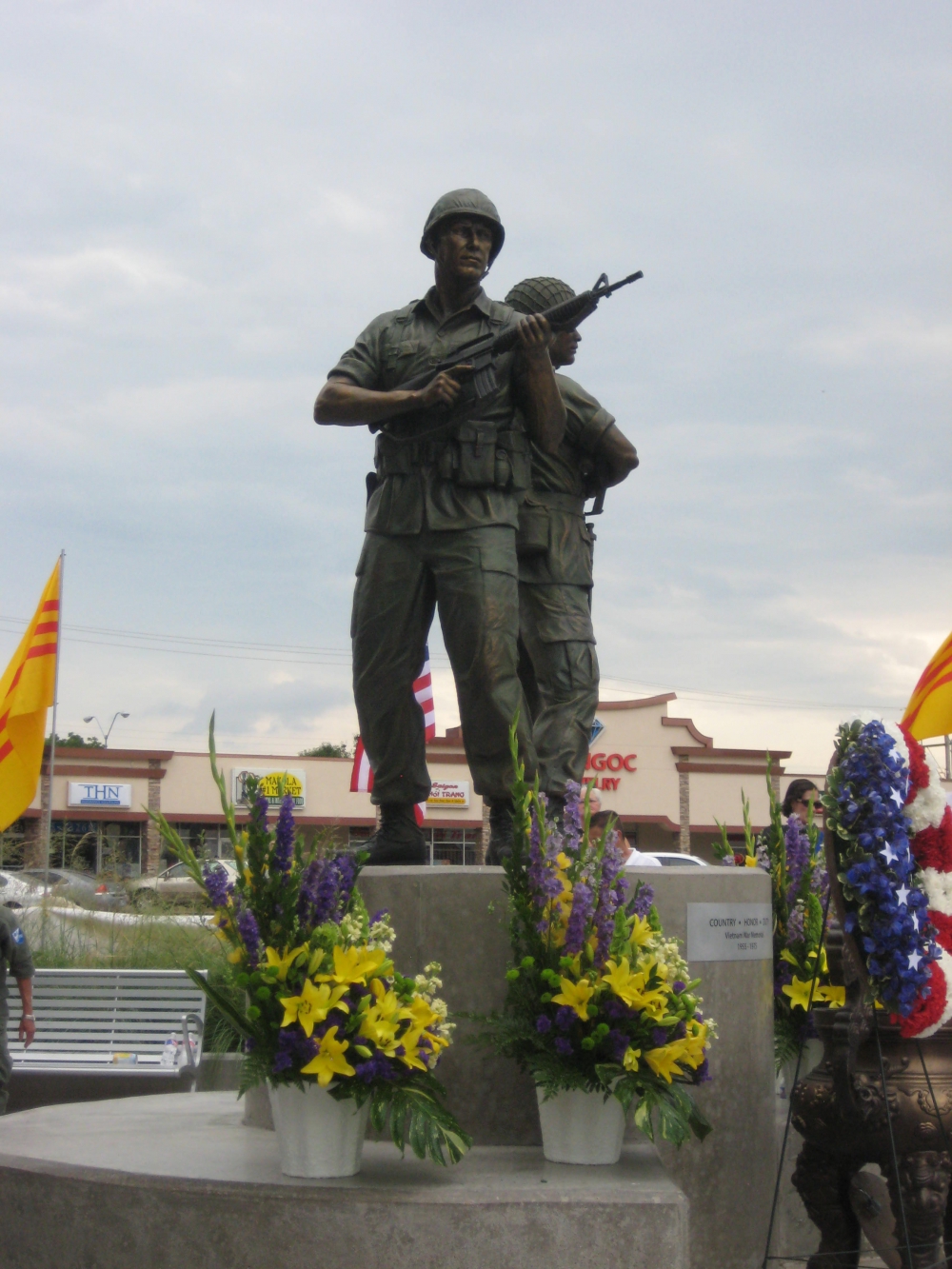 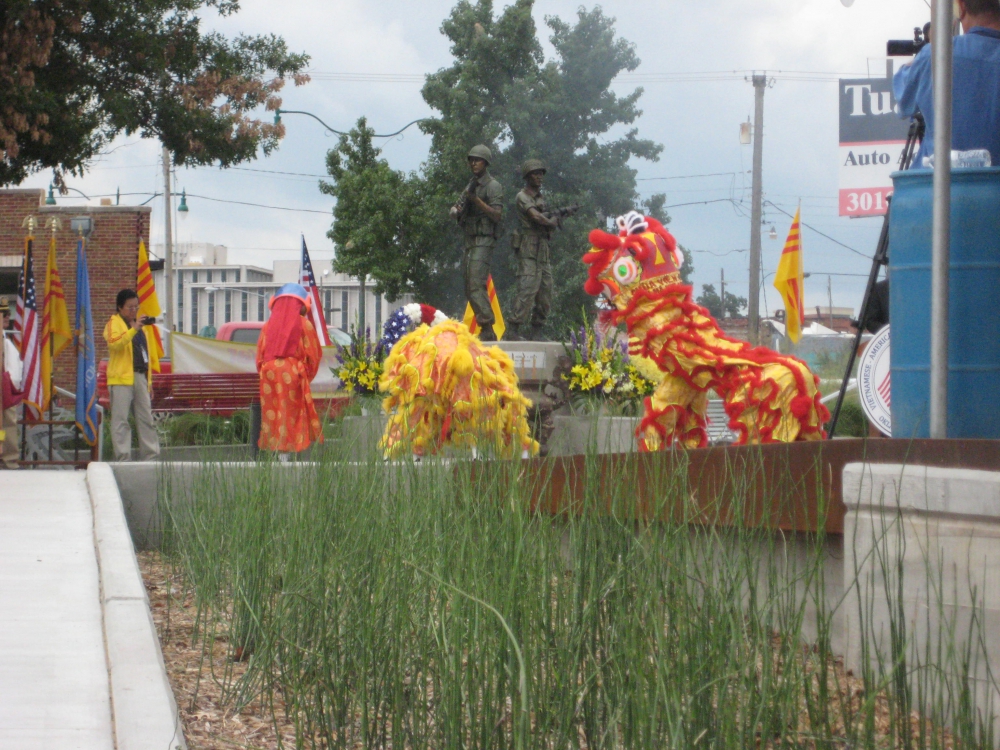