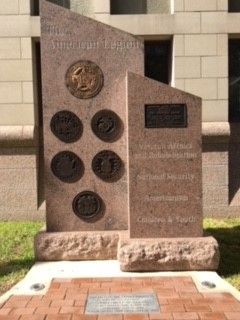 On July 14, 2018 the Department of Texas dedicated a new American Legion monument downtown San Antonio, Texas on Dolorosa Street (Military Plaza) next to the Cadena-Reeves Justice Center. The monument honors those who have served in our great organization. We, the men and women who now serve the Legion, are the stewards of that great tradition of service. We have a responsibility to carry forward the principles upon which the Legion was founded. The monument features the seals from each of the Armed Services. In addition, the “Four Pillars” of the American Legion was etched in the granite monument. A 50-year Time Capsule was buried at the base of the monument containing items donated by posts from all over Texas. The time capsule will be excavated by legionnaires and the contents revealed in 2068. Perhaps most importantly, two original bronze plaques from an original monument dedicated in 1931 as part of a marker on the original American Legion Highway. The project officers had the plaques refurbished and incorporated in the new monument. San Antonio was chosen for the monument site because the city was original location for the marker in 1931 denoting the American Legion Highway and it is trademarked as "Military City USA".