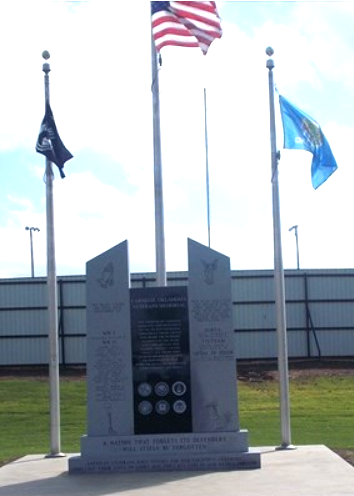 Memorial is located west of Carnegie, Oklahoma on Highway 9. This beautiful gray granite and black granite war memorial was dedicated by the citizens of Carnegie. Three flag poles with the USA flag in the center and the Oklahoma and POW/MIA flag on either side. The left vertical gray granite slab has engraved praying hands at the top followed by the text: "We were young. We have died. Remember us." Following the text is a listing of World War I and World War II veterans. In the center vertical black granite slab is the following text: Carnegie, Oklahoma Veterans Memorial The citizens of Carnegie Deducate this monument To all of our veterans. Especially those listed Who made the supreme Sacrifice in the wars And conflicts of our Nation. And let us not Forget all those who Remain missing in action Or prisoners of war. Forever shall we remember Their courage and spirit. Below the text are the seals of the Military Service. The right vertical gray granite slab has engraved an angle at the top followed by the text: "Our flag does not fly because the wind moves it. It flies with the last breath of each soldier who died protecting it." Following the text is listed "Korea, Vietnam veterans and Jack Montgomery Medal of Honor recipient." The bottom of the monument on two layers has the words: "A nation that forgets its defenders will itself be forgotten. America's veterans have fought for our country's freedoms. Some lost their lives or limbs. May they all live in our hearts forever." 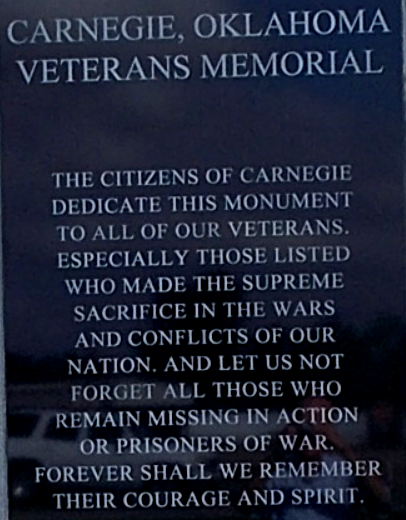 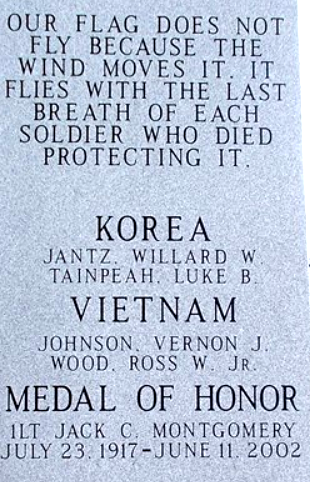