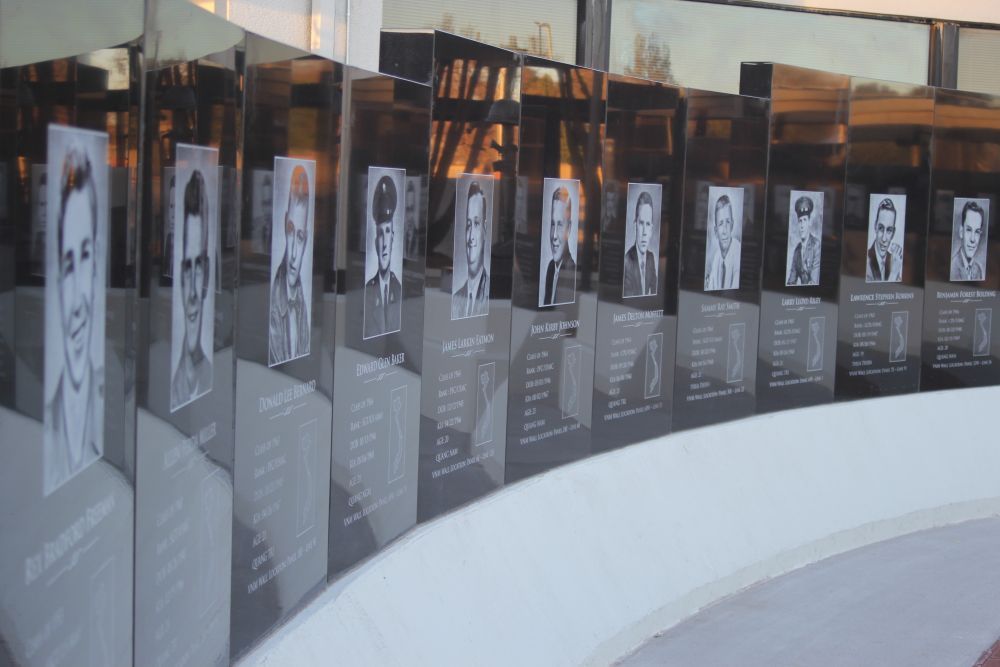 In 2018, alumni and friends of Midwest City High School, Midwest City, Oklahoma, home of the Bombers, raised $250,000 to establish the MCHS Vietnam Memorial & Bomber Plaza as a lasting tribute to the sacrifice of the 22 classmates killed in action in the Vietnam War (1959-1975). The war memorial is large, occupying 8,000 square feet on a main area of the campus, and it has been hailed as “the first of its kind” among American high schools for the personalized granite panels depicting photos and detailed military information concerning the hometown heroes. WALL OF HONOR: The 22 young men from Midwest City High School are pictured and memorialized on upright black granite slabs, ranging up to eight feet tall, along a wall of honor. Much detail is offered about date and place of death, the former student’s age, rank, and branch of service, and where, on the national Vietnam Wall in Washington, D.C., the soldier’s name may be found. On the back of the first panel is an etching of Vietnam with stars in provinces in which Midwest City High School students died in battle. A five-foot symbolic soldier’s cross in bronze with boots, helmet, and weapon, stands mid-wall. Facing the wall, an honor podium of concrete supports a granite inscription of the architect’s memorial statement: “Until we are in the battle risking our lives we can never understand the sacrifice of a soldier. These brave graduates and former students of MCHS made the ultimate sacrifice and we honor their memory, their heroism, and their commitment to country.” At the foot of the wall, uniformed services veterans from the local community and elsewhere are honored through the purchase of inscription bricks. The architect was Tony L. Callaway, MCHS Class of 1964, who served a tour of duty in Vietnam with the U.S. Army and returned to become an accomplished architect in Dallas. Bob Osmond, Class of 1964, chaired the Vietnam Memorial Committee, which came to be made up of 18 graduates from the classes of 1961-1970. The Class of 1964 originated the project at its 50th reunion in 2014. BOMBER PLAZA: Opposite the Wall of Honor in the encompassing circular plaza is the four-foot high concrete Honor Roll Wall. It holds space for 16 special recognition plaques for honorees of future military or civilian events, at the school’s discretion. At the time of the dedication, picture-plaques saluted the former MCHS student killed in action in Iraq in 2006, and the three former Midwest City students killed in the Oklahoma City Murrah Building bombing of 1995. At the base of the Honor Roll Wall are inscripted bricks placed by alumni and friends of Midwest City High School. VISITORS: An estimated 1,1,00 community members attended the dedication of Midwest City High School (MCHS) Vietnam Memorial & Bomber Plaza on Veteran’s Day, November 11, 2018. Located at 213 Elm St., Midwest City, Oklahoma, the site is open daily and lighted at night. Bomber Plaza has custom benches, and visitors will be impressed by the significance of the benches’ sayings and symbols to those who have ever called Midwest City home or worked as military or civilian employees of Tinker Air Force Base. City, Base, and School opened together in wartime 1942-43. Behind the memorial is the Midwest City High School History Center. MCHS is that rare high school that preserves its class histories and honors its war casualties. REDEDICATION: On Veterans Day, November 11, 2020, Air Force Colonel (Retired) Charles DeBellevue, the Vietnam War’s top air ace, who resides in nearby Edmond, Oklahoma, made keynote remarks and unveiled newly-installed informational panels at the MCHS Vietnam Memorial & Bomber Plaza. Other honored speakers were Midwest City Mayor Matt Dukes, State Senator Brenda Stanley, and Midwest City High School Acting Principal Leslie Berger. One of the panels shows the location of the dozen elements of the memorial, explains the military symbolism, and offers questions and activities for students to learn more about their military community and service to country. The second panel contains photos and history of the period 2014-2018 when the memorial was planned and constructed, in large part by MCHS Vietnam veterans determined to prominently honor their own war dead. The panel further explores the meaning and legacy of the Vietnam War for those who served in that period but whose recognition for service was long-delayed. Background articles: https://seniornewsandliving.com/wp-content/uploads/2020/11/snl-exported-november-2020-r.pdf (“Top Vietnam Air Ace Headlines Midwest City Veterans Day Event”) https://seniornewsandliving.com/031215/mchs-memorializes-students/ https://www.centraloklahomaweeklies.com/2018/03/16/midwest-city-memorial-hospital-authority-awards-community-grants/ https://www.centraloklahomaweeklies.com/2018/03/02/city-officials-back-vietnam-memorial/ https://www.centraloklahomaweeklies.com/2018/09/21/alumni-break-ground-on-memorial/ https://www.centraloklahomaweeklies.com/2018/09/17/construction-starting-soon-on-mchs-vietnam-memorial/ https://bombervietnammemorial.org/mchs-wall-of-fame-1 (“History of MCHS Vietnam Memorial on Occasion of Osmond Wall of Fame Induction”) http://classreport.org/usa/ok/midwest_city/mchs/1964/691775Museum3.pdf (“Class of 1964 Recognizing Museum Curator and Mid-Del Legends Rose, Sutton”) http://classreport.org/usa/ok/midwest_city/mchs/1964/691775Museum2.pdf (“What’s Inside - Who’s Behind – MCHS Museum”)