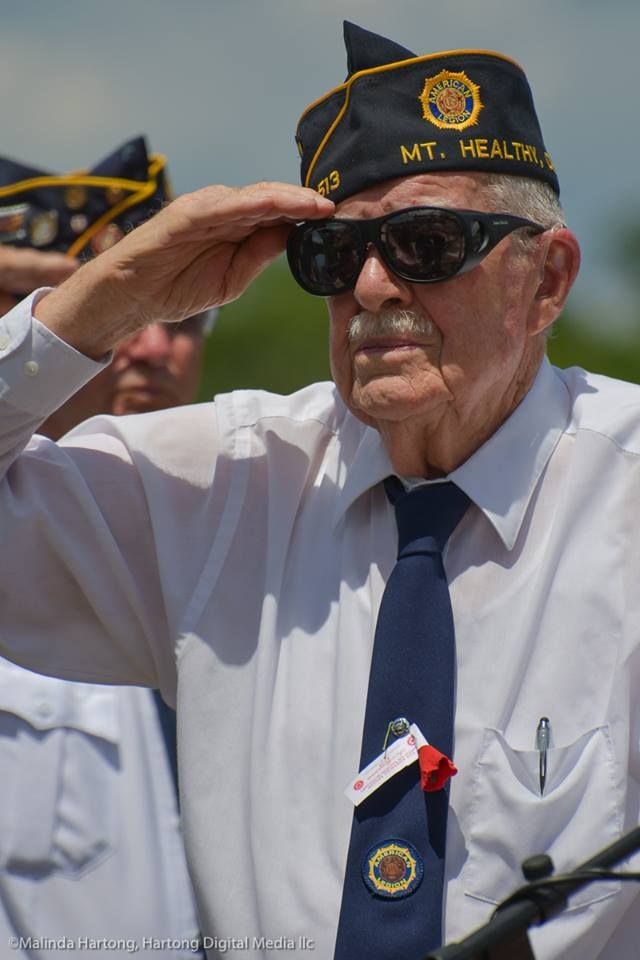 BLUM, Vierling A., age 97, of Mt. Healthy, OH, passed away on Friday, June 7, 2019. He was born on November 26, 1921, to Henry and Edmunda (Vierling) Blum in Mt. Healthy. He is survived by three daughters: Mary DeSalvo of Ft. Wright, KY, Anne (Jim) Kreider of Sugarcreek Township, OH, and Betsy (Dan) Pelzel of Loveland, OH; one son, Bill (Sue) of Griffin, GA; 3 granddaughters, Leah Pelzel (Ethan) Nash of Indianapolis, Libby Pelzel of Loveland and Grace Kreider of Sugarcreek Township; one grandson, Alex Kreider (fiancée Mary) of Centerville, OH; sister-in-law Francis (Morrow) Schneider of Champaign, IL; and numerous nieces, nephews and cousins. Vierling is preceded in death by his beloved wife of 66 years, Marian, his son-in-law Frank DeSalvo, his parents, his parents-in-law (George and Philomena Schneider of Cincinnati, his brother-in-law Jack Schneider, and his sister-in-law and brother-in-law Virginia and Charles Herweh.
Vierling graduated from Mt. Healthy High School in 1939 and was an active member of the band, later playing in the Alumni Band as well. After high school, he worked at Wright Aeronautical until he declined his draft deferral in 1943 and joined the US Army. Vierling proudly served in WWII in Europe.
Vierling was an active member of Wesley Werner Post 513 of The American Legion in Mt. Healthy, serving as post adjutant for over 20 years. Other Legion activities include: formed Drum and Bugle Corps and directed for 3 years; organized numerous parades, including the joint Mt. Healthy/North College Hill 1976 Bicentennial Celebration; grand marshal for Veterans Day parade in 2013; emceed various Memorial Day ceremonies, including in 2018 at the age of 96. Vierling played in the Mt. Healthy Booster Band during the 1930s and as a volunteer in the Army-Navy Band and the Norwood Civic Association for five years. He was a member of the Colerain-Springfield Protective Association auxiliary police group for 5 years, serving as president for 1 year, and helped organize the Mt. Healthy Life Squad. He and his wife volunteered in the Hamilton County Park System for 15 years and gave frequent talks to school groups about WWII. Vierling was a member of the Mt. Healthy Historical Society since 1980 and served as treasurer for numerous years. He served on the Civil Service Commission in Mt. Healthy for nine years and was a board member for the North College Hill Seniors and acted as a volunteer general handy-man at the senior center.
Vierling was an active member of Assumption Parish as a eucharistic minister and usher, a Boy Scout leader, and a volunteer on various committees. He continued his ushering duties as a member of the Catholic community of Evergreen Retirement Center. He served as member and president of the Evergreen Retirement Community Residents Council for numerous years, and was the safety/security liaison for the residents.
In lieu of flowers, the family requests donations to Assumption Church or the Mt.Healthy Historical Society. Further information can be found at www.neidhardyoungfuneralhome.com.