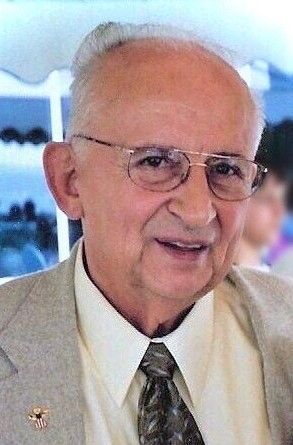 Chester Francis Marciniak
Oct. 5, 1930 – May 15, 2020
Chester Francis Marciniak, 89, passed away on Friday, May 15, 2020, at his home in Woodbridge, Va. He was born at the family home on South Ellwood Avenue in the Canton section of Baltimore on Oct. 5, 1930, to the late John and Sophia Marciniak.
Chester grew up in Baltimore, attending grade and high schools there, and later entered the U.S. Naval Training Center at Bainbridge, Md., where he honorably served stateside during the Korean War. Afterwards, he went to work for the Baltimore Sun and later the Washington Post, where he spent his career as a printer and later composing room foreman. He was proud of his work and often brought his family in to see how newspapers were printed. After retirement, Chester established a successful wallpaper business and was selected for a team to wallpaper select areas of Washington Union Station during its storied redevelopment.
Chester was active in his community and a proud member of American Legion Post 364 in Woodbridge, the Moose Club and served as the former president of the Polish Club of Woodbridge, a chapter of the Polish National Alliance. He was also very active in his local church, Saint Elizabeth Ann Seton, in Lake Ridge, Va., highlighted by his participation in their Legion of Mary Prayer Group.
Chester was a one-of-a-kind, lighthearted person, full of fun and bad jokes. Life never seemed to get him down. He will be remembered for his quick wit, happy demeanor and love of family. His many “Chesterisms” and ability to socialize with practically anyone were his unique superpowers and made him a very lovable and all-around fun person to be with. He was a big-hearted and compassionate person, providing help to many people less fortunate than himself.
He is survived by a large and loving family including his wife Elayne, of Woodbridge, to whom he was married for nearly 45 years. He had six children – the late Steven Marciniak (Darlene) of Chesapeake, Va., the late Linda McInnes, Deborah Hare (Russel) of Downers Grove, Ill., Diana Cox of Arnold, Md., Robert Marciniak (Ellen) of Lumberton, N.C., and Michael Marciniak (Julie) of Durham, N.C. He was further blessed with seven grandchildren (Brian Marciniak, Amanda Farnham, Jason Marciniak, Stephanie Cox, Alison Hare, Joshua Blake and Michaela Marciniak) and five great-grandchildren (Taylor and Ashleigh Marciniak and Aaron, Andrew and Alec Farnham). He is also survived by his brother Raymond Marciniak, sister Mary Dolores Luberecki (Eugene) and brother Gregory Marciniak (Janet). He was predeceased by his brother Casmir Marciniak, sister Martha Charlotte Pruce and sister-in-law Lois Marciniak.
He will be loved and missed by all who knew him and his eternal search for a blue-eyed blonde has now entered its next phase.
While COVID-19 will not permit his family to provide the Catholic funeral services he wanted at this time, they are making plans for a Celebration of Life Mass in his honor at a later date.