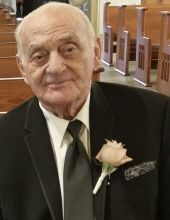 Paul Frank Tozzi passed away on Jan. 2, 2021. He was born in New York City on July 21, 1931, to Giosafatte & Assunta Tozzi. He was raised in Little Italy along with his 11 siblings. Paul attended Transfiguration School and Seward Park High School. He served his country and was an Army veteran of the Korean War. Paul had a successful career as a manager for architectural firms in New York City and the New York Academy of Sciences.
He married Margherita (Margie) DiPilato in 1955 and celebrated 65 years of marriage. He is survived by his three daughters - Susan Maseda and Ed, Toni Ann Tuosto and Christopher, and Lucille Catanzaro and Emile. He is lovingly remembered by his grandchildren - Steven and Kat Maseda, Victoria Maseda and Brian Strauss, Joseph and Gianna Tuosto, Kristina and Dane Schroeder, Paul Catanzaro and Sabrina Brown, and Megan and Christopher Goscinski. He was also blessed with six great-grandchildren - Teresa Maseda, Sofia, Claire and Lucas Schroeder, and Taylor and Jacob Goscinski. He is survived by his siblings Joseph Tozzi, Anna Bergamini and Grace Salerno, and many nieces and nephews who he loved dearly. He will be remembered for his generous spirit, love of life and gift of humor. He was a member of American Legion Post 170 in Rochelle Park, N.J.