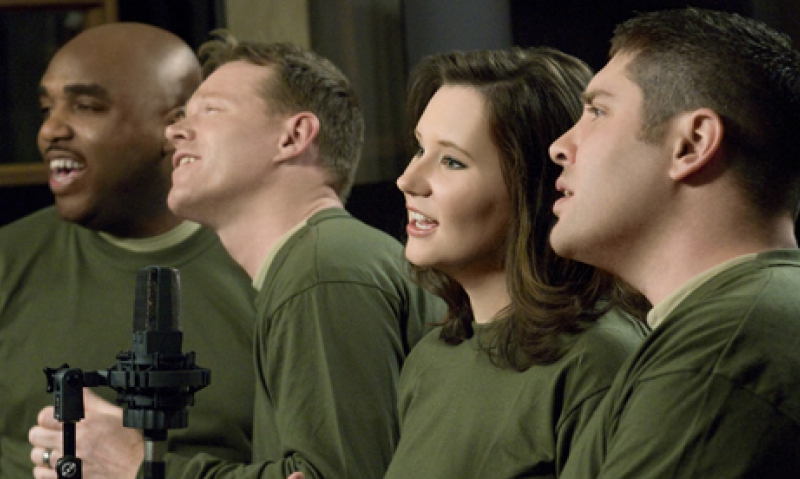 4Troops, an official vocal group of The American Legion, is offering Legionnaires a discount on its debut album, set for release May 11, during Armed Forces Week.

From April 27 to May 10, members can get $2 off a CD purchase at Amazon. Click here to purchase the album, using the coupon code al4troop.

A portion of the proceeds go to The American Legion Legacy Scholarship fund, which benefits children of U.S. military personnel who died on or after Sept. 11, 2001.

Scheduled to perform at the Legion's 92nd National Convention in Milwaukee on Aug. 30 and 31, 4Troops is a quartet of four Army combat veterans and Legionnaires: Meredith Melcher, Daniel Jens, Ron Henry and David Clemo. Each was chosen by Sony executives, who wanted to create a musical group that could "sing on behalf of all troops, to honor their sacrifices and to create awareness for their needs."

Melcher served as a platoon leader in Iraq, overseeing ambulance evacuations of wounded Americans and Iraqis. Jens enlisted after 9/11 and did a tour in Iraq before becoming a finalist on NBC's "America's Got Talent." Henry served with the 101st Airborne in Iraq, and Clemo provided communications and logistics support for the 18th Airborne in Afghanistan.4Troops is directed by Victor Hurtado, production director of the Army Soldier Show, created by Sgt. Israel Beilin - better known as Irving Berlin - in 1918.

The group's first single, "For Freedom," was released in March. Written by Matt Moran, the song is a patriotic tune written for his grandfather, a World War II veteran. The album also features covers of Toby Keith's "Courtesy of the Red, White and Blue," Lonestar's "I'm Already There," Sarah Maclachlan's "Angel," "Galveston," popularized by Glen Campbell, and a new song by Hurtado titled "Here We've Been."

Sony Music will donate 50 cents from each sale of 4Troops' album in the United States to organizations that support veterans and their families. The donations will be split equally among The American Legion, Iraq and Afghanistan Veterans of America (IAVA), Intrepid Fallen Heroes Fund (IFHF) and the USO.

For more information about 4Troops, visit the group's Web site.