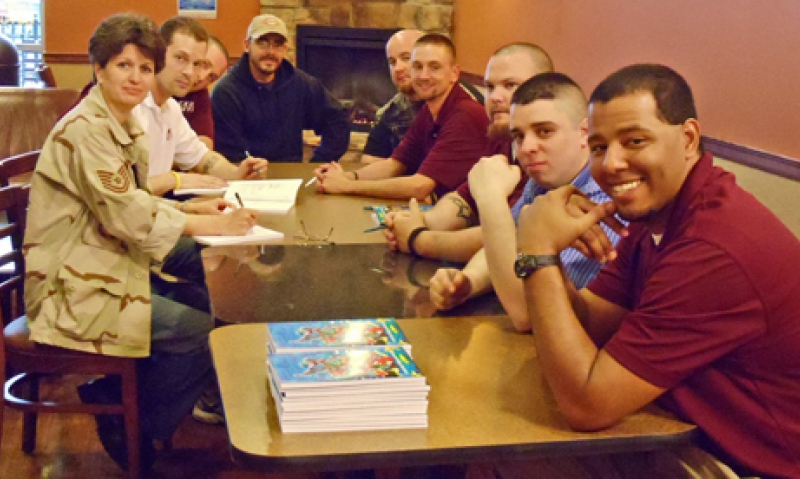 The "Journal of Military Experience" authors have unique military experiences but came together to write about them in their student publication at Eastern Kentucky University.

English writer D.H. Lawrence is quoted as saying that "one sheds one's sickness in books." It's an adage that has stood the test of time, as generations of writers have taken pen to pad - or fingertips to keyboards - to relieve their ailments. Modern psychiatrity calls this "bibliotherapy." As a cognitive treatment, it's as effective today as it was in the 19th century.

Bliotherapy can also ease symptoms of post-traumatic stress and other combat-related anxieties. A group of student veterans at Eastern Kentucky University have tangible proof of this in "The Journal of Military Experience," a book they wrote, edited and self published. The JME is a 135-page book full of memoirs, poems, stories and personal reflections, all written by veterans at the school who have recently left the military and are now coming to terms with a civilian existence of classes, homework and extracurricalur activities. Their pieces are cathartic, emotional, insightful and often deeply personal - written expressions of feelings about life in uniform. The process is often therapeutic.

"I've had students who were in here thanking me, saying it's been a big influence on them, and it helped them a lot," says Travis Martin, JME editor and adviser at Eastern Kentucky's VA offices. "There's kind of an insecurity that goes with taking off the uniform. This gave them something to take pride in."

The JME contains personal stories in a variety of literary forms. Some authors take a diary-like approach to their entries, writing about everyday tasks that illuminate the monotony of duty, like sorting laundry in the desert heat or preparing for inspection in living quarters that can never be completely free of sand.

Other narratives offer introspective accounts of life-or-death situations and give glimpses of the lasting psychological effects they have on their authors. Michael Conn, a combat engineer in Afghanistan and sophomore at EKU, recounted a scene in which he and his platoon sifted through the wreckage of an American Humvee that hit an IED. Encaged inside the twisted metal frame were the charred bodies of U.S. soldiers.

"I remember those burning soldiers more clearly now than when I experienced them in Afghanistan," Conn writes. "I didn't know them. I have no memories of these men. I only knew them in death. Still, I feel like we developed the strongest of bonds as we lifted them into their carriage. In retrospect, it felt as if I were a pallbearer, walking a dear friend on his last journey through the corporeal world.

"Perhaps the ability to write and reflect on this memory has had an unconscious healing effect on my former (pre-war) self. While that self has come full circle, the self that exists today - who writes this story - is still trying to make sense of it all. I will never be the same. I think I will remain a man with terrible, haunting memories. In time, I will learn to accept what was. I may heal, but I will forever be scarred."

The journal is a personal project for Martin, who contributed the introduction and a harrowing narrative of his own experience serving as the lead gunner of a supply convoy in Iraq. Martin describes his innermost thoughts and the mental strain he faced each day trying to identify insurgents embedded among the civilians - a responsibility that hinged on split-second decisions, which, if made incorrectly, could leave innocent people dead.

"Essentially, I am an ordained minister for the would-be-god, otherwise known as the United States Army," writes Martin, who came home with post-traumatic stress. "I interpret this false god's laws, dictating life and death and separating the innocent from the wicked. But I am a generous dictator; it is my job to determine who lives and who dies, but I believe that if at all possible no one should have to die."

After wrapping up his second tour in Iraq in 2005, Martin attended EKU, a state school of about 16,000 students located in Richmond, Ky. An English major, Martin's PTS made daily life as a student difficult. In particular, he felt uneasy during classes where war or politics were discussed.

"I found myself angry because I did not feel as if the instructor was credible or that the other students had a right to make judgments or draw conclusions about the subject matter," he says. "Later, I learned that my experiences were extremely valuable. If I could get past the symptoms, I could bring a unique perspective to the study of war literature. So, I stared forcing myself to read about war."

That was the start of something ambitious. He researched military authors dating as far back as the Civil War, analyzing their writings and looking for influences of PTS or traumatic brain injury. He worked his way up to Iraq and Afghanistan, using memoirs from both war theaters as subjects for his graduate thesis.

"My goal was to slowly get to the point where I could deal with my own experience," he says.

Eventually, he reached a place where he was not only dealing with his experiences in Iraq, but he was writing about them as well. He discovered peace of mind from it and decided it was something he wanted to bring to other EKU student veterans who might be dealing with similar stress-related anxieties.

After graduating, he took a job as an adviser with his school's VA office. The position required him to teach a special outreach course for student veterans. In it, he found a fitting platform for introducing bibliotherapy. Instead of giving tests, he gave his students assignments to write about their military experiences.

The stories that emerged from the assignment gave "The Journal of Military Experience" its literary foundation. It grew to become a publication for any of the school's veterans, who want to share their words not only to achieve therapeutic gains but also to educate EKU's civilian population about military life. The JME quickly became available at bookstores on campus and through Amazon.com. Proceeds from the sales fund future editions and provide scholarship dollars for veterans.

"(Eastern Kentucky) sees its success and the benefits to the veteran authors," Martin says. "They are supporting its continuation."

Already published and widely available, the JME is soliciting entries from EKU veterans for its second edition. As long as veterans are heading to EKU's campus and leaving behind a military life that is a stark contrast to classrooms and lecture halls, the publication figures to have a place in school curriculum.