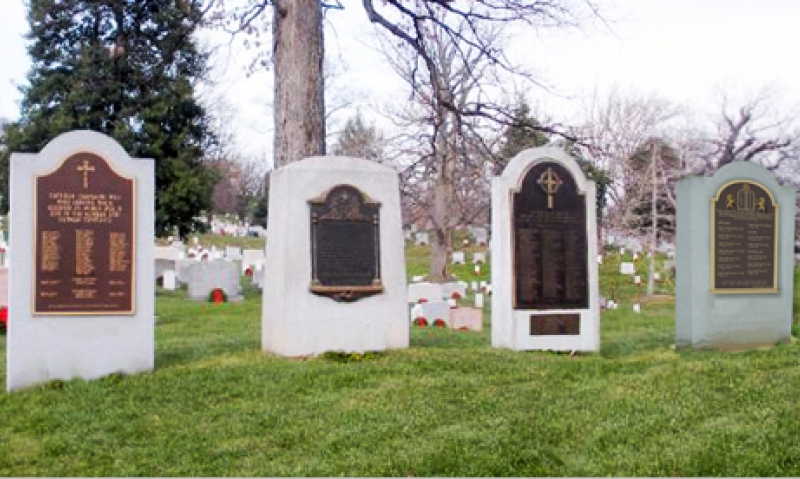 The Jewish Chaplains Monument (simulated on right) will stand alongside memorials to fallen Catholic, Protestant and World War I chaplains. Photo by Craig Roberts

On October 24, thanks to several years of persistent inter-faith advocacy and recent action in Congress, a conspicuously empty space on a knoll in Arlington National Cemetery will be filled with a long-overdue monument to Jewish chaplains.

In a sense, the story of the soon-to-be erected Jewish Chaplains Monument at Arlington begins in the North Atlantic near Greenland on the frigid night of Feb. 3, 1943. It was then that a German U-boat torpedoed the U.S. Army troop transport ship Dorchester. The troopship carried 902 service men, merchant seamen and civilian war workers. Among those aboard were four Army chaplains, Lt. George L. Fox, a Methodist; Lt. John P. Washington, Roman Catholic; Lt. Clark V. Poling, Dutch Reformed; and Lt. Alexander D. Goode, who was Jewish.

All but 230 on the Dorchester perished in the sinking, but of those who survived, some owed their lives to the four chaplains. These men of God stayed aboard the stricken ship, offering the terrified, fleeing crew and passengers comfort with encouragement and prayers. They also handed out life jackets including, in the end, their own.

Almost 70 years later, Sons of The American Legion member Ken Kraetzer of New York, during a visit to Arlington National Cemetery, climbed Chaplains Hill where three monuments stand to honor military clergymen who have died in service. Besides wishing to see the inscribed names of honored chaplains who had been alumni of his alma mater, Providence College, Kraetzer wanted to view a remembrance of World War II's fabled four chaplains. As Kraetzer tells it, "I was familiar with their story because of the Four Chaplains Mass held each year by the Dobbs Ferry, N.Y., post. Legion posts around the country deserve credit for keeping the four chaplains' story alive for now six decades."

In 2006, The American Legion passed a national resolution calling for Medals of Honor for each of the four chaplains.

Kraetzer found three names, but not a fourth. Father Washington was remembered on the Catholic chaplains stone. Rev. Fox and Rev. Poling were celebrated on a monument dedicated to Protestant chaplains. But there was no mention of Rabbi Alexander Goode. In fact, as Kraetzer discovered, there was no monument to Jewish chaplains at all.

"When I realized that Jewish chaplains were not honored at Arlington," says Kraetzer, "I called the Jewish War Veterans. They were not aware of this. They, in turn, suggested I call Adm. Harold Robinson, and we have been on a mission ever since."

Retired Navy Chaplain Rear Adm. Rabbi Harold L. Robinson is Director of the Jewish Welfare Board's Jewish Chaplains Council. He served in the Navy for 36 years with many overseas active-duty assignments. In the latter years of his tenure he visited troops in Iraq, Afghanistan, Qatar and Kuwait. He has been awarded the Distinguished Service Medal, the Legion of Merit, the Meritorious Service Medal, the Naval Commendation Medal with two Gold Stars, and the Navy and Marine Corps Overseas Deployment Ribbon. The American Legion spoke with Rabbi Robinson recently about the campaign to erect a Jewish Chaplains Monument.

THE AMERICAN LEGION: What is the status of the project?

ADMIRAL HAROLD L. ROBINSON: We are just a couple of bureaucratic niceties away from casting the bronze plaque and contracting to have the monument erected - planning a dedication ceremony for the fall and an educational tour with the bronze plaque also in the fall and (publishing) a brochure about the role of chaplains in the United States military.

Q: What is your personal history with this campaign?A: It actually goes back about three years when Ken (Kraetzer) called me and said he'd been to Arlington and discovered the incongruity, the lack of symmetry, the lack of monument for the rabbis who had died in service. He said, "What are we going to do about it?" I said, "We're going to get together and fix it." So, I've been with him since the very beginning. We've been trying to deal with both the requirements for establishing a memorial and - I've got to tell you - sometimes it just comes down to bureaucrats being bureaucrats. We have been raising funds and designing the memorial and presenting the project to both sponsors in the House and Senate and to the U.S. Fine Arts Commission. We have had a lot of help from a guy named Sol Moglen who established a memorial for 9/11 first responders. So that is my involvement.

Q: Who designed the monument?

A: A woman named Deborah Jackson who also works with the 9/11 First Responders Memorial, the wall of remembrance, in Brooklyn. She is a New York-area artist and has done a great job. Her design, as much as possible, replicates the design that exists on the other memorials there in Arlington. Part of America's greatness has been the ability to see ourselves as a multi-faith, multi-ethic, multi-racial nation. It has taken a long time to grow into that, but certainly by World War II we understood ourselves to be at least Catholic, Protestant and Jewish. And our chaplain service supported troops whether they were Protestant, Catholic or Jewish. Every chaplain felt the responsibility for every soldier, sailor, airman, Marine, or Coast Guardsmen. So we wanted the monuments to be symmetrical, representing the symmetry that exists in the Chaplain Corps, which is a unique institution. No other country has a Chaplain Corps such as ours.

Q: To what do you attribute this obvious oversight?

A: How come it wasn't done before? We don't know why. Lost in history? Each of the monuments that are there were established by their respective communities. I don't know why the Jewish community didn't do that. I don't know if the Jewish community was aware that it wasn't doing it. As for the Catholics, I'm speculating now ... I think it was easier (for them) because it's one faith group, one endorser. With the Protestants, you have almost 200 faith groups and for the Jews we have a number - Reform, Conservative, Orthodox and others. The real answer is, I don't have an answer.

Q: Obviously, you have an emotional investment in this project.

A: Well, yeah. One of the things we know is that you don't leave somebody behind. When a unit comes home you bring everybody home. Not everybody comes home the same way, but you bring everybody home. And there is a real sense for any of us who have ever served that if we couldn't bring these folks home in body, at least we bring home their names. It's time for them (the Jewish chaplains) to be memorialized, along with their compatriots. So we are doing that. I think it is a debt that we owe them.

It's interesting the response that we have gotten from the (Jewish chaplains') families has been very powerful. One fellow who was, I guess 5 or 6 when his dad went off to Vietnam and never came home, was overwhelmed when the House passed the monument bill because not only is his dad's service but his family's service in a real sense being acknowledged. As Adm. Mullen points out and Michelle Obama and Jill Biden are pointing out, too, it's not just the servicemember who serves, it's the whole family. That service continues in a palpably powerful way if there's the loss of a servicemember because that family is forever without that father or that brother or that son.

(This project has) been very, very heartwarming and very moving, and I imagine the memorial's dedication will be altogether overwhelming, for me at least. I will give you one story that is only meant to evoke a tiny fraction of a feeling. Obviously as a chaplain I went overseas a number of times, mostly for Jewish holidays. Just before I retired I went to do the High Holidays in theater. Our kids by that time were grown and out of the house. My wife and I were alone and, as I was leaving, she hugged me, overwhelmed with tears - crying. Now, she had never said anything to me before as I was leaving other than "you're doing something wonderful, we're so proud of you, everything will be all right back here at home." But this time, overwhelmed with tears - and, remember, by this time the kids are out of the house - she said, "I can't believe you're leaving us again." She knew I was an admiral, I was going to be safe, but she had 36 years of pent-up emotion. And she had always gotten me home. Imagine how that would have been had I gone off 36 years ago and not come back, leaving her with two little kids. It's a touchstone moment for me, because it's only a tiny, fractional sense, just the aroma of the real taste of loss. I'll never forget that moment as a connecting point with how families must feel when a loved one is lost forever.